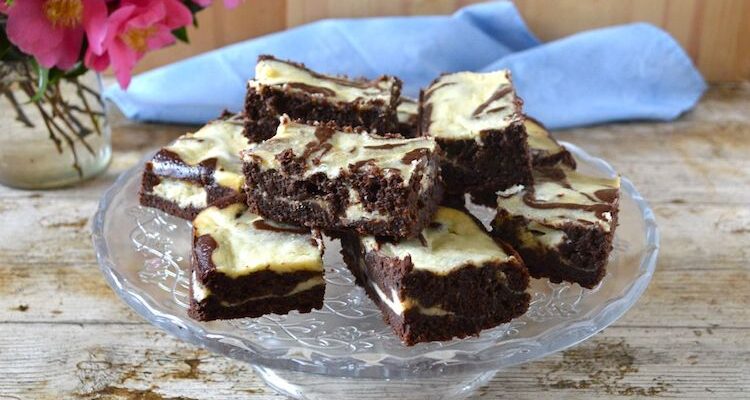 As regular readers will know, I can’t resist a brownie. I have many recipes for them on the blog, but there are still so many to try. These black velvet cheesecake swirl brownies with stout caramel sauce were the happy result of two events fortuitously coinciding. It was a no brainer; I had to make them. The third event, is of course We Should Cocoa, the blogger’s monthly, “we need chocolate”.

It’s rare for me to get my hands on a Waitrose Magazine, so on the odd occasions I do, it’s a real treat. I managed to get a copy of the February edition last month and there, screaming at me, was a recipe for black velvet brownies. They had my name written all over them.

At the very same time CT’s nephew turned up with some bottles of hand-crafted ale – unfiltered and unpasturised. He’s in the lucky position of being head brewer at Gloucester Brewery – a fine job if you like good beer.

The recipe required stout, a rather unusual ingredient for brownies that intrigued me. It turned out that one of the ales, Dockside Dark, was a stout-like beer that had notes of coffee and chocolate with a subtle sweetness.

I’m not much of a beer drinker, but I did try a mouthful and it was rather good. Perfect, as it turned out, for these black velvet cheesecake swirl brownies. It also made a mighty fine stout caramel sauce, which has to be tasted to be properly appreciated.

The brownies were sublime. I changed the recipe, as I always do and used a few different ingredients. Like most brownies, they are very sweet, but the stout ameliorated the sweetness to some extent. The creamy cheesecake swirl made a great foil to the robust earthiness of the stout.

I wasn’t going to make the caramel sauce to begin with, but on second thoughts it seemed a good way to use up the remaining stout. I’m so glad I did as not only was the stout caramel sauce delicious in its own right, but it adds an extra and welcome dimension to the brownies. It tastes deep and rich with bitter tones, but also nutty notes which I wasn’t expecting.

These black velvet cheesecake swirl brownies with stout caramel sauce are truly decadent. They are rich and dark with plenty of chocolate. It turned out, stout wasn’t the only unusual ingredient as I included rye flour too.

They’d make a fantastic afternoon tea treat or dessert for a dinner party, especially served slightly warm with hot sauce. The day after baking, the brownies had reached their peak, displaying a fudgy consistency which was quite irresistible.

Thanks for visiting Tin and Thyme. If you make these decadent brownies, with or without the stout caramel sauce, I’d love to hear about it in the comments below. And do please rate the recipe. Have you any top tips? Do share photos on social media too and use the hashtag #tinandthyme, so I can spot them.

If you’d like more cheesecake recipes, follow the link and you’ll find I have quite a lot of them. All delicious, of course.

These black velvet cheesecake swirl brownies with stout caramel sauce are my entry to this month’s #WeShouldCocoa. There is a lot of dark chocolate in the brownies and some in the sauce too.

Previous Post: « Chilli Roasted Oca with Hedgerow Pesto: Two Recipes for the Price of One
Next Post: Huevos Rancheros with Smashed Avocado »