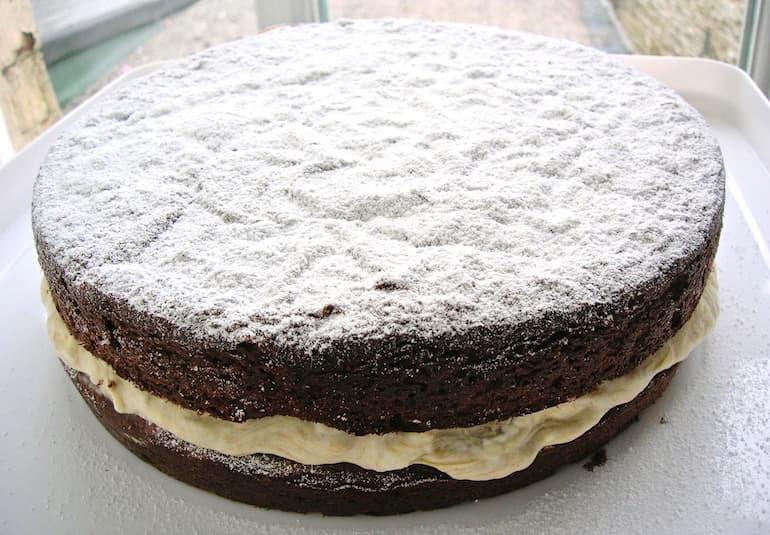 Since I started this blog, my friends seem to have had a lot of “significant” birthdays. Is this just a weird coincidence or is it because I’m more aware of these things now I’m doing my blog and always seem to have cakes on the brain – rhetorical question. Last year we went to a 30th, a 40th, a 50th, a 60th and a 70th birthday party. I thought that was rather unusual.

A couple of weeks ago, we were off to the 2nd 60th birthday party this year. So, with some rhubarb to use up, I made yet another rhubarb and chocolate cake.

Part of the celebrations included painting a mural on a barn wall. What a lovely idea. Unfortunately, the rather wet weather we experienced prevented this happening. I suspected the planned bbq wouldn’t go ahead either and to be honest it wasn’t a rip roaring success.

Luckily there was still plenty of delicious food to be had in the house.

Despite the wretched weather, the party was a lively and fun affair. Amazingly, or possibly not, given it was a birthday, one large table was completely laden with cakes. Spoilt for choice was an understatement. I was rather perturbed, wondering who would go for my relatively plain looking cake. But hey, I needn’t have worried.

It seems I have a following and those in the know homed straight in on my cake. I’m glad to say they were not disappointed. This was a great tasting cake. The sponge was even better than a similar one I made a while back with strawberries. And the rhubarb orange cream was gorgeous and complemented the chocolate really well.

The rhubarb cream is really delicious. All you need to do is cook up some rhubarb with sugar and a little orange juice. Once it’s cool add a spoonful of orange liqueur if you like that idea, then fold the lot into some whipped cream.

I had a substantial amount left over, which we had over the following couple of days with strawberries. Yum. But I’ve put a more modest quantity in the recipe, which is just right to fill this cake. However, if you want some to use for other purposes, just double or triple the quantities.

Melt the chocolate over the pan of rhubarb as it cooks. It only takes a few minutes for the chocolate to melt. As soon as you’ve removed the pan, the rhubarb juice can start to evaporate. This is how I do it as it saves a little bit of washing up and general clutter.

If you don’t want the lines of the cooling rack to appear on top of your cake, cover the rack with a clean tea towel. Then turn your cakes out to cool on top of the cloth covered rack. This does create additional washing, so I only do this for special occasions.

Swap the rhubarb cream filling for strawberries and cream or raspberries and cream. Just slice the fruit and fold into the cream with a spoonful of icing sugar. They’re super delicious too.

Thanks for visiting Tin and Thyme. If you bake this rhubarb and orange chocolate cake, I’d love to hear about it in the comments below. And do please rate the recipe. Have you any top tips? Do share photos on social media too and use the hashtag #tinandthyme, so I can spot them.

If you’d like more rhubarb recipes, follow the link and you’ll find I have quite a lot of them. All delicious, of course.

Previous Post: « Fun, But No Buns in Bath
Next Post: Blueberry White Chocolate Cake With Labneh and Rose »