A nutty wholemeal pastry case, filled with delicious almond and amaretto frangipane which is itself topped with juicy plums. This plum almond tart is a classic comfort food dessert which is as good served at a dinner party as it is for afternoon tea. It’s delicious all on its own, but also excellent with clotted cream or crème fraîche. 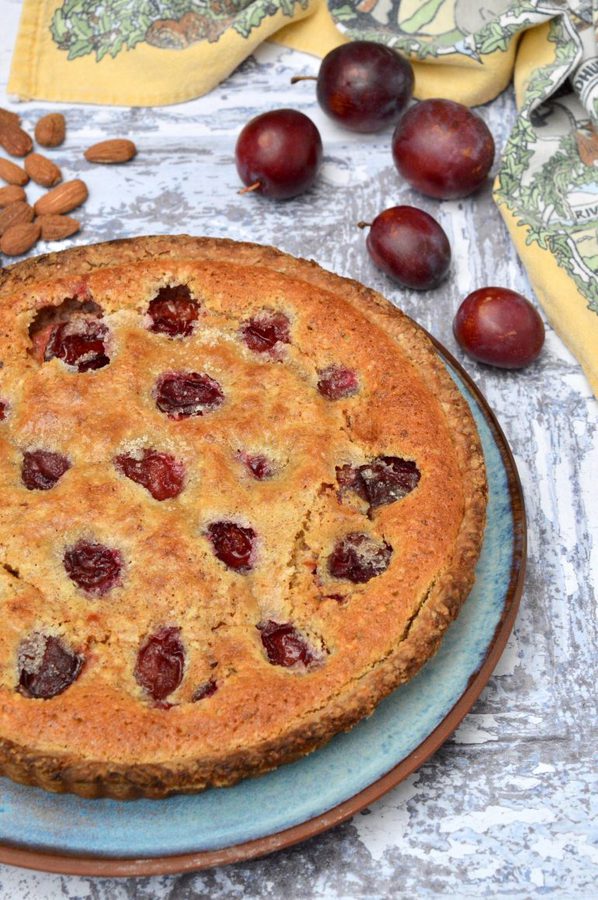 CT adores fruity frangipane tarts, but he doesn’t get to eat them very often. I like them too, but they’re not something I make on a regular basis as they require a bit more effort than some other desserts. The only other one I have on the blog is for this apricot frangipane tart with a chocolate crust. But whenever I do bake one, I wonder why I don’t make them more often, because they’re irresistible.

When CT came home from work last week with a big bag of plums, I thought he deserved some sort of reward. There were both yellow and purple plums, though we’re not quite sure what either of the varieties are. I made a batch of plum jam with the golden plums and this plum almond frangipane tart with the purple ones. Oh! And a bonus plum galette too.

Frangipane is a pastry cream made with butter, sugar, eggs and most commonly almonds, although you can use pistachios too. There’s usually a small amount of flour included, but not always. I’ve not used it in this rhubarb pasty pie, for example.

Frangipane is a French term, originating in the 17th century, but its derivation is not entirely clear. Although it’s an almond paste, it has a creamy consistency and is something quite different to marzipan. It’s a baker’s classic and is used in all sorts of French pastries such as pithiviers and galette des rois.

For us Brits, Bakewell tart is probably the most famous frangipane tart out there. As the name suggests, this originated in the town of Bakewell in Derbyshire. This has to be a baker’s dream name.

This plum almond tart is not a Bakewell tart, however. Bakewell tarts have a layer of jam between the pastry and the frangipane and that’s where the fruit element starts and finishes.

The fiddliest part of this plum almond tart recipe is making the pastry. Once you’ve done that, the rest is a breeze. The final result is a thing of glory and well worth the effort.

You can eat it warm, but it’s probably at its best served at room temperature. We like to go for full indulgence and enjoy it with a dollop of clotted cream. But it’s also delicious on its own or with crème fraîche or even ice cream.

I use my ab fab wholemeal yoghurt pastry for this plum almond tart. It always works a treat. It produces delicious flaky pastry with nutty notes and unlike traditional wholemeal pastry, it doesn’t fall apart when you roll it.

My flour of choice is wholemeal spelt flour. It’s my favourite pastry flour and you can find out the reasons why if you click on the link.

Depending on how thinly you roll the pastry, you may have some left over. If you do have any surplus and some additional plums too, you can also make a mini plum galette. I made one which served the two of us from my leftover pastry. There’s more on this further down the post.

Frangipane is really easy to make, as long as your butter is soft. All you need to do is cream butter and sugar together, beat in an egg then add ground almonds and flour. As almonds are key to this recipe and the flavour complements plums rather beautifully, I add some amaretto to the mix. If you don’t have any or would rather not use alcohol, just add a little almond extract instead.

When it comes to the ground almonds, I prefer to grind my own nuts in most instances. The nuts are much fresher if you grind them as and when you need them, but they also have more texture. You can see from the photo that there’s a mix of both fine and also nubbly bits.

There is much controversy around almond skins. Some say they’re really good for you with lots of fibre, vitamins, minerals and polyphenols. They’re also good for the digestion. Others say they’re bad for the digestion. Whilst the jury is still out on this, I prefer to use whole almonds. This gives the frangipane a flecked look, but I quite like that. As with most recipes, there are always choices if you want them.

You can use whatever plums you like for this tart, but medium sized or small ones are best. If you have really large plums you won’t need as many and it’s best to cut them into quarters rather than halves.

Halve the plums and remove the stones. Place the plum halves, face down, onto the filling in a decorative pattern and so that most of it is covered. Push the plums into the filling a little so that they’re firmly embedded, then sprinkle with the remaining sugar.

The plum almond tart is now ready to go into the oven. Bake it for about thirty minutes, when it should be nicely risen, golden and firm to the touch. Then leave to cool before removing from the tin.

It will keep well at room temperature for twenty four hours. But if you want it to last for another day or so, keep it in the fridge and away from CT.

As I rolled my pastry quite thinly for the plum almond tart case, I had enough left over to make a plum galette which was just big enough for the two of us.

The plum galette is really simple to make and you only need three ingredients: pastry, plums and sugar. It’s also really delicious and allows the plums to take centre stage and sing out loud.

I cut the plums into quarters for this recipe and crammed as many onto the pastry base as I could. It’s important to leave a border of at least one and a half centimetres, so that you can fold it over the plums to contain them. The final step before popping the galette into the oven is to sprinkle it with demerara sugar. I went with a tablespoonful as my plums were a little on the tart side.

The plums I used were juicer than I expected and a lot of scarlet fluid ran out over the baking tray whilst the galette was in the oven. Remarkably, this didn’t effect the flakiness of the pastry and the bottom wasn’t soggy.

You could, of course, forget the frangipane and just make one large plum galette. It’s nice to have a choice. Both are delicious, although they’re very different.

For more guidance on how to make a fruit galette, take a look at my recipe for rhubarb galette, gooseberry galette or double blackberry galette.

Thanks for visiting Tin and Thyme. If you bake this plum almond tart or the plum galette, I’d love to hear about it in the comments below. And do please rate it. Have you any top tips? Do share photos on social media too and use the hashtag #tinandthyme, so I can spot them.

If you’d like more pastry recipes, follow the link and you’ll find I have quite a lot of them. All delicious, of course.

I’m sharing this recipe for plum almond tart with Lost in Food for #CookBlogShare.