One crumble recipe, eleven different desserts. This recipe for classic rhubarb crumble is made with only four ingredients. But in case you want something a little fancier, you’ll find ten easy ways to add variety and flavour. 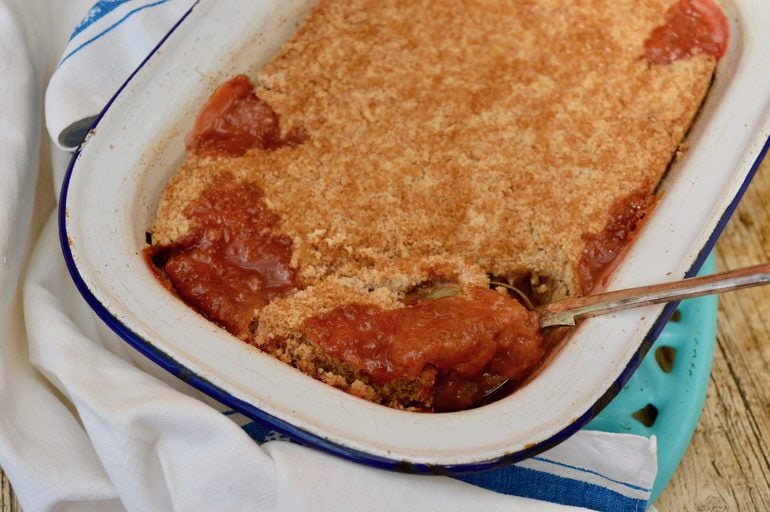 Rhubarb crumble is a classic British pudding and everyone seems to have their own version of it. It’s absolutely delicious served warm with custard, although cream is good too.

Sometimes, you just want a basic recipe with no frills and furbelows. And this classic rhubarb crumble pares things right down to the basics. It contains only four ingredients and is really quick and easy to prepare. It’s also absolutely delicious.

I adore rhubarb and always look forward to the season. This is the first year for many years that we’ve harvested our own and it’s really quite exciting. With the first of the crop, I just want to make a rhubarb crumble.

The crumble takes a little while to cook, but the hands on bit only lasts for ten minutes. All you need to do is chop some rhubarb. Place it in a greased oven proof dish and sprinkle some sugar over the top. Then rub butter into wholemeal flour along with a bit more sugar and spoon over the rhubarb. And bake! So simple, so quick, so easy.

Don’t worry too much about quantities. After all, this is your crumble and you should make it exactly how you like it or according to how much rhubarb you have. If you’ve got a bit more rhubarb, so much the better. Maybe you’ve got less, that’s fine too. If you prefer to have less or more crumble, just decrease or increase the amounts accordingly.

How To Tell When Your Crumble is Done

You know your crumble is done when the fruit is cooked and the crumble is golden. As you can see from the photo above, some of the fruit will have bubbled up through the top. That’s also a sign that it’s done.

A good crumble falls into three distinct layers, sometimes four. There’s a rhubarb layer at the bottom, then a layer where the rhubarb juices soak into the crumble as it cooks. That’s the best bit I reckon. Then you have the crumbly top. You can also get a crunchy top layer, but you’ll need to look at one of my ten variations for that.

Rhubarb crumble is best served warm. Leave it for five minutes or so after it comes out of the oven. Because if it’s too hot it’s likely to burn your mouth. Serve it with warm custard, pouring cream, ice-cream or for a special treat, clotted cream. ‘Ansum.

Rhubarb is quite sour, so depending on how sweet you like your puddings, you may want to add a little more or a little less than the stated amount of sugar in the recipe. I don’t like my fruit to be too sour, but nor to I like overly sweet puddings.

You can use any type of sugar in this classic rhubarb crumble. Each one will give a different taste and texture. I like to use demerara sugar with the rhubarb as it just seems to work well with it. But I prefer golden caster sugar for the crumble. It’s easy to mix in, doesn’t colour the crumble and the flavour isn’t as overt as most of the others. Muscovado will give varying degrees of caramel notes, depending whether you use light or dark. Other brown sugars will do much the same thing.

How To Make Vegan Rhubarb Crumble?

The humble crumble is a particularly easy pudding to veganise. All you need to do is swap the butter for solid coconut oil or a vegan butter. I use coconut oil as it doesn’t have any additives and it also gives a nice coconutty flavour.

Can You Make Gluten-Free Rhubarb Crumble?

Yes you can. Similar to the vegan version, all that’s needed to make this classic rhubarb crumble gluten-free is a simple swap. Use your favourite gluten-free flour instead of wholemeal wheat flour. I really like The Free From Fairy’s gluten free wholegrain flour.

How To Make Crumble Crumbly

If you’re making a crumble, you definitely want it to be crumbly. Just follow the recipe at the bottom of this post. Use a spoon and make sure you sprinkle the crumble over the top of your fruit. Don’t press it down afterwards.

At the start of the season, I always like to go for this basic rhubarb crumble recipe. There’s elegance in simplicity. And I really appreciate that lovely bracing fresh rhubarb flavour. However, when rhubarb becomes more abundant, I like to jazz it up a bit.

So here are ten variations you can make to this classic rhubarb crumble if you so wish. You can also mix and match and use several of the variations in one dish. The permutations are endless.

Sprinkle a tablespoonful of demerara sugar over the top of the crumble prior to baking.

The flavour of ginger pairs really well with rhubarb. You can do one of two things or even both. Chop some stem ginger and add it to the rhubarb along with some of the syrup. Or add some chopped crystallised ginger. If you prefer your ginger in the topping, then add a teaspoonful of ground ginger to the crumble ingredients.

Orange is another classic rhubarb partner. Squeeze the juice of the orange over the rhubarb before covering it with crumble. Then grate the zest into the crumble topping.

Rhubarb and strawberries isn’t an obvious pairing, but it’s an old one and a good one. Replace 100g of the rhubarb with strawberries.

Unless you’re a regular reader of Tin and Thyme, rhubarb and rose is a little known but effective partnership. I always use my homemade rose syrup, which is incredibly easy to make. But you can use rose water instead. If you use rose syrup, add two tablespoonfuls to the rhubarb prior to adding the crumble. But reduce the amount of sugar to 20g. For rose water, simply sprinkle a teaspoonful over the rhubarb.

Rhubarb and honey is another lovely combination, as I know from these rhubarb honey cakes. Just swap the sugar in the rhubarb part of the recipe for three tablespoons of honey.

Although many know about ginger, cardamom is another spice that complements the flavour of rhubarb. Cardamom is quite powerful, so it’s best to er on the side of caution. You can either add a ¼ of a teaspoon of ground cardamom to the rhubarb or to the crumble.

Nuts are lovely in a crumble topping. You can either use ground nuts or chopped nuts. Swap 50g of the flour for ground nuts. Or just add 50g chopped nuts after you’ve rubbed the butter into the flour. Ground almonds or chopped walnuts are my favourite nuts to use.

The addition of rolled oats makes for a chewy crumble topping with a subtle oaty flavour. Use 25g less flour and stir the oats into the crumble after you’ve rubbed the butter into the flour.

If you’re entertaining, you might want to serve something a little fancier than a humble crumble. Try roasted rhubarb with a crunchy topping tossed over the top. Cut the rhubarb into slim finger length batons. Sprinkle the sugar over the rhubarb and roast in the oven at 200℃ (400℉, Gas 6) for about ten minutes or until the rhubarb is soft, but still holding its shape.

For the crumble element, use the recipe in this apple crumble and custard cakes. Bake on the lower shelf of the oven whilst the rhubarb is roasting. You’ll need to stir it about half way through to make sure it doesn’t burn. Alternatively use the “base” recipe in this apricot whisky honey cheesecake. Sprinkle over the rhubarb just before serving. Or you could allow guests to sprinkle it on for themselves.

Other Rhubarb Puddings and Dessert Recipes

And for even more rhubarb recipes take a look at my rhubarb category.

Thanks for visiting Tin and Thyme. If you make this traditional rhubarb crumble, I’d love to hear about it in the comments below. And do please rate the recipe. Have you any top tips? Do share photos on social media too and use the hashtag #tinandthyme, so I can spot them.

If you’d like more pudding recipes, follow the link and you’ll find I have quite a lot of them. All delicious, of course.

To make a vegan version, swap the butter for solid coconut oil or vegan butter.For a gluten-free version, swap the wholemeal flour for gluten-free flour.You can easily half or double the quantities of this crumble. You’ll need a bit less cooking time for a smaller crumble and about ten minutes more for a larger one.Please note: calories and other nutritional information are per serving. They’re approximate and will depend on exact ingredients used.

I’m sharing this simple rhubarb crumble with Lost In Food for #CookBlogShare.