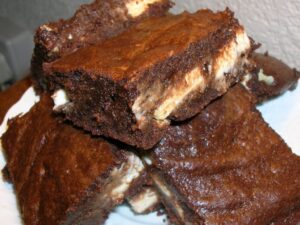 Last autumn if I had any occasion to make a cake, it was an apple & cider one using my own recipe. The apple season being over, I duly moved on to other things. Having recently come across an apple & cider recipe on Anyone for Seconds and having been given a bag of apples this weekend, I was all set to make an apple & cider cake. At the last minute, I realised I had forgotten to get any cider and with time fast running out and some cream cheese in the fridge, I ended up making something far more decadent – Nigella’s Cream Cheese Brownies.

This is what I did:
The tangy saltiness of the cheese cuts through the rich chocolatey confection – somewhat like a cheesecake, which I guess is what it is. That’s what my chief taster says anyway! He also thinks it’s absolutely delicious. The apple and cider cake will have to wait until next week.
Previous Post: « Ginger and Chocolate Flapjacks
Next Post: Homemade Muesli Breakfast Cereal »