When I received a pair of glamourous little white chocolate shoes, I knew immediately they would have to adorn a cake. And adorn the cake that I made for last week’s tea party they did. 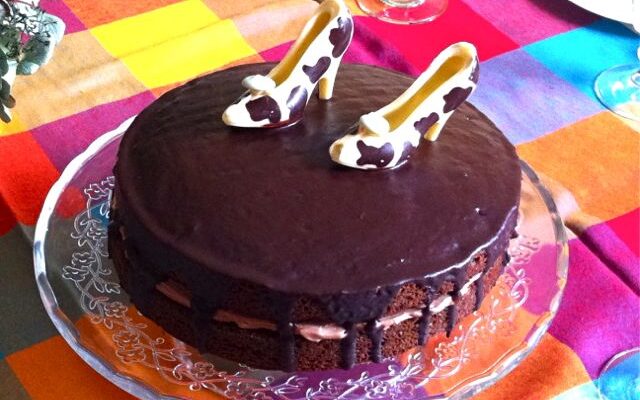 Given the theme of this month’s We Should Cocoa, that cake had to be an orange one. But as it was for WSC, it couldn’t just be any old orange cake, no, it had to be a bit more than that, so it became a tripe orange cake. I had a jar of bitter orange syrup left over from making candied orange peel, a bar of orange milk chocolate from Divine and some organic oranges, so with those all gathered up, I set to.

Three types of orange and three types of chocolate had the desired effect and this cake was truly delicious. The photographs are not of the best due to the poor light, but the cake had a real wow factor with those shoes strutting their stuff.
Although this cake was undoubtedly gorgeous and has to be my entry for We Should Cocoa, the orange and chocolate mince pies I made for the same party were absolutely delicious too and would otherwise have been a strong contender.
Previous Post: « Mince Pies with Orange Wholemeal Shortcrust Pastry
Next Post: Cranberry White Chocolate Cookies with Walnuts »