There were so many influences here, I’ve rather lost track of them all. Kath started me off with her crystallised violets. It all came flooding back, how I used to crystallise primroses every Easter when I was young. I haven’t done it for many years, but with Easter fast approaching, some holiday, a bit of nostalgia and with enthusiasm renewed, I wanted to try these again.
Then I saw the recipe for Paul A Young’s Simnel Brownies and I knew I would be making those in the not too distant future. But, having set my mind on using flowers, brownies didn’t seem quite the thing. They would, in fact, have been an ideal entry for the April We Should Cocoa, but I already had the Battenberg in mind for that. However, the simnel idea stuck – hummm, cupcakes would make a good show for crystallised flowers. I could add marzipan in the middle and maybe use some raisins. OK, what to soak the raisins in? Well, that was a no brainer, with the almond marzipan theme, it had to be amaretto. I then saw Carl’s lovely hidden hearts, which made me think, rather than just adding chunks of marzipan, I could roll it out and use a smallish cutter to fit the cupcakes exactly. Dan Lepard also played his part, by piping crosses onto some of his Easter cupcakes. Peggy of Fake It ‘Til You Make It very kindly sent me a wadge of disposable piping bags after I broke the reusable one I got for Christmas on the very first attempt – making macaroons. So thanks to Peggy, I thought I’d try Dan’s crosses. 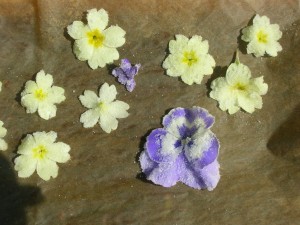 So, this is what I actually did: 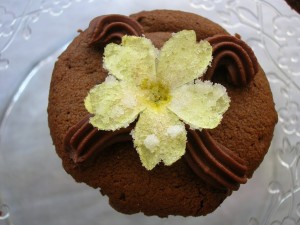 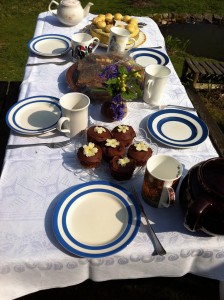 These featured at another Easter tea eaten in a Cornish garden as well as on the Easter platters. The primroses were delicious, they had a very subtle but distinctive floral taste as well as a rather unexpected crunch. As a flavour combination, these ingredients worked really well together. The amaretto just enhanced the marzipan flavour and the alcohol soaked raisins added another level of richness with the chocolate bringing it all together very nicely. The cakes were moist and truffle like and rather filling – nothing wrong with that of course. The chocolate topping gave yet another dimension and unusually for me, was just the right consistency. The piping I have yet to master.

I am entering these for Julia Parsons annual Easter Cake Bake – a mouth watering feast for the eye, if ever there was one. You can see all the entries there from previous years, although this year’s round up has yet to be posted. In fact you still have three days left to enter if you feel so inspired. 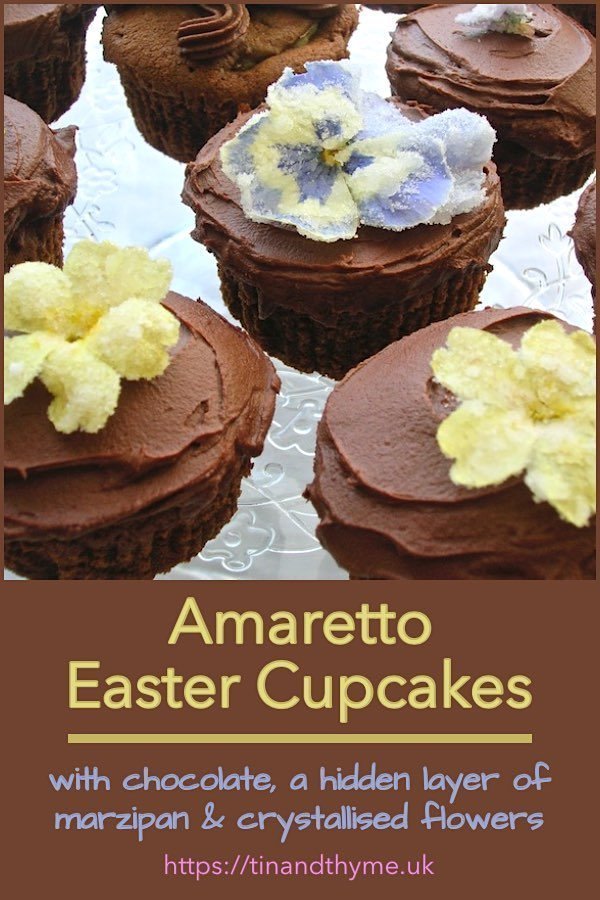