A really simple recipe for fried courgettes (zucchini), spiced with za’atar and served on a bed of minted yoghurt. It’s one of those easy to make, but super delicious side dishes. Wolf it down all on its own for a light lunch or supper, or use it to accompany a main meal or as part of a mezze spread. It’s that versatile. 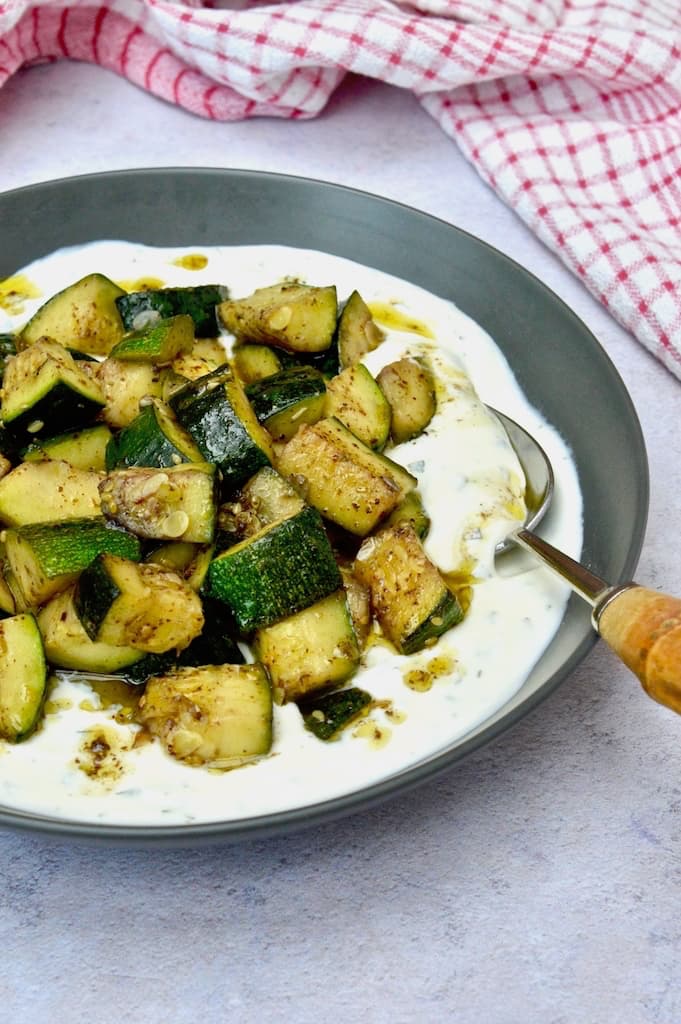 For some reason we were unsuccessful with our courgette (zucchini) seeds this year. We sowed several and they all refused to come up. Luckily a friend gave us two of his plants and they are now producing loads.

Every year, I can’t wait for those first homegrown courgettes. But then, before I quite know what’s going on, they’ve filled up the fridge. Feel familiar? Because of this courgette glut, I try and come up with a new recipe each year, so we don’t get bored.

This courgette and za’atar side dish served with yoghurt is my latest and I’ve made it several times already. It’s delicious and so very simple to make.

Za’taar is actually a herb. It’s a type of oregano, also called Syrian oregano, Origanum syriacum. It’s a rare and precious plant, much prized as the main ingredient in the Middle Eastern spice mix which bears its name.

Because yes, we know za’taar more commonly as a flavoursome Middle Eastern spice mix. Traditionally, this consists of the herb za’taar as well as toasted sesame seeds, thyme, salt and dried sumac. It’s sumac that gives it a unique zesty tang. Some mixes may also contain additional herbs or spices such as marjoram, parsley or cumin.

Given that Origanum syriacum is hard to get hold of, most commercial za’taar mixes are made with the more commonly found Origanum vulgare.

In the Middle East, za’atar is most often eaten with bread dipped in olive oil or labneh. But there are many other uses for it, including this excellent way to spice up courgettes.

I find Middle Eastern cuisine a huge inspiration when it comes to cooking. I love the layers of flavour and wholesome dishes packed with vegetables, herbs and spices. When it comes to courgettes, I often pair it with sumac. The lemony notes lift the blandness you can sometimes get with courgettes.

This courgette (zucchini) recipe works particularly well as a light lunch or supper, part of a mezze meal or as an accompaniment to other Middle Eastern dishes. Surprisingly, however, it also pairs well with Mexican dishes.

Courgettes cooked with za’atar are delicious in their own right. But accompany them with some lemony minted yoghurt and they notch up several levels.

There are only four ingredients needed to cook the courgettes and only three to make the minted yoghurt. There, I told you it was simple.

Although this courgette recipe is incredibly simple, I’ve included a step-by-step guide in case it’s useful. You’ll also find a few helpful hints as you go along.

Either use a large courgette (zucchini) or two smaller ones. Wash the courgette (s) and remove the top and bottom. Then chop it into bite size chunks.

Courgettes are possibly the easiest vegetables to chop and they take seconds.

Warm olive oil up in a non-stick pan over a moderate to high heat. Use extra virgin olive oil if you can. The better quality the oil, the more delicious your courgettes will taste. When there are so few ingredients, every one counts.

Slide the courgette chunks into the pan and fry for three minutes, stirring occasionally.

I use a cast iron skillet*. It’s my favourite pan by far and I use it a lot. It’s heavy to handle, but if you treat it well it rarely requires more than a quick wipe with a paper towel to clean.

Fry for a further four to five minutes, stirring occasionally. The courgette pieces should be just about cooked, but not mushy or brown.

Leave to cool slightly whilst you make the yoghurt.

Use your favourite spice mix instead of za’atar. Charmoula is good, but so is zhug or harissa. Or swap for dukkah and sprinkle it over the top once cooked.

Whilst the courgettes are cooling, prepare the mint and yoghurt.

Wash the mint, detach the leaves from the stalks, unless they’re nice and soft. Chop the leaves as finely as you can. The finer the mint, the more the flavour is distributed. I use a sharp knife, but you can get special herb choppers*.

Spoon the yoghurt into a mixing bowl and add the mint and lemon juice. Give it a good stir.

You’re now ready to assemble the final dish of courgettes with za’atar and yoghurt.

Spoon the yoghurt over a serving plate or bowl. Pile the courgettes over the top and drizzle with any oil left in the pan or extra if needed.

Courgettes don’t generally soak up much oil, but how much oil is left will depend on the courgettes, the pan, the heat and the time.

Serve the courgettes warm or at room temperature.

Courgettes With Yoghurt: Change it Up

Make Your Own Labneh

Labneh is very similar to Greek yoghurt, but it’s usually thicker as it’s strained for longer. It also usually contains salt. If you were in the Middle East, you’d likely be served labneh rather than Greek yoghurt in this type of dish.

If you want to have a go at making your own, it’s very easy, but it takes a while to strain.

Mix half a teaspoon of sea salt with five hundred grams of natural yoghurt. Line a sieve with a muslin cloth or tightly woven tea towel. Place the sieve over a bowl, then pour the yoghurt into the cloth lined sieve.

Gather the cloth edges together and tie with a piece of string or elastic band. Hang it up on a cupboard door handle or kitchen tap with the bowl underneath and leave the whey to drip out for twelve hours.

This should be about right for this courgette recipe. If you want an even thicker consistency, however, just leave it for a few more hours. Check it periodically until you get the consistency you’re looking for.

Serve the courgettes on a bed of lemony hummus instead of yoghurt. This will provide some protein as well as creaminess and contrasting flavour. Either make your own, or stir some lemon juice into a pot of commercial hummus.

You could try a natural vegan yoghurt, but I’ve not yet found one with the right flavour profile and consistency for this dish.

Thanks for visiting Tin and Thyme. If you make this dish of courgettes with yoghurt and za’atar, I’d love to hear about it in the comments below. And do please rate the recipe. Have you any top tips? Do share photos on social media too and use the hashtag #tinandthyme, so I can spot them.

If you’d like more courgette recipes, follow the link and you’ll find I have quite a lot of them. All delicious and nutritious, of course. You can also find over seventy recipes from food bloggers around the world in this post for All The Courgette Recipes You Will Ever Need.

Courgettes With Minted Yoghurt. PIN IT.

Courgettes with Za’atar and Yoghurt – The Recipe

Courgettes With Za’atar and Yoghurt

A really simple dish of fried courgettes, spiced with za'atar and served on a bed of minted yoghurt. Wolf it down all on its own for an easy lunch or supper, or use it to accompany a main meal or as part of a mezze spread. It's that versatile.
Prep Time7 mins
Cook Time8 mins
Total Time15 mins
Course: Side Dish
Cuisine: Middle Eastern
Keyword: courgettes, mint, yoghurt, za’atar
Servings: 4 people
Calories: 96kcal
Author: Choclette @ Tin and Thyme

Serves four as a side dish or two as a light lunch or supper.For even more pizzaz, try one or all of the following: Please note: calories and other nutritional information are per serving. They’re approximate and will depend on exact ingredients used.

I’m sharing this recipe for za’atar courgettes and minted yoghurt with My Dinner for #CookBlogShare.

Previous Post: « Easy Strawberry Ice Cream: Two Ways
Next Post: All The Courgette Recipes You Will Ever Need »