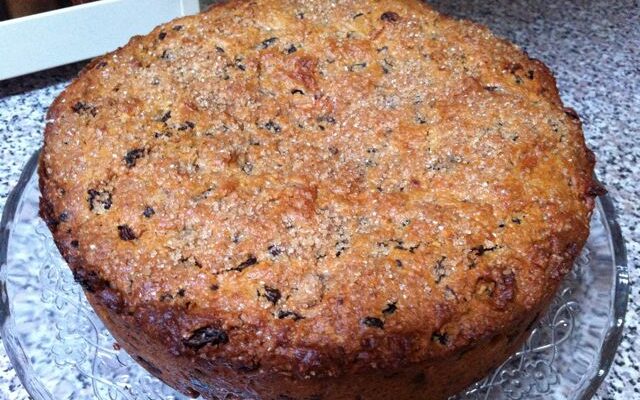 Vinegar in a cake? Well yes, it helps to make this egg-free fruit cake rise in a rather spectacular fashion. The vinegar cake has a nice soft crumb and is pleasantly fruity as well as malty with an unexpected sort of sprightliness about it.

Ros chose V for Alpha Bakes this month, oh my goodness! Other than Vanilla and Victoria sandwich, I wasn’t having many ideas and although vanilla is fantastic, it’s such a common ingredient in cakes, I wanted something a little different. I’ve seen Viennese whirls popping up all over the place which is a great idea, but again not quite what I was looking for.

So I turned to trusty Pam Corbin in her wonderful book Cakes and there it was at the bottom of the V list, Vinegar Cake. Traditionally, it was made by farmer’s wives when their hens were off lay. So it’s an eggless fruit cake and it comes from East Anglia. I changed things of course and added a few ingredients not mentioned in Pam’s recipe.

There’s quite a lot of fun to be had with this fruit cake. I watched in awe as the milk and vinegar mixture whooshed up when I added the bicarbonate of soda. It reminded me of one of those school science lessons which probably no longer occur due to health and safety reasons. Whatever the underlying chemistry of it all, it worked and the cake rose really well.

I used 1 tbsp mesquite powder and 1 tbsp maca powder, placed them on the scales then added plain flour to make the weight up to 250g. But I’ve omitted these from the recipe below.

As dried fruit is really plenty sweet enough already, I’ve only added a couple of spoonfuls of golden syrup to the mix. There is a little demerara sugar scattered over the top too. I used a mix of sultanas, raisins, chopped dried apples, goji berries and homemade crystallised orange peel.

Surprisingly, the taste of vinegar is only noticeable by its absence. It has a fabulous crunchy top and is lovely if you serve it warm with clotted cream or ice-cream. I’m not a fan of heavy fruit cakes, but this was just about right, plenty of fruit but plenty of cake too.

CT is also not a fan of heavy fruitcakes, which he associates with being dense, dry and desiccated with bucket loads of horrible mixed peel. This one, he opined, was pleasantly fruity with an unexpected sort of spritliness about it. It has a nice soft crumb and tastes slightly malty which I put down to the mesquite I added. We both felt thoroughly virtuous eating this because of the healthful properties of the maca I also included.

Thanks for visiting Tin and Thyme. If you make this vinegar cake, I’d love to hear about it in the comments below. Do share photos on social media too and use the hashtag #tinandthyme, so I can spot them. 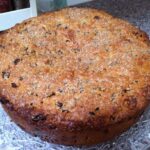