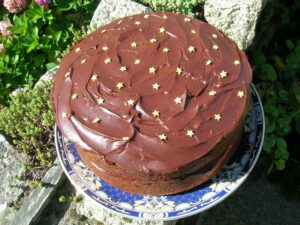 An extra large birthday cake was needed recently for a combined birthday and house warming celebration.  I was so impressed with the sponge that I made for the Chocolate Mocha Layer Cake earlier on this year, that I was determined to make it once again.  It is also quite a large cake.  The dilemma was what to sandwich and top it with.  As I was a bit unsure of the audience involved, I thought a general crowd pleaser would be the best option, so chocolate fudge icing it had to be.  This is what I did:

For once nothing went wrong with this cake and with four bars of chocolate in it, I was mightily relieved. It turned out as good as I could have wished for – in fact I was particularly proud of this one.  The cake disappeared as soon as it was cut into and I only just managed to save a couple of pieces for the host and hostess – it obviously wasn’t big enough after all.  Luckily, a friend saved me a bit of her slice or I would not have been able to verify that it was indeed as good as it looked.