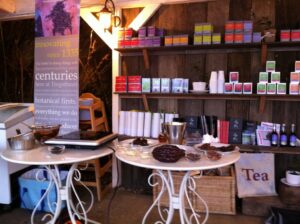 On what was meant to be a beautiful blue skied autumnal day but turned out to be a grey and extremely blustery one, we set off for the one of Cornwall’s posher parts, the Roseland Peninsula.  It was the beginning of Chocolate Week and we were heading down to a tea and chocolate tasting event at Smugglers Cottage & Tea House at Tolverne on the Tregothnan Estate.

This was to be a double act with Jonathan Jones, the tea expert at Tregothnan and Marc Demarquette. Can that be right? Not the famed London artisan chocolatier in the depths of Cornwall?  Yes indeed, it was National Chocolate Week and for once we were not going to be deprived of a top notch event.

But before I get carried away with chocolate and my new found enthusiasm for mixing the leaf and the bean, thanks to Matcha Chocolat, I’ll just insert a short garden tour. Trelissick is on the opposite side of the river Fal to Tolverne and as we don’t go down that way very often, we couldn’t miss the opportunity to pay a visit to these beautiful gardens.  I had imagined sitting in the autumn sunshine, warming my bones and banishing my cold whilst admiring the beautiful colours of the autumnal leaves.  What we got was a gale force wind, no sunshine and a fast stomp around the garden, actually it was more of a shuffle in my case – teeth chattering all the while.  We were more worried about avoiding falling branches from the trees than admiring their beauty.

To cross the river, we had to take the King Harry Ferry, which whilst rather romantic, had us reeling in shock after £7.50 was extracted from our reluctant hands for the privilege of the 5 minute crossing there and back.

So to the chocolate.  We were greeted warmly on arrival and offered a cup of tea to help stave off the cold whilst we waited for the others to arrive.  Tregothnan is the only grower and producer of tea in the UK and is now in its 5th year of production. Most of the teas they offer are grown on the estate in Cornwall. We were already familiar with their green tea, which we find clean and refreshing, so that’s the one we both chose.  We were also given a much anticipated and thus much appreciated chocolate to try, one from the beautifully decorated Demarquette Ganache Collection, Thai Lemongrass.

The Tea House is currently a temporary structure and more like a tea tent; plans for a more permanent (and hopefully more aesthetic) one are in the pipeline. We sat huddled around the stage with thoughtfully-provided blankets draped around shoulders and laps. Trying to tune in above the flapping canvas and the roaring wind, we were reminded that we don’t really have a climate in Cornwall, just weather – it could just as easily have been midsummer or midwinter.

Jonathan Jones kicked off proceedings by explaining about tea growing in general and tea as grown on the Tregothnan estate in particular.  Plants were handed around to examine along with dry and used tea leaves.  He is passionate about promoting high quality loose leaf tea in this country – quite right too.  We had samplings of various brews to match the selected Demarquette chocolates.  Marc explained how the chocolate flavours were more powerfully released from the warmth the tea left on the tongue. We started with Afternoon Tea and some dark chocolate from Brazil.  He was right.

Just in case you don’t know, Demarquette – Fine Chocolates is one of the top chocolatiers in London.   All of the chocolates are hand made using some of the finest quality chocolate to be grown and produced.  Marc Demarquette is as passionate about chocolate as Jonathon is about tea if not more so.  Ethically sourced and harvested produce is very high on his agenda; he featured in the Panorama documentary Chocolate – the bitter truth.  He spoke a little about the history and the ethics of buying truly “fair traded” chocolate.  He spoke to us about the importance of provenance as well as of production.  Real chocolate is slow chocolate – it takes a lot of time to ferment, roast and conch. Time is money and if poor people are not to be exploited along the supply chain, we the consumers should expect to pay a fair price. As with all top quality products, less is more.  Talking of luxury products, he has created three exclusive chocolates for Tregothnan, Kea Plum, Earl Grey and Honey.  All ingredients, other than the cocoa, come from the estate.

As I’m sure you are already aware, good quality chocolate contains cocoa butter, an ingredient much prized by the beauty industry which makes it a rather expensive commodity. The temptation for chocolate manufactures is to substitute this for vegetable oil and indeed this is what is used in most mass produced confectionery.  Samples of both deodorised (as used for skin products) and pure cocoa butter (as should be used by chocolate makers) were passed around for us to touch and sniff – we could certainly smell the difference.

Marc also demonstrated how to make a “simple” (his words not mine) ganache.  This was the part I was most excited about, given my propensity for splitting ganache and making a total mess. He made a Tregothnan Earl Grey Tea ganache using the tea, cream and honey from the estate.  He made it look very easy, but the secret appeared to be in using a whisk to slowly fold the ingredients together.  We all then had the unenviable task of eating up the ganache whilst it was still warm. Awful, but someone had to do it.  Again the flavours exploded on the tongue, the secret being in the warmth of the chocolate, although I suspect that the ingredients had something to do with it too. I will be attempting his method sometime soon and if works I will tell you how to make a successful ganache!

At various points during the afternoon, we tried two more from the Ganache Collection, Fleur de Sel and Blanc Manger des Antilles.  This collection has the names of the chocolates printed on the chocolate itself, an ingenious method of being able to select just what you want from the box. Both were delicious indeed.  The salty sweet caramel really set off the slightly sour dark chocolate and the Antilles had one flavour chasing another across the tongue (nutmeg, cinnamon, coconut and rum) – wonderful stuff.  As well as another dark chocolate whose identity now escapes me, we also got to try the recently launched Vietnamese Ben Tre bars, both dark and milk.  In addition to being ethically sourced, £1 from every bar bought is donated to Action Against Hunger.  The 70% dark was robust whilst the 40% milk was creamy and tasted of honey and both have won awards.  Among some of the teas we tried were the Breakfast Tea, which not being a black tea fan, was way too strong for me and manuka tea.  This comes from the Leptospermum scoparium bush, also known as tea tree in New Zealand, where it seems to cover virtually every hillside.  It has a delicious warm aromatic quality and grows extremely well in Cornwall.

Unfortunately, I was not feeling so great and thus missed most of the photo opportunities that were presented – I could kick myself now.  Apart from forgetting to take some of the actual chocolates that we ate, I didn’t take any pictures of the venue.  Smugglers itself was a really picturesque thatched cottage.  We had a guided tour later and inside, it was cosy  and snug and was a good setting for a romantic meal. I was rather sorry we weren’t staying for the three course chocolate dinner that followed our event.  Eisenhower’s chair presided by the fireplace; he apparently stayed one night at the cottage when planning for the D-Day landings.  The location itself was stunning. remote – a mile down a wooded track with the Fal estuary lapping almost on its doorstep; indeed a visit by boat would probably be the best option. Fortunately, they have some pictures on their website, so you can see what it looks like there.

Both Marc and Jonathan waxed lyrical about their chosen subjects and I just wished I’d come better prepared with pen and paper so I could record every nugget of information.  It was a very friendly, relaxed and good humoured occasion with questions from the audience being answered throughout the session. Even CT, initially a reluctant participant, cheered up remarkably quickly when presented with tea and chocolate. Despite feeling under the weather this was a wonderful way to celebrate Chocolate Week, very different to what I did last year, but no less fun.