A sumptuous three layer chocolate cake, filled with chocolate buttercream and topped off with a rich chocolate drip glaze. It’s a real crowd pleaser and perfect for any special occasion. Who doesn’t adore chocolate layer cake? 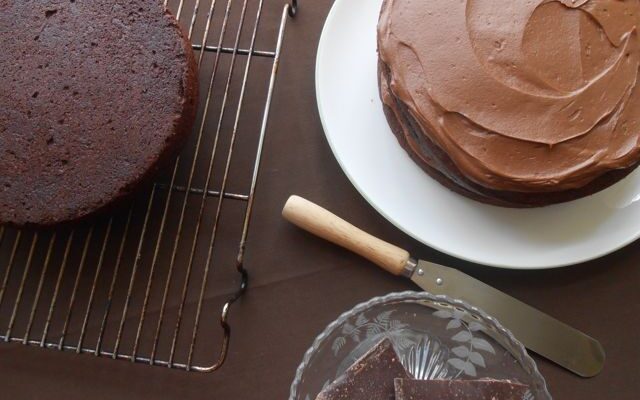 When I was asked to bake a cake for a rather sad occasion last week, I thought I’d try out one of Will Torrent’s recipes from his book Chocolate at Home. Or two of them as it turned out. I adapted his Nans’ chocolate fudge cake recipe to make it into a three layered cake. But then topped it with a chocolate glaze from his recipe for salted caramel &amp; rum top hat cake.

I used my usual mix of half wholemeal and half white flour, substituted coffee for the vanilla and milk and used dark muscovado sugar rather than light. I didn’t get to try the finished item, but with three layers of cake, three layers of buttercream icing and chocolate glaze, it looked to be a good one. Strangely, I did get to try the icing and glaze – *innocent face* – so I do know they passed muster.

Luckily, I did get some very positive feedback from some of the people who tried it. Apparently, it disappeared all too quickly.

Thanks for visiting Tin and Thyme. If you make this caramelised pear and honey carob cake, I’d love to hear about it in the comments below. Do share photos on social media too and use the hashtag #tinandthyme, so I can spot them.

If you’d like to see some more layer cake recipes, I have quite a few of them.

For the Buttercream Icing

For the Chocolate Glaze

For the Buttercream Icing

For the Chocolate Glaze

I am of course entering this into We Should Cocoa which is being hosted by Sarah over at Maison Cupcake this month. She’s on a bit of a layer cake mission at the moment, she’s made at least four this month.

With four large eggs in the mix, this chocolate layer cake has to go to Dom’s new challenge Simply Eggcellent over at Belleau Kitchen.

This also goes to Ness over at JibberJabberUK for Love Cake as this fits nicely into the theme of It’s in the Book. I adapted the chocolate fudge cake recipe from Chocolate at Home by Will Torrent.

And I haven’t entered Cook Blog Share for a while, so this is being sent in Lucy’s direction over at Super Golden Bakes.