Crisp delicious vegan Easter biscuits with a difference. These are a lot healthier than your average Easter bake, but still so good. They’re lightly spiced, low in sugar, purple and packed full of nutrients. Why would you say no? 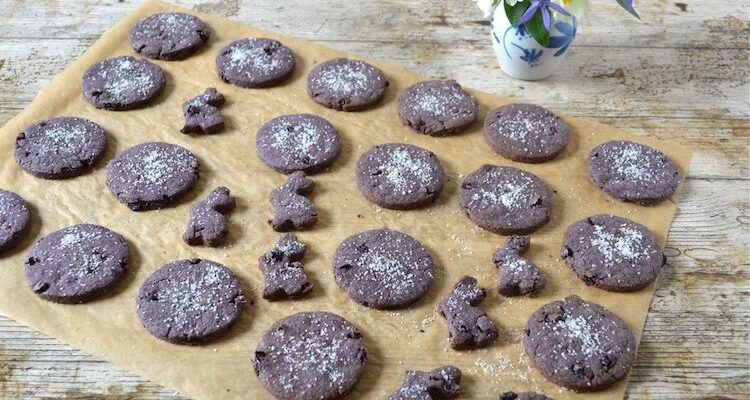 Easter just isn’t Easter somehow without Easter biscuits. I first starting making these traditional treats flavoured with mixed spice and currants when I was at school and I’ve been making them ever since. This year I thought I’d change things up a bit so I’ve gone for these healthier vegan Easter biscuits with purple corn flour and yacon powder instead.

When I saw organic yacon powder available at Indigo Herbs, I was intrigued. We grow yacon (Smallanthus sonchifolius) on our plot, but I’ve never come across it for sale in powder form before.

It’s an amazing plant. CT has a particular fascination with the lost crops of the Incas and this is one of them. It’s a tall and majestic perennial in the daisy family and comes from the Andes in South America. It produces large edible white or purple tubers that are sweet and crisp. They can be cooked or eaten raw and taste a little bit like an apple. An alternative name for it is in fact, Peruvian ground apple.

Yacon has various health benefits, but is particularly well regarded as a sweetener by diabetics; the human body doesn’t digest the sugars meaning it has pretty much zero calories. It also has prebiotic benefits, improving gut health and aiding digestion.

The powder is made from yacon juice and tastes slightly fruity and quite caramely. It’s not as sweet as sugar, but is sweet enough to replace it in many instances. For my vegan Easter biscuits, I used it to reduce the sugar quite considerably, but I didn’t omit it all together.

Indigo Herbs offers a huge range of interesting, healthy and high quality ingredients through their online store, most of which are organic. Their purple corn flour is also from Peru. Like any other corn flour, you can use it as a substitute or partial substitute for regular flour. It’s naturally gluten free.

I used half purple corn flour and half wholemeal spelt, so the gluten content of my vegan Easter biscuits is pretty low. Purple corn flour has higher antioxidant levels than blueberries. It’s said to boost the immune system and that regular consumption helps prevent diabetes and heart disease.

As a replacement for the traditional butter in these vegan Easter biscuits I used coconut oil and a little raw almond butter. Almond butter makes most things better I reckon. This one is organic as well as raw and it worked wonderfully in the goji berry bliss balls I made last month. I didn’t have any mixed spice, so I used a little garam masala and a grating of nutmeg which did the trick.

So, if you’re looking for a delicious crispy lightly spiced snack that’s healthier than most and only contains 33 calories per biscuit, why not try my healthier vegan Easter biscuits with purple corn flour and yacon powder?

Thanks for visiting Tin and Thyme. If you make these healthier vegan Easter biscuits, I’d love to hear about it in the comments below. Do share photos on social media too and use the hashtag #tinandthyme, so I can spot them.

The dough is a little crumbly, but it rolls fine if you don't mind a few cracks. It has a lovely short texture when finished.Please note: calories and other nutritional information are per serving. They're approximate and will depend on exact ingredients used.

I’m sending these healthier vegan Easter biscuits off to Treat Petite with The Baking Explorer and Cakeyboi.

This is a sponsored post in collaboration with Indigo Herbs. I was not expected to write a positive review and all opinions are, as always, my own. Thanks to my readers for supporting the brands and organisations that help to keep Tin and Thyme blithe and blogging.