A super easy-to-make and delicious vegan dip, spread or salad ingredient. The addition of miso gives extra flavour and depth to this Japanese inspired aduki bean dip. No aduki beans? Just swap them for what you have. 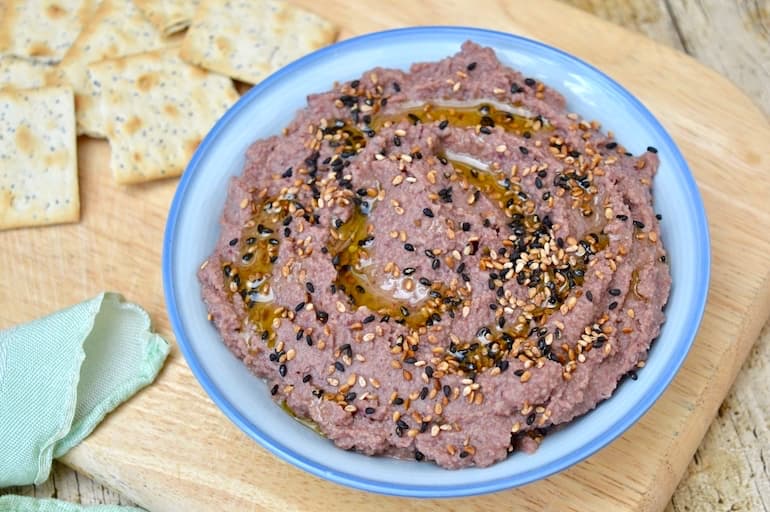 This, my first post of the year, has to be not only delicious and nutritious, but also vegan. I take part in Veganuary every year. In case you haven’t heard of Veganuary, it involves taking on a vegan diet for the whole month of January.

For me, however, it’s more than just going vegan for the month. I try to eat more healthily and with less processed foods. Principally it’s the sugar I try and cut down on. By the end of the month I’ve generally lost half a stone or more and I feel a lot healthier. Whether it’s because I’ve cut out the sugar or the dairy, I’ve no idea. But for me, the two go hand in hand.

The first time I took the challenge, it was precisely that, a challenge. But it gets easier every year and now I actively look forward to it. I always like to try something I haven’t before, whether that be a recipe, a new foodstuff, a new technique or all three.

Turns out, I can’t claim that this aduki bean dip is one of these. I created this in the middle of a sizzling summer one year. But nevertheless, it feels like a good recipe to start off the new year.

This is one of those fabulous recipes that as long as you have a blender or food processor, it’s super easy to make. Luckily, aduki bean dip is both delicious and nutritious too.

Place all of the ingredients bar the sesame seeds and oil in a food processor or blender. Whizz until everything has blended into a smooth (ish) paste.

I usually use a small food processor* for this as it’s quick to do and easy to wash up. For larger amounts, I’d use my ab fab Froothie Evolve power blender* though.

If serving as a dip, scrape the mixture into a bowl. Drizzle with a little olive oil and scatter with sesame seeds. Otherwise use straight away or store in a sealed container in the fridge for up to a week.

Use as a sandwich spread, a dip for crackers and crudités or add to salads, as I have in this sausage salad.

The first time I made this aduki bean miso dip, it was especially for this sausage salad recipe. I’d planned on making a white bean miso dip, but found when I looked in the cupboard that I only had a tin of aduki beans.

Aduki beans are small red beans with both nutty and sweet notes. They’re one of my favourite pulses. I often use them in stews such as this vegan bean chilli, where they work particularly well.

They’re widely used in Japanese cuisine, where they’re known as adzuki. But they use them mostly for sweet dishes rather than savoury ones. Although I was inspired by Japanese flavours whilst creating this aduki bean dip, it’s in no way an authentic Japanese recipe.

How Much do the Beans in a Tin Weigh?

I’ve used a 400g tin of aduki beans for this recipe. Once you drain the water (aquafaba) out of the tin, they weigh roughly 250g. The exact amount depends on the bean and the brand.

If you’ve got the time or can do a bit of planning, it’s much more economical to cook dried beans up instead. I usually cook a bag of dried beans in my slow cooker and then bag them up in tin sized portions. If you want to use dried beans instead, you’ll need about 125g or ¾ cup for this miso aduki bean dip recipe.

When I thought about it, I was quite pleased that I was forced to substitute the white beans for adukis. Aduki beans are commonly used in Japan, so I reckoned it would better complement the miso and tamari I was planning on using. Game on.

Miso is a Japanese fermented bean or grain paste. It’s fabulous stuff and I use it a lot to give depth and umami flavour to all sorts of dishes, but particularly soup. You’ll find there are four main varieties, white, yellow, red and brown and not surprisingly they’re quite different. You can, however, use any of them in this aduki bean dip recipe.

Tamari is a Japanese form of soy sauce. Unlike most soy sauces, it doesn’t contain wheat and is thus gluten-free. It’s also particularly rich and flavoursome. A little goes a long way.

To add to the Japanese themed ingredients, I sometimes use a good cold pressed sesame oil rather than extra virgin olive oil. Although it’s absolutely fine to use the latter if that’s all you have.

Its also really nice to drizzle some toasted sesame seed oil over the dip rather than the plainer sesame oil. This gives a lovely nutty edge to finish the dip and accentuates the flavour of sesame seeds.

I also went with a mix of both black and white sesame seeds to scatter over the top of the dip. If you toast them in a dry frying pan first, it really brings out their nutty flavour.

Sesame seeds, but particularly black ones are widely used in Japanese cuisine.

If you have access to yuzu juice, you could swap that for the lemon juice to increase the Japanese flavour profile even further.

Yuzu is a particularly fragrant citrus that’s grown in Japan as well as other nearby Asian countries. It tastes something like a combination of limes and lemons. It’s also very sour.

I don’t know about you, but I don’t really like the taste of aquafaba in cooking. Specifically the tinned variety where beans have been sitting in the water for I don’t know how long. Weirdly it’s fine in some things, like these aquafaba meringues, but I think it often gives food a “muddy” flavour.

So, unless I specifically want to keep the bean water, I drain the beans and give them a quick rinse with fresh water. Just pour them into a sieve and pass them briefly under the tap.

Can You Use Other Beans?

Yes, of course. You can use whatever beans you like or happen to have in your cupboard. Aduki beans are Japanese, so they pair up brilliantly with miso. But black beans work really well too. If you go for white beans instead of red or black ones, it’s best to use white or yellow miso rather than red or brown. This will give a different flavour profile, but the colour of your bean dip won’t end up a sludgy brown.

Thanks for visiting Tin and Thyme. If you make this aduki bean dip or a variation of it, I’d love to hear about it in the comments below. And do please rate the recipe. Have you any top tips? Do share photos on social media too and use the hashtag #tinandthyme, so I can spot them.

No aduki beans? Swap them for whatever you have to hand. If using white beans, use white miso instead of red or brown.To increase the Japanese flavour profile further, you could swap the lemon for yuzu, if you can get hold of it.If you have toasted sesame oil, drizzle a little over the top of the dip instead of the plain sesame oil.Please note: calories and other nutritional information are per serving. They’re approximate and will depend on serving size and exact ingredients used.

I’m sharing this recipe for a healthy vegan carrot cake with Lavender and Lovage for #CookBlogShare.