Autumn pears, fragrant honey and warming ginger come together for an easy bonfire night bake. These gingered pear almond honey cakes are not only delicious, but are easily portable. They’re  the perfect antidote to overhyped Halloween and its transatlantic excesses. They can be eaten whilst watching the bonfire flames dance and the Catherine wheels spin – no tricks, just treats. 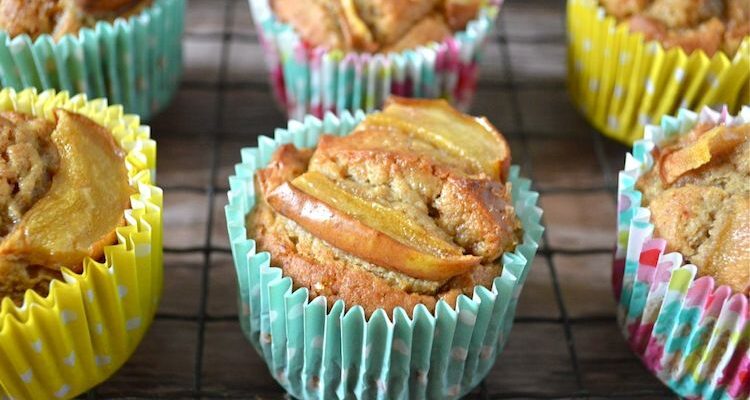 These almond honey cakes came about as a result of a failed attempt at making almond nut butter. I will be posting about this and its serendipitous love child later this month. Suffice it to say, the end result was totally worth it. I used some of my nut butter to make these cakes, but have given a slightly easier method here so you don’t have to make my version of nut butter first. I was putting my new Optimum G2.3 platinum series induction blender* through its paces, but my trusty Optimum 9200A* would have worked equally well.

The cakes, whilst not entirely sugar free, are made with a modest amount of honey and a small addition of crystallised ginger. As well as being low in sugar, they are low in fat too with only one tablespoon of coconut oil. The pears helped to sweeten the cakes, as well as giving them a nice texture. Almonds are always a good addition to a cake in my book. A little warming ginger combines beautifully with the other flavours and keeps the cockles of the heart glowing in the cold night air.

I’m sending these easy gingered pear almond honey cakes off to Jo’s Kitchen and Lavender and Lovage for this month’s Tea Time Treats. The theme is Halloween and Bonfire Night treats. These bonfire night cakes also go to Bake of the Week at Casa Costello

Thanks for visiting Tin and Thyme. If you make these easy gingered pear almond honey cakes, I’d love to hear about it in the comments below or via social media. Do share photos on your preferred social media site and use the hashtag #tinandthyme, so I can spot them. For more delicious and nutritious recipes, follow me on Twitter, Facebook, Instagram or Pinterest.

If you like this recipe for easy gingered pear almond honey cakes why not pin it for later?

Great cakes for eating around the fire on Bonfire Night.
Tried this recipe?Please take a photo and mention @choclette8 or tag #tinandthyme on Instagram, Twitter or Facebook.

Previous Post: « Cranking up the Ideas for Autumnal Slow Food and Giveaway #82
Next Post: Pear Almond Butter from a Nut Butter Fail »