Filling, cheesy and delicious, there’s nothing quite like cheese baps for lunch. If you like a good cheese sandwich, these wholemeal rolls are brilliant. The cheese is already inside the bread, so all you have to do is cut one in half, butter it and add a goodly sized portion of cress. or other salad greens. 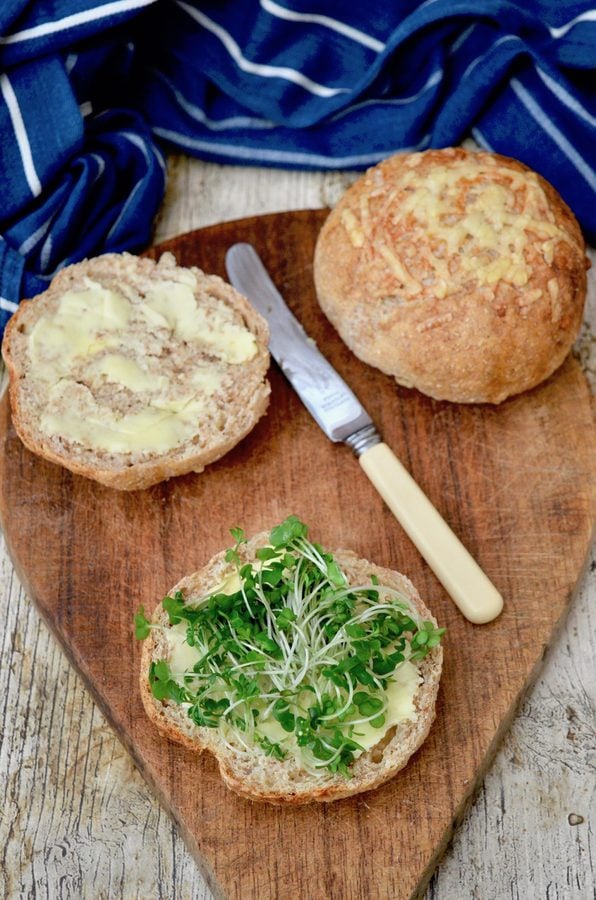 Mention the word Cranks to any of my old school mates and they will most likely heave a wistful sigh and start waxing lyrical about cheese baps, homity pie and date slices. It was the 70s and a new and trendy veggie café opened its doors in our very rural location and replaced the fusty dusty old fashioned teashop into which visiting parents would usher their offspring for a somewhat formal treat.

Out with the old, in with the new. Rustic furniture, brown pottery bowls, wild flowers on the tables and flares on the customers. Of course the rather more sophisticated London pupils were already familiar with Cranks, which first opened its doors in Carnaby Street back in 1961. I was not one of them. A trip to Plymouth was as sophisticated as it got. My friend Jenny remarked, when I asked her:

“hours were spent there with friends and it was so far removed from the usual fare to be found in cafes at the time.”

I wasn’t a bone fide vegetarian back then, but our school food was so awful, it pretty much put me off eating meat. I already ate a whole food diet at home so the more exciting fare on offer at Cranks played a significant part in my vegetarian journey. With limited pocket money, I could’t afford much, but cheese baps and other healthy snacks supplemented my rather poor school diet.

I may have left school, but that hasn’t stopped me visiting Cranks many many times. Now known as Cranks Kitchen, it’s moved along a little bit – quite literally. The Cider Press at Dartington has undergone quite a few changes in the years since I left school and although Cranks is in the same building, it now occupies a different spot.

It has new owners too, but continues to innovate and come up with fresh tasty treats while retaining its whole food ethos. The cooks prepare nutritious slow food from scratch each day. Old stagers like me needn’t worry however: many of the original dishes are still on offer.  Cheese baps may have given way to paninis now, but I’m glad to see homity pie still holds a place on the menu.

Cranks influenced our home life too. A Cranks cookery book was a firm favourite, although I no longer remember which one it was. I had a rifle through my mother’s cookbook collection when I was visiting last week, but sadly couldn’t find it.

Homity pie used to make a regular appearance on our table and it’s still one of my favourite pies ever. I’m also pretty sure it was a Cranks recipe I used to make my own wholemeal bread when a student in London. Yes I did, finally, make it to the metropolis.

You’ll find recipes for cheese and leek pudding, an aubergine dip and apricot buns here on Tin and Thyme. All adapted from one of the Cranks cookbooks.

I do have my very own copy of The Cranks Bible by Nadine Abensur and have used this a lot over the years. In fact I now have a copy of the recently published paperback version too. Why? I have my very own recipe for cashew nut butter brownies included in it – you can imagine how thrilled I was and still am.

Inspired by writing this post, I had a go at making my own cheese baps for the very first time. I can’t understand why I’ve never tried before. They did, after all, receive an Evening Standard award for the best sandwich in London. I was experimenting with a new cheddar cheese when I made these and they came out a brighter yellow than I’d expected.

That first time I cut down the amount of cheese that was in the original recipe. It seemed rather excessive. But I followed the rest of the recipe to the letter. Since then, I’ve made cheese baps a few times and have perfected the recipe as well as making it easier, clearer and more precise. I also only use proper white cheddar cheese, usually mature Cornish.

Cheese baps make a great sandwich for packed lunches. Once you’ve made them, very little effort is required. As long as you use ordinary wholemeal flour rather than strong bread flour, these baps don’t require much kneading.

Almost as soon as they’re baked, I excitedly split one, butter it and stuff it with mustard and cress, just like they were always served at Cranks. They’re always totally scrumptious and taste exactly as I remember them.

Do You Need A Mixer To Make Wholemeal Rolls?

You can make these cheese baps or any wholemeal rolls by hand or with a stand mixer. It’s entirely up to you. Because the flour is ordinary wholemeal rather than strong wholemeal, it doesn’t require much in the way of kneading. I’m lucky enough to have won a red kitchen aid a few years ago and it does a great job for this sort of bread.

Originally I used the method stated in the book. That is to say, on a board or work surface flatten the dough out roughly with your hands to form a rectangle. Cover two thirds of the dough with a third of the grated cheese. Fold the uncovered third into the middle, then fold over again to cover the remaining cheese. Seal the sides, turn the dough ninety degrees, then repeat the process.

To be honest, this is a bit of unnecessary faff. Now I just add the cheese to the dough whilst my mixer is kneading it. But if you’re kneading by hand you might want to follow the original method.

For conformation of their superior quality, when I asked Mimi for a Cranks memory back in the day, cheese baps were very much to the fore:

“My favourite, favourite thing were the cheese baps. So simple and delicious! The melted Cheddar on the top crust and the crispy cress inside made such a welcoming environment for a seriously whole grain bap, loaded with flavour and personality.”

When I asked Debbie for a memory, she not only reminded me of the legendary Cranks flapjack but also of our cheap food day at school. We used to eat basic food only, so the money saved could be given to charity. We all approved of the idea of course, but as she said:

“somehow the watered-down tomato soup and single slice of limp white bread wasn’t enough to silence the call of a Cranks Cheese Bap”.

Tiger’s Milk was a rather unusual drink I remember with great fondness, but I’ve not had since leaving school. For some reason, when I hitched to Spain and tasted horchata a few years later, I was convinced it was the very same Tiger’s milk.

However, when I acquired the Cranks Recipe Book by David Canter a couple of years ago, I was surprised to find I was entirely mistaken. Originally a Gaylord Hauser recipe, it’s a concoction of orange juice, milk, brewers yeast and molasses. I had to try it of course. I think I must have enjoyed it for the weirdness factor. Put it like this, it’s an interesting drink or as CT said “it takes some getting used to”.

Thanks for visiting Tin and Thyme. If you make these cheese baps, I’d love to hear about it in the comments below. And do please rate the recipe. Have you any top tips? Do share photos on social media too and use the hashtag #tinandthyme, so I can spot them.

Filling, cheesy and delicious, these baps are brilliant for lunches. The cheese is already inside the bread, so all you have to do is cut one in half, butter it and add a goodly sized portion of cress.
Prep Time20 mins
Cook Time20 mins
Resting Time45 mins
Total Time1 hr 25 mins
Course: Lunch
Cuisine: British
Keyword: bread, buns, cheese, vegetarian, wholemeal flour
Servings: 8 good sized baps
Calories: 363kcal
Author: Choclette @ Tin and Thyme

As long as you use ordinary wholemeal flour rather than strong bread flour, these baps don’t require much kneading.They keep well for several days and make a great packed lunch sandwich.Please note: calories and other nutritional information are per serving. They’re approximate and will depend on exact ingredients used. Butter and cress filling not included.

It’s National Vegetarian Week next week, 16th to 22nd May. Hosted by The Vegetarian Society, it’s a great time to dip your toe in vegetarian waters as there will be plenty of inspiration, tips and new recipes shared during the week. I’ve already got into the spirit of things and developed these Asparagoose Tarts specifically for the week of celebrations; if you fancy a picnic, these tarts, complete with seasonal asparagus and a hidden pesto layer, are for you.

Cranks have teamed up with The Vegetarian Society this year and are asking for your vegetarian stories and recipes. Just use the hashtag #NVW16 on social media or upload your story directly on the National Vegetarian Week website. This is my vegetarian story – or one of them anyway!

I am excited to be working with Cranks who are sponsoring National Vegetarian Week this year. They have commissioned this post. Opinions are, as always, my own. Thank you for your support of the brands and organisations that help to keep Tin and Thyme blithe and blogging.