A sort of cross between a rock cake and a thumbprint biscuit. These very British non-yeasted apricot buns are made with a mix of wholemeal spelt and freekah flours. They’re flavoured with vanilla and crowned with a spoonful of vanilla apricot jam.

Far from putting me off them forever, judging the Liskeard Bun has reignited my love for all things bun. Yeasted or not, plain or fancy, there is something rather wonderful about the British bun.

As I was looking through my copy of Cranks Recipe Book one night, as you do, I spotted a recipe for Raspberry Buns. They looked like a slightly softer version of rock cakes with a blob of jam in the middle – a sort of cakey thumbprint biscuit. I’d just made my second batch of vanilla apricot jam and was keen to start using it, so raspberry buns went out the window and apricot buns were born.

Of course I changed the recipe a bit. I used a mix of freekah and spelt flours instead of ordinary wholemeal and sultanas instead of currants. I also added some vanilla vinegar to the buns, which provided an additional vanillary note as well as helping the buns to rise.

The buns were a huge success and received favourable compliments from everyone that tried them. I might have to try raspberry buns next!

Whilst I’m on the subject of Cranks, have you seen my Cranks lunch hamper giveaway? There’s only a few days left to enter, so do hurry.

Thanks for visiting Tin and Thyme. If you make these vanilla apricot buns, I’d love to hear about it in the comments below or via social media. Do share photos on social media too and use the hashtag #tinandthyme, so I can spot them. For more delicious and nutritious recipes, follow me on Twitter, Facebook, Instagram or Pinterest. 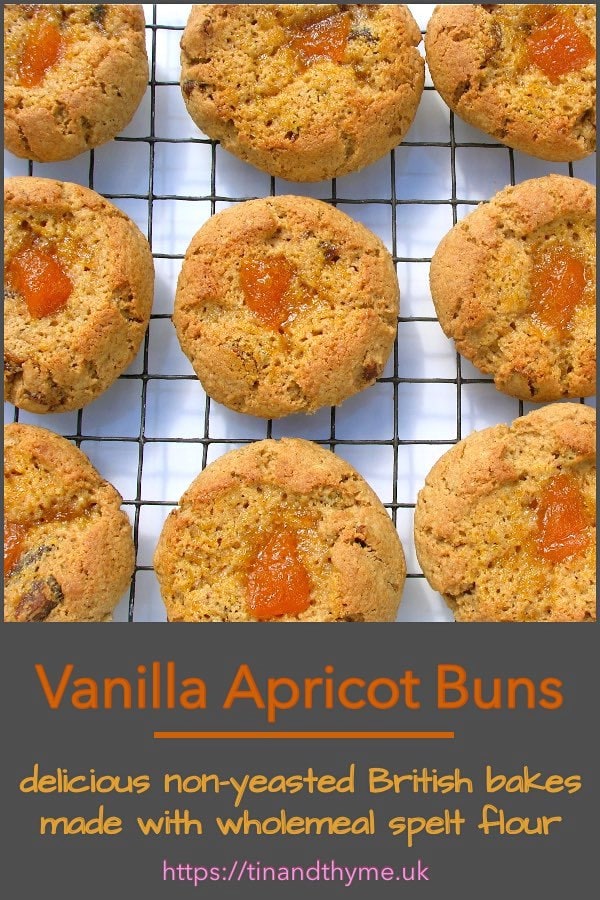 Buns can be made entirely with spelt flour or even plain wholemeal flour. Swap pure apricot jam for the vanilla apricot jam.

This may only have one duck egg in, but it’s a most important egg, especially as it might be the last for a while. When I went to our Friday market last week, I was told that the ducks were moulting and there would be no eggs for a while – very sad face! So I am sending these off to Simply Eggcellent as my contribution to  Dom’s birthday festivities.

J is for Jam and as the apricot jam is a key ingredient here I’m sending these off to Alpha Bakes over at The More Than Occasional Baker and Caroline Makes.

It’s back to basics with Love Cake this month over at Jibber Jabber UK. Well you can’t get more basic than a British bun, even if it does use fancy flours and fancy jam.