These brown butter cupcakes are a little unusual, but so very good. They’re made with toasty browned butter, white chocolate and jaggery which give delicious caramel overtones. The icing is also made with brown butter and jaggery, but it’s not your standard buttercream frosting. It’s smoother and less sugary. 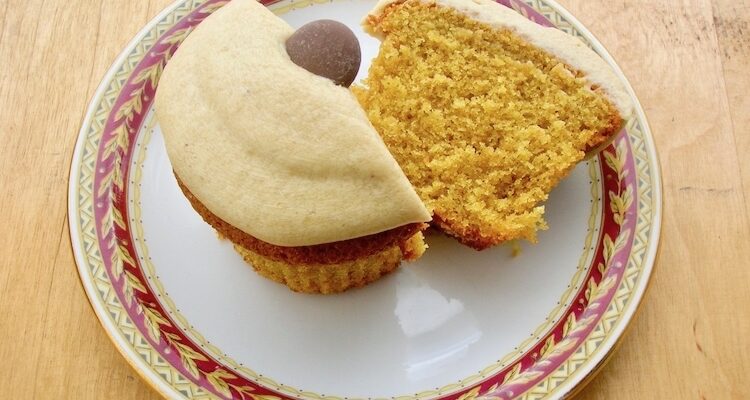 Once upon a time, many years ago, I made Nigella’s burnt butter cupcakes using jaggery instead of the prescribed sugar. They have lived on in my memory ever since as one of the most delicious cakes I’ve eaten. The reason I haven’t made them subsequently is because on the rare occasion I visit an asian shop, I forget to look out for jaggery.

Jaggery is one of the most natural and least harmful forms of sugar and is traditionally eaten on the Indian subcontinent. Natural cane juice is dehydrated and formed into blocks. It has a slightly fudgy texture and a unique caramel flavour. It is also high in minerals and has a much lower GI than refined sugar.

When I’m trying to reduce my sugar intake, I’ll often use rapadura. I find this easier to get hold of than jaggery, but it doesn’t have those same caramel notes.

Brown butter, also known as burnt butter or browned butter is a lot nicer than it sounds. It’s also very simple to make. You just need to melt unsalted butter in a pan, then let it simmer slowly until the solids drop to the bottom of the pan and start to brown. You can then use it as is, or filter out the browned bits of butter and use the clarified butter alone.

The French name for brown butter sums it up very nicely. Beurre noisette, means “nutty butter” and nutty is just how it tastes. It’s a key ingredient in traditional madeleines as well as various pastries and sauces. I really like brown butter and I’ve used it a number of times. Specifically in these recipes for basbousa and blackberry & apple pancakes with brown buttered cobnuts.

Random Recipes has reached the grand old age of 40 this month (months, not years), so Dom has ingeniously tasked us with finding our 40th recipe book and cooking whatever comes up on page 40. I can’t tell you how delighted I was when I got burnt butter cupcakes from Nigella’s How To Be A Domestic Goddess. Doubly delighted because I had recently come across some jaggery and bought it with the very intention of trying these cakes out once again.

Because I needed to get some chocolate into the bake and wanted to use jaggery, the recipe for the cake is almost completely different from the original. You can substitute the jaggery for regular brown sugar, but I highly recommend using jaggery if you can.

The recipe for the icing is quite different. I was intrigued recently when I saw a recipe for old fashioned flour frosting over at Delightful Repast. This is a basic sweetened white sauce which is then whipped up with butter and uses a lot less sugar than buttercream. This was my chance to try it out using brown butter of course.

I ended up adding some extra milk as I thought the mixture was too thick. As it turned out, I’d added a little too much so my icing didn’t hold its nicely piped shape. Or perhaps my impatience got the better of me as it firmed up later – I live and learn! I haven’t included the additional milk in the recipe.

Despite the disappointment of the shapeless icing, I was really pleased with its taste and mouthfeel. Smooth, creamy and quite delicious, it was not nearly as sweet as your average buttercream can be. I shall most certainly be trying this again. The cupcakes were nearly as good as I remembered them. But time, like absence, tends to make the memory fonder.

The brown butter worked a treat in both the cakes and the frosting. They were rich, caramelly and delectable.

For even more cupcake recipes, take a look at my cupcake category.

Thanks for visiting Tin and Thyme. If you make these brown butter cupcakes, I’d love to hear about it in the comments below. And do please rate it. Have you any top tips? Do share photos on social media too and use the hashtag #tinandthyme, so I can spot them.

If you’d like more brown butter recipes, follow the link and you’ll find I have quite a lot of them. All delicious, of course.

You can substitute the jaggery with regular brown sugar, but I highly recommend using jaggery if you can.Double the quantity to make 12 cupcakes.Please note: calories and other nutritional information are per serving. They’re approximate and will depend on exact ingredients used.

Previous Post: « Twinings: A Masterclass in Tea Tasting & a Recipe
Next Post: Whisky and Walnut Cakes for Father’s Day »