Once the season veers towards autumn, ginger cake becomes most appealing. These ginger and chocolate cupcakes are a lighter version of gingerbread with a lemony tang and fragrant aroma. You’ll find them a sweet and spicy bite with the added depth of chocolate. 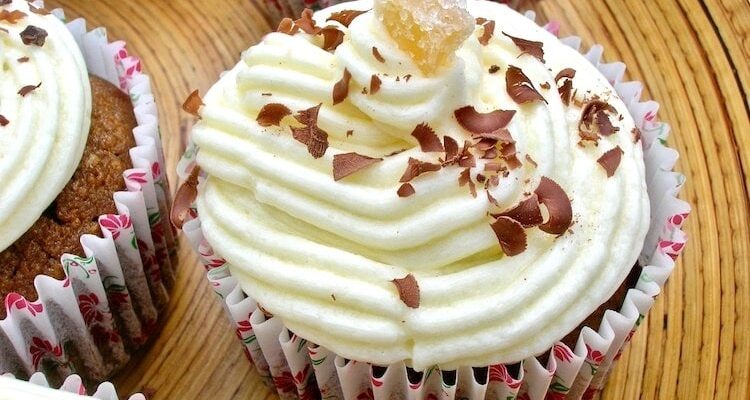 I don’t know why, but I really fancied baking something with my marrow and ginger jam yesterday. Well jam is probably pushing it as it’s more like sauce.

It was a friend’s birthday and as it’s National Cupcake Week, I thought I’d better bake some for her. I adapted a primrose bakery recipe for ginger cupcakes, altering the quantities, using ginger and marrow jam instead of stem ginger and adding bits of chocolate. I also thought this would be a good opportunity to, err, have another go at piping – deep breath, gritted teeth …

Well, my piping skills obviously need some improvement, but I was reasonably pleased with these ginger chocolate cupcakes. I didn’t break the bag or shoot the nozzle out of the end for a start. That’s got to be progress.

I tried total coverage as well as just a whirl in the middle to see which I liked best. Both CT and I felt that full coverage gave the best effect.

These ginger chocolate cupcakes have a delicious gingerbread taste, but with a lighter texture and the ginger isn’t too strong. Combined with the lemony tang from the ginger and marrow jam, the fragrant aroma and chocolate nuggets, they’re real winners and I shall be making them again for sure.

Just as well I was giving this batch away or I might have polished off quite a few of them. That was my friend’s avowed intention anyway.

If you don’t have a cupboard full of marrow and ginger jam like I do, don’t panic. You can use a jar of stem ginger along with some of its syrup instead. Add a little grated lemon zest and you’re done. Lemon marmalade could work as an alternative too.

Thanks for visiting Tin and Thyme. If you make these ginger chocolate cupcakes, I’d love to hear about it in the comments below. And do please rate the recipe. Have you any top tips? Do share photos on social media too and use the hashtag #tinandthyme, so I can spot them.

To make a cheat’s version of sour milk, stir a tsp of lemon juice into the milk and leave for a few minutes to thicken.Please note: calories and other nutritional information are per serving. They’re approximate and will depend on exact ingredients used.