A recipe round up of 24 thrifty homemade chocolate cakes that have all been made for £1 or less. 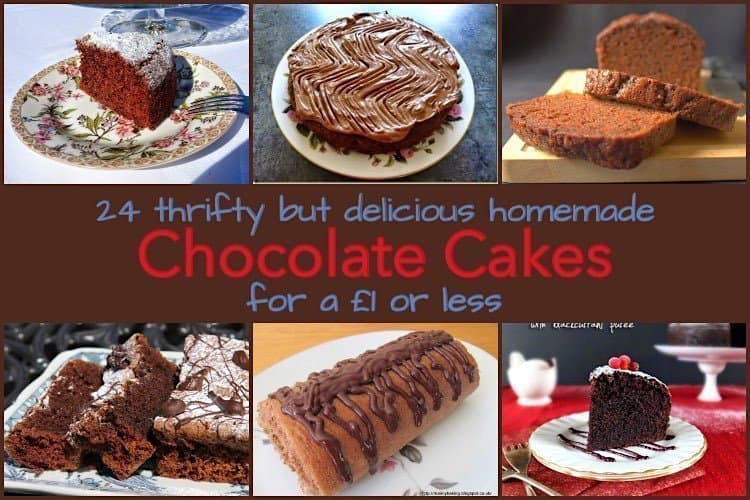 Gosh, I have so enjoyed this month’s challenge, even though it was a particularly tough one. Who would have thought you could make a delicious chocolate cake for £1 or under? I wasn’t at all sure it was possible.

Well, as you will see from the following 24 thrifty homemade chocolate cakes in this month’s We Should Cocoa, not only is it possible, but there is more than one way to make a frugal but delicious chocolate cake.

I was inspired by the Live Below the Line campaign to set this month’s challenge. It was to try and make a chocolate cake for under £1. Of course, if you are starving or really counting the pennies, chocolate cake is likely to be a luxury that can only be imagined. Attempting this made me ponder on just how lucky I am to be able to eat well without worrying about cost or availability.

It was wonderful to see so many bloggers rise to the challenge, especially as a number of compromises had to be made. I was glad to see that few compromised on eggs. I feel passionately about this issue and can in no way condone the use of battery or barn eggs.

One of the things I found out from hosting this challenge is that you can get 100g bars of chocolate for as little as 30p. I had no idea! Thank you so much to everyone who took part this month, you’re a sterling bunch. We hope you feel inspired by these 24 thrifty homemade chocolate cakes.

Ceri from Natural Kitchen Adventures was straight in there on day two. She had already spent a week living on £1 a day so a whole £1 for a cake was rather a luxury. From her gluten free kitchen, she had the additional challenge of coping with expensive flour substitutes. In the end she came up with these dairy free, low sugar gluten free budget brownies which not only cost £1 exactly but sound delicious.

Chocolate Cake For Less Than £1

Michelle from Utterly Scrummy Food for Families also did the Live Below the Line challenge. Her chocolate cake for less than £1 came in at 98p. That is, if you exclude the optional chocolate topping which added an additional 30p.

I’d thought yogurt wouldn’t be an option as it can be quite expensive to buy, but it was used here together with coffee for extra flavour.

Laura from I’d Much Rather Bake Than … used this opportunity to bake a cake she’s wanted to try for a long time – a chocolate chilli loaf cake. Adapted from a GBBO recipe, she was delighted with both the flavour and velvety crumb especially as the ingredients cost 97p.

Rebecca over at BakeNQuilt had to convert £s to $s to figure out what she could spend on her cake. The result was her microwave chocolate crazy cake that came in at $1.33 or 78p on the day of conversion. I was interested to hear this plain vinegar and oil cake is also known as a Depression Cake, presumably originating from the Great Depression – a great recipe for tough times.

I was so excited by this challenge, I made two cakes, one with eggs and one without. I used drinking chocolate powder to shave off a few pennies for the non-vegan cake. This meant the chocolate flavour wasn’t strong, but it was definitely there.

As it turned out the eggless vegan cake made with my dandelion honey was my favourite, although the malted hot chocolate cake was surprisingly good too. I give you this sticky, flavoursome banana chocolate vegan honey cake.

Things got really wild over at Elizabeth’s Kitchen Diary and a drizzle of blackcurrant puree made for a very stylish finish to her cake. Made from a childhood recipe, this devil’s food cake came in at 98p. She was surprised to find that the vanilla extract was the most expensive ingredient used in the cake.

Dashing Dom from Belleau Kitchen had three goes at this challenge with the first two ending up in the bin with the description “vile” attached to them. As so many did on this challenge, he raised the thorny issue of eggs. Not prepared to compromise on this issue his olive oil chocolate cake didn’t quite hit the £1 mark, but came in at a respectable £1.19.

Another additional challenge for Kate from The Gluten Free Alchemist – the price of flour. She was quite shocked to find out her 25g of gluten free flour translated into a whole 220g of wheat flour. Despite this she came up with a very attractive and tasty chocolate-ginger loaf cake that came in at 97p.

Making cakes look attractive is of course really important and having seen what many of you have managed, I feel rather ashamed of my plain old cakes.

Kate from What Kate Baked has made her banana and chocolate cake look absolutely stunning and totally worth the few extra pence that takes it over the £1. This one even contains chocolate chunks, how decadent is that?

The challenge captured the imagination of fellow chocoholic Zoe over at Culinary Adventures of The Cocoa Nut who I’m very pleased to welcome to We Should Cocoa. Her salted chocolate peanut butter n jelly torte is perhaps more of a dessert than a cake, but it sounds fabulous and at only 98p is definitely worth considering next time a pudding is required.

It’s pretty shocking, but I have occasionally heard that it’s cheaper to buy a cake than it is to make it yourself. Jean from Baking in Franglais has completely put paid to this one by doing a comparison. Not only was her homemade economical £1 chocolate cake nicer than the supermarket £1 cake, but it was much bigger, both in size and in wieght. She managed to ice hers too and it has made it look rather special.

Sarah over at Tales From the Kitchen Shed came up with a very elegant offering enriched with coffee and yogurt and all for just under £1. Her chocolate fudge cake is covered in chocolate icing and even more impressively chocolate curls. She has a rather ingenious method of making these and it’s definitely worth checking out her post to find out how she does it.

As many of us did, Corina of Searching for Spice decided to omit expensive eggs from her cake and was surprised at just how good it was. Her eggless chocolate cake came in at 90p so, as she said, it could easily have been cut in half and sandwiched with a layer of cheap jam for extra interest. The addition of golden syrup was a nice touch which must have added an extra bit of flavour.

Next comes a stylish offering from Suelle of Mainly Baking. She had three attempts at this challenge, but was happiest with this chocolate Swiss roll filled with orange curd and drizzled with chocolate. The ingredients for this cost 95p and produced six decent sized slices. Her other two bakes were these brownies and a chocolate orange cake.

Ros from The More Than Occasional Baker is well known for her love of peanut butter, so I wasn’t altogether surprised when she came up with this chocolate banana and peanut butter cake. There was a secret ingredient here which enabled Ros to make the cake for exactly £1, a packet of supermarket sponge mix. The cake got the thumbs up from her work colleagues and she herself was surprised at how light and moist it was.

Ness of Jibber Jabber UK decided to have a clear out of her cupboards for the making of her chocolate malt cake. So it was that dates made their way into this eggless fatless cake which, along with golden syrup gave some moistness to what she thought might otherwise have been a rather dry offering. It cost 95p.

Janet of The Taste Space gives us something a little more unusual. Her chocolate chickpea flour cupcakes are not only vegan but grain free too. She’s decorated them with a chocolate tofu frosting, but I expect that would be well outside the £1 boundary.

Although Janet didn’t work out the costings, she reckoned it would be about two Canadian dollars which is about £1. With the high cost of chickpea flour, cocoa powder and vanilla extract, I’m not so sure, but it would be interesting to find out.

Having icing on your £1 cake is obviously not the impossibility I thought it was. Hannah over at A Corner Cottage Bakery made a very cheap cake so was able to top it with a rather luxurious chocolate water ganache. The recipe for her chocolate cake with ganache was based on the Good Housekeeping’s economical chocolate cake and cost just over 92p in total.

Katherine over at Leeks & Lemoni is another that has been surprised at how good a cake made with oil and no eggs can be. She even went as far as to say her chocolate syrup cake was better than the regular chocolate cake she makes. This worked out at 1p over the £1 mark, but I think we’ll forgive her as it looks so pretty 😉

I’ve loved the variety of cakes that have been produced for this challenge and Rachel Cotterill gives us yet another permutation with her vegan mocha loaf. Tempted as she was to do a bit of foraging to liven things up, she reckoned that as many didn’t have access to foraged fruit, it was cheating.

Looking at how good these slices are, I’m not really sure she needed it. The loaf came in at exactly £1.

Another iced cake comes in from Jill of Lapin d’Or and More. She also used a water ganache on her Mrs Beaton’s Cocoa Cake, but found it to be a bit thin and watery and wouldn’t recommend it if using cheap chocolate. She’s lucky enough to have her own hens and ducks, but costed the eggs up as if using supermarket budget ones. Even so, she came in at 2p over the £1 mark. If nothing else, this challenge has shown us all just how difficult it is to make tasty and nutritious food on a tight budget.

Vegan chocolate cakes are a speciality of Shaheen’s over at Allotment 2 Kitchen. CT and I can vouch for this having tried them last year. I still remember how light and delicious they were. Do read about our visit to Shaheen’s Hunky Dory Vegetarian Cafe if you’d like to know more.

For this challenge, she’s made a fiery vegan chocolate ginger cake and it sounds delicious.

So Many Thrifty Homemade Chocolate Cakes

We hope you enjoyed these 24 thrifty homemade chocolate cakes. We certainly enjoyed eating them. Please do take a look at the We Should Cocoa page. It’s quite possible that there you will find all the chocolate recipes you’ll ever need.