If you like the flavour of coconut, these little bites of deliciousness are for you. They’re coconut cake pops flavoured with a little fiery ginger and then coated in a sumptuous chocolate ganache. Who needs lolly pops when you can have sophisticated cake pops? Perfect for parties. 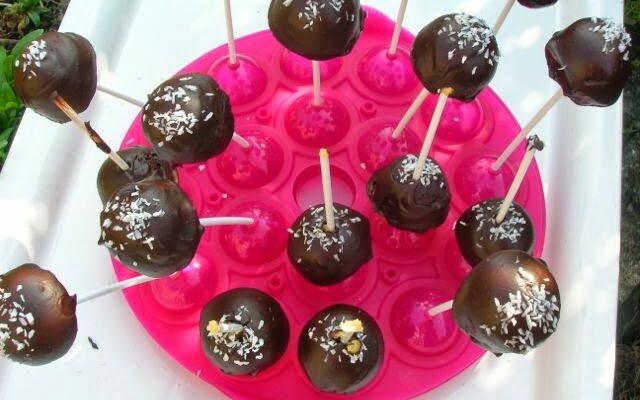 This month’s We Should Cocoa is all about coconut. As soon as Laura let on what the ingredient was going to be, I was mulling over some sort of bake using coconut oil, flour and sugar to make a really coconutty treat. I had something in mind, when I remembered seeing a coconut and ginger recipe in the booklet accompanying the Lékué cake pop kit I was sent to try out. As I was rather sceptical about cake pops and couldn’t really see the point of them, I hadn’t yet got around to doing anything with it. The time, it seemed, had come.

The kit consists of a round pink 18 hole cake pop tray made from platinum silicone and a decomax which is also made from platinum silicone. A recipe booklet is also included along with 20 plastic sticks. The cake pop tray has a base with a lid shaped to encourage the cakes to form perfect balls. The lid also doubles as a cake pop holder which can be used whilst the icing or chocolate coverings set.

I didn’t actually use the decomax for this bake, but have used it to decorate my bundt cakes and mini chocolate cakes. As someone who hasn’t managed to get to grips with piping bags, I’m completely won over by it. Having said that, it comes with only 6 nozzles three round and three star shapes of different sizes. It would be good to have a bit more choice. It’s easy to fill, easy to use and is simple to wash. I could have used it to fill the cake pop holes, but it seemed simpler, in this case, to use a teaspoon for the task.

Like the rest of the Lékué products I’ve tried out, the silicone is sturdy and of good quality. I really like the bread maker and the waffle moulds, but I couldn’t do without my fabulous silicone bundt mould. The only issue I had with the cake pop kit were the plastic sticks. Because they were just too feeble for the job and bent under the weight of the pops. The kit retails at around £30.

So I adapted Lékué’s recipe, which sounded rather a good one. I used coconut oil rather than olive oil, substituted caster sugar with coconut sugar and used a mix of coconut flour and gluten free flour rather than wheat flour. These were going to be the only adaptations I made, but unfortunately, I started following the measurements from an adjacent recipe instead, so my quantities also ended up being different. Hey ho, never mind.

Myriad disasters were the order of the day when I made these coconut cake pops. Let’s see: wrong ingredients, cakes sliding down the stick, ganache being rather thick to work with and chocolate spreading itself over me and the kitchen. But despite them, I was immensely pleased with my first ever cake pops. They tasted delicious and I finally saw the point of them.

Eating little bits of cake covered in chocolate is a very different experience from tucking into a slice of cake with chocolate on the top. The higher ratio of chocolate to cake turn it into an intense and indulgent occasion. I used 65% Inaya pur noir chocolate from Cacao Barry which adds wonderfully complex notes to the ganache. I’ll also concede that the cake pops looked rather good too. I might add that these had a number of tasters and they all concurred with my assessment as they dug into their second cake pop. CT even managed a third.

And here’s a few other chocolate and coconut recipes I’ve made.

Thanks for visiting Tin and Thyme. If you make these gingery coconut cake pops, I’d love to hear about it in the comments below. Do share photos on social media too and use the hashtag #tinandthyme, so I can spot them.

This is my entry to We Should Cocoa which is guest hosted this month by Laura of I’d Much Rather Bake Than …. Coconut is her ingredient of choice and with three types of coconut used, these cake pops are nothing if not coconutty.

I didn’t manage to link up with The Spice Trail last month which was a shame as I was keen to try caraway in something other than my bread. However I have managed it this month as the chosen spice is ginger. Ginger is one of my favourite spices and we get through a lot of it in this household. This event is hosted by Vanesther of Bangers & Mash.

This month’s Love Cake theme is giving up. Well I’m not a great fan of giving up, but this was fairly specific. We have to bake a cake or cakes without at least one standard ingredients. In other words, wheat flour, butter, sugar or eggs. I’ve actually baked these coconut cake pops without three of the ingredients. So I feel I can be a little bit proud. This is hosted by Ness over at JibberJabberUK.

The theme for this month’s Tea Time Treats is decorative cakes. Whilst my pictures may not show the more successful cake pops off to their best advantage, they really did look rather cute and definitely decorative.

Made from scratch as they are with lots of good for you ingredients, I’m sending these coconut cake pops off to Javelin Warrior for his Made with Love Mondays.

With their jaunty tops bobbing away on sticks and the yellow centres, I reckon these could pass off as Spring like, so I am entering them into Calendar Cakes hosted by Dolly Bakes where the theme this month is Spring Into Action.

Thanks to Lékué for sending me the cake pop kit to try out and to Cacao Barry for the chocolate. I was not required to write positive reviews and as always all opinions are my own. Thank you for your support of the brands and organisation that help to keep Tin and Thyme blithe and blogging.