I love marzipan, so I get very excited when I start to see Simnel cake posts appearing on the blogosphere around Mother’s Day. It’s Easter now and I haven’t made a simnel cake for a couple of years, so it just seems the right thing to do. Last year I made these Amaretto cupcakes decorated with crystalised primroses which were delicious, but just not quite the same as a proper Easter simnel cake. I do like my traditions.

For me Eastertide food conjures up nostalgic memories of boiled eggs for breakfast, hot cross buns, Easter biscuits, Easter eggs of course but most of all Simnel cake. I love simnel cake, the fruit cake is nice enough, but it’s the way that middle layer of marzipan oozes into the cake as it cooks that makes it so special. And then, there is all that lovely marzipan on top complete with eleven luscious balls.

Although simnel cakes were traditionally made for Mother’s Day or by serving girls who were allowed this mid-lenten feast day off, they have become more recently associated with Easter. The eleven marzipan balls on the top of the cake are meant to represent eleven of the twelve apostles. The twelfth is Judas Iscariot who, being a traitor, is not deemed worthy of remembering!

I wanted to make something rather different to the chocolate simnel cake I made last time, which although good, was not quite good enough. I managed to burn the marzipan under the grill and I used shop bought marzipan rather than making my own. This time I based my recipe on the one from the Great British Bake Off: How to Bake by Linda Collister.

I decided to substitute some milk chocolate chips and my homemade candied citrus peel for the glace cherries in the recipe – mostly because I didn’t have any cherries, but I did also want to use these two ingredients. The chocolate bits seem to enhance the flavour and combine particularly well with the marzipan.

For the marzipan I thought I’d try Pam Corbin’s recipe from Cake. The last marzipan I made for the battenberg, using a recipe from Bake & Decorate by Fiona Cairns was a bit difficult to work with.

It’s not strictly necessary to soak the dried fruit before mixing up the cake. But it does give it a more delicious dimension and it makes the cake moister too. I soaked the fruit for this cake in Amaretto and lemon juice. But you could use the alcohol or fruit juice of your choice. Orange juice works well. It’s best to soak it overnight if possible. You can, however, leave it in a warm place, such as the airing cupboard and the fruit will soak up the liquid in a much shorter time.

Homemade marzipan is so much nicer than any marzipan I’ve bought. It’s not as sweet and has more almonds in it. It’s made with raw egg, but because there’s so much sugar in it, it will keep for a few weeks without going off. You’ll need to make the marzipan for this simnel cake when you make the cake as you need to bake a layer into the middle. But that’s fine as the rest will keep happily in the fridge until you’re ready to decorate the cake. Once decorated, it will keep at room temperature for a week or so.

You can, of course, substitute shop bought marzipan for homemade. You will need 500g.

The cake looks best (in theory) if it’s bronzed a little. But take care when grilling. Like King Alfred, I have, unfortunately been known to burn my cake. In fact, I’m inclined to just leave the grill well alone next time as the marzipan top looked better before it went in than after. Alternatively, you could use a cook’s blow torch if you have one. 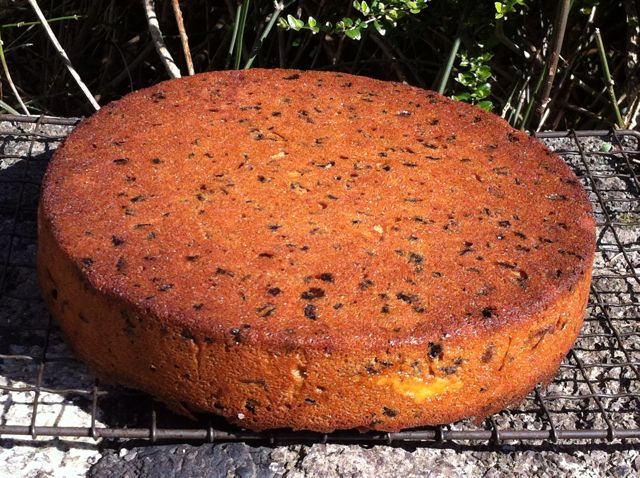 Appearance aside, I have to say that marzipan is absolutely delicious. Indeed, I had a very hard time stopping myself eating too much of it. But despite the urge to munch I did have 100g left over from the amount I made, so I will resist temptation and keep it for something else.

Easter this year proved to be a rather hectic affair, but also rather an enjoyable one. Not really having been able to do much down at our plot in recent months, we had plenty of catching up to do. Plus we had old friends visiting over the four days who we were also looking forward to catching up with. So, we spent the mornings down at our plot, digging, tidying, mowing, having a bonfire and planting the potatoes and the afternoons with our friends, walking, talking and visiting lovely places – oh, and did I say eating?
For Easter tea on Sunday, we went to my mother’s. She had made her usual simnel cake and decorated it most beautifully, so I really wanted to show her efforts here. My mother always uses Mrs Beaton’s recipe, so it’s almost the very cake I grew up with, which is just as it should be. 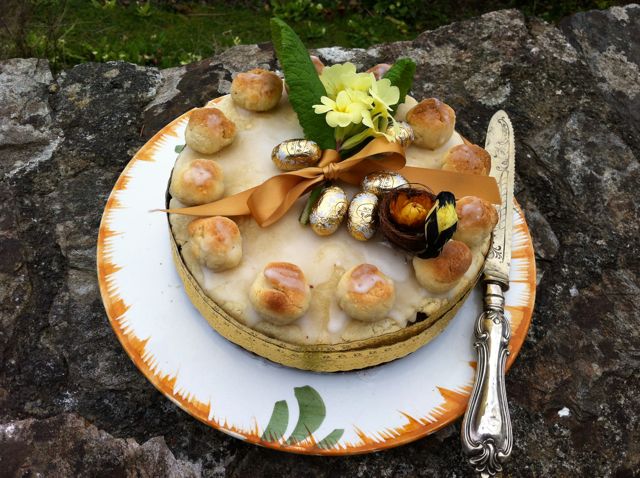 The Simnel Cake I made went with us to friends for tea on Easter Monday. I wish I’d taken pictures of their lovely spread which included some delicious chocolate brownies topped with clotted cream and raspberries. After eating egg on home made bread, home made scones with home made jam and clotted cream and a brownie, we were all too full to really appreciate my cake. Having said that, the cake was deliciously moist and made a good impression on all that partook of it. Still quite a bit of it came back home with us and is, in fact, still keeping us going.

If none of these recipes do it for you, I have a few more ideas in my Easter Recipes category.

Thanks for visiting Tin and Thyme. If you make this simnel cake with or without the homemade marzipan, I’d love to hear about it in the comments below. Do share photos on social media too and use the hashtag #tinandthyme, so I can spot them. 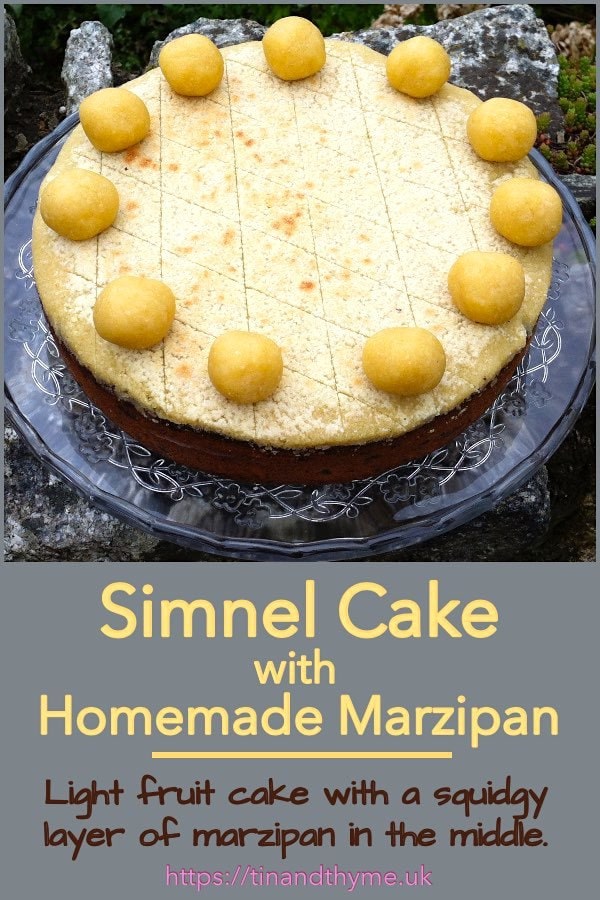 Simnel Cake with Home Made Marzipan – The Recipe