Fresh and zesty orange flapjacks studded with dark chocolate chips. These chocolate orange flapjacks are not only tasty, but they’re quick and easy to make too. Just what you need when you’re in a hurry. As well as a filling snack, they also make a great dessert. Just serve warm with custard. 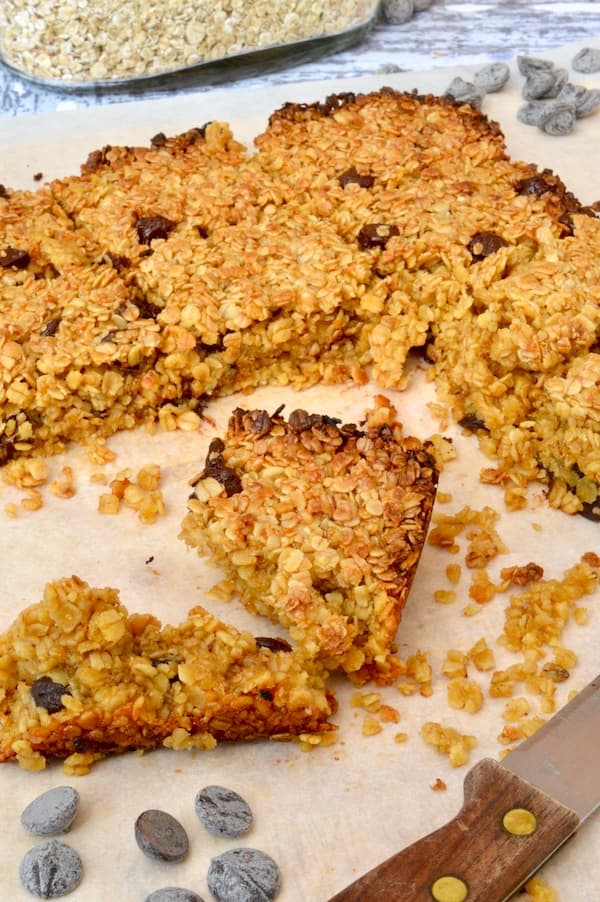 Just after Christmas, one year, friends were having an “open house”. You know me, I didn’t feel I could just turn up empty handed, but I also didn’t have a great deal of time to bake anything elaborate. I also felt with all the goodies going around at Christmas, something simple would be welcome. Flapjacks, I reckoned, would fit both of these criteria.

Chocolate and orange are a good festive combination and so it was that these chocolate orange flapjacks were born. I’ve made them many times since.

Chocolate and orange is such a popular combination and for good reason. It’s one of those unions that just brings out the best in each. Rich intense chocolate contrasts well with the fresh zesty notes of orange. In these flapjacks, the main flavour is fresh orange but the intense burst of chocolate when you hit a piece is a real delight.

Flapjacks are one of the easiest bakes ever. In fact they’re one of the best to start children off with in the kitchen. You don’t need much more than weighing scales, a big saucepan, a wooden spoon and a square baking pan.

Admittedly these chocolate orange flapjacks are slightly more complicated in that you need to zest and juice the orange. But they still only take a few minutes to prepare. Basically, you need to melt the butter and syrup together in the saucepan. Add sugar, a pinch of salt and the orange juice and zest. Give it a good stir so it’s well combined, then stir in rolled oats followed by the chocolate chips.

Press the mixture into a buttered baking pan and bake. There’s a minimum of fuss and not much washing up either. Win win!

You can make the flapjack mixture in advance. Just press it into the baking pan and leave it in a cool place until you have time to bake it, either later the same day or the next. It doesn’t need to go in the fridge. Just cover it to stop it drying out.

Flapjacks don’t normally have wet ingredients added to them, other than melted butter and syrup. As these ones include orange juice, it makes the flapjacks a little more fragile. So, unless you’re going to serve them warm in a bowl for dessert, make sure you leave them to get thoroughly cold before you cut them.

You can use orange flavoured chocolate in this recipe and omit the orange. Whilst the flapjacks are less crumbly if you do this, they don’t have that zingy freshness that makes these chocolate orange flapjacks sing.

For flapjacks with a more solid structure, melt the chocolate along with the butter and syrup rather than adding it as choc chips.

As already mentioned, these flapjacks also make a great dessert, especially if you serve them warm with custard or even cream.

How to Measure Golden Syrup

Golden syrup is really sticky stuff, so it can be awkward to measure. The easiest way to do it is to place your metal measuring spoon into a mug of very hot water. Quickly dry the spoon with a clean tea towel and dip it into the golden syrup tin. Whilst the spoon is warm, the syrup will slide off the spoon really easily. Quickly dip it in a second time, if needed, before the spoon has a chance to cool off.

This method works just as well for treacle or molasses as it does for golden syrup.

If you’re nearing the bottom of the tin, place it on top of a mug of hot water for a minute or so. This will make the syrup runnier and it will then be much easier to extract it from the tin.

One tablespoon of golden syrup is approximately equivalent to 25 grams or 1 ounce. It’s not an exact conversion, but will work for most recipes.

Thanks for visiting Tin and Thyme. If you make these easy chocolate orange flapjacks, I’d love to hear about it in the comments below. And do please rate the recipe. Have you any top tips? Do share photos on social media too and use the hashtag #tinandthyme, so I can spot them.

If you’d like more flapjack recipes, follow the link and you’ll find I have quite a lot of them. All delicious, of course.

Because of the orange juice, these flapjacks are a little on the crumbly side. Make sure you leave them until they’re completely cold before you try cutting them.
Please note: calories and other nutritional information are per serving. They’re approximate and will depend on serving size and exact ingredients used.