It’s giveaways galore here on Tin and Thyme. Some recent wins and why bloggers host them. 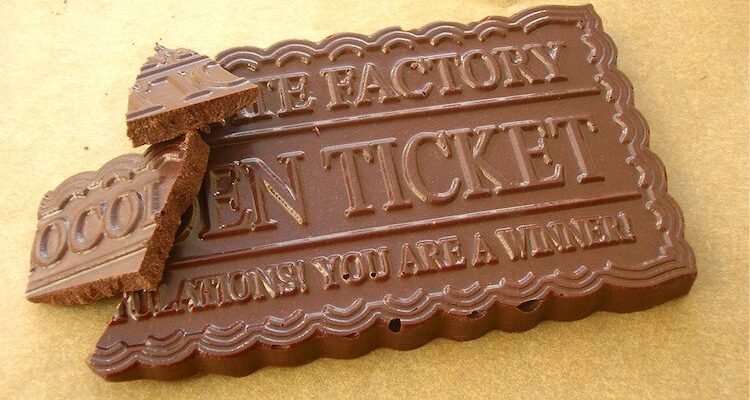 I was really excited to receive this amazing chocolate mould, which came all the way from Australia – from Celia of Fig & Lime Cordial. Celia makes all sorts of interesting and delicious looking chocolates as well as baking many tempting chocolate cakes. As you can imagine, I’m a frequent visitor.

Receiving this has really made me want to crack the art of tempering and I’ve resolved I will do it by one means or another this year! Despite my lack of tempered chocolate, I’ve managed to use the mould once so far when I made raw chocolate recently. I’ve subsequently made some real chocolate from scratch with it too. You can see the result in the top photo.

Only two of us went in for this one and Janice of Farmersgirl Kitchen, finding it difficult to let one of us down very kindly gave us both a copy. I was really pleased with this as it not only has three seasonal recipes to make each month, but also includes details of various Landshare projects.

I decided to use it as this year’s luck journal. Before going to bed, to help keep my spirits up, especially on work days, I try and write 4-6 things down that have gone well during the day. I’d let this practice lapse for rather longer than I’d realised – since May last year, so it’s definitely time to resurrect it. On the worst of days, it really helps to look back and remind oneself of all the good things that have happened.

I also decided I should set myself a mini challenge and try to make at least one of the monthly recipes during said month. In reality I only have a choice of two recipes as one of the three is usually a meat or fish one, but it’s another good way of expanding my repertoire. In January, I made Kale rarebit and jolly delicious it was too. That one will now be making regular appearances on our table during the kale season. For the following months, I’m planning on making:

I’ve never owned or even used a slow cooker before. So I was really excited to find I’d won this 6 litre Morphy Richards model from Helen of Fuss Free Flavours. It’s a bit of a double edged sword, because although we thought it would be really useful, which it is, we don’t have a great deal of space in the kitchen and it is quite large. The base stores away inside the pot, but the lid is more awkward to stash.

Luckily, with a bit of reshuffling, I’ve managed to fit it in to one of my cupboards. We used it to make a squash curry with one of our gigantic squashes. The curry tasted extra good for being slow cooked and as there was so much of it, we didn’t have to cook all that week when we got home from work – wonderful.

I’ve subsequently found it’s particularly useful to cook dried pulses. It’s so much cheaper and nicer to cook your own rather than use tinned. Another slow food cooker recipe I’ve got on the blog is this end of season vegetable stew with mushroom dumplings. That was pretty good too.

I confess to having undergone an evolution in my thinking about giveaways, awards and the like. I started off blogging as a real purist. My aim was to get a great collection of chocolate recipes and try making new things. But as I’ve got to interact with other bloggers more and more, I’m loosening up all the time and now think these are a fun way of passing a bit of pleasure around.  I really like getting gifts and receiving parcels in the post, so why should I expect others to be any different?

So on that note, I now have a page listing all the giveaways I’ve hosted or am hosting.

What do you think about giveaways galore? And awards come to that?

Thanks for visiting Tin and Thyme. Have you ever hosted or won anything in a giveaway? I’d love to hear your thoughts on giveaways galore in the comments below. Do share photos on your preferred social media site and use the hashtag #tinandthyme, so I can spot them.