Squidgy chocolate brownies sandwich a layer of apple and ricotta cheesecake. Delightfully decadent and delicious. Enjoy these apple cheesecake brownies with a fork as an after dinner dessert. Or just tuck into one with a cup of tea or coffee. 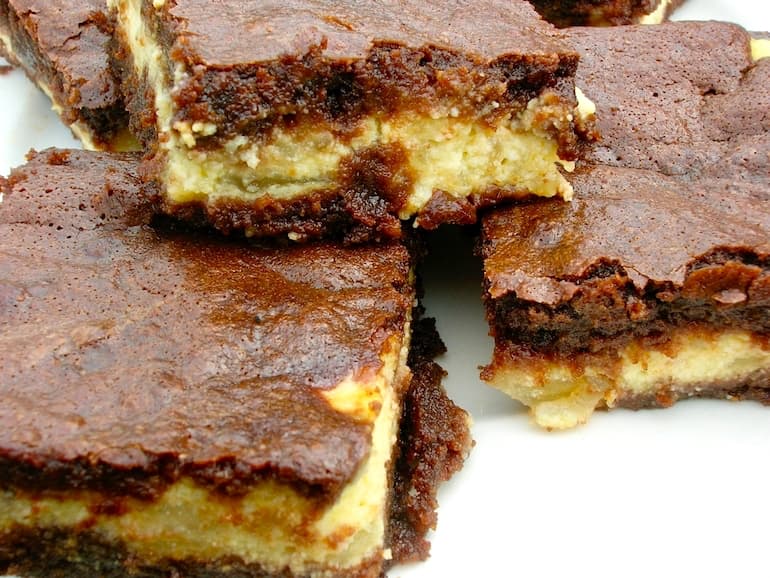 It’s National Chocolate Week and I fancied some brownies. I had a tub of ricotta to use up and some Cornish apples from my mother’s garden. So to celebrate this most auspicious week, I decided to experiment and make some apple ricotta cheesecake brownies.

These apple cheesecake brownies are slightly more involved than my normal super quick brownie creations. The actual brownie is quick and easy to prepare and is made in one pan. But you also need to cook the apples and beat them together with the other cheesecake ingredients. This forms the middle layer of the brownies.

Once you’ve made the two mixtures, it’s just a simple process of layering them up in a baking pan. Place them in the oven and bake.

Initially I wanted the brownies to have a marbled effect. However, when I dragged the end of a teaspoon through the mixture to try and swirl it a bit, it stubbornly decided to stay a sandwich. As it turns out, this worked really well. The cheese is sandwiched elegantly in the middle and acts as a foil to the dark richness of the brownie.

The chocolate gods must have been smiling on me because these apple cheesecake brownies turned out to be a fitting tribute to National Chocolate Week. They have a crusty sugar top, which turns deliciously chewy in a toffeish sort of way. They’re soft in the middle and serve equally well as a pudding eaten with a spoon.

They retain their shape, however so you can eat them perfectly well with your fingers. As CT can testify; I did have to shoo him away from the tin.

The 85% dark chocolate combines with the slight tartness of the apple, which  helps to counteract that brownie sweetness. It makes for a very pleasant eating experience.

Thanks for visiting Tin and Thyme. If you make these squidgy brownies, I’d love to hear about it in the comments below. And do please rate the recipe. Have you any top tips? Do share photos on social media too and use the hashtag #tinandthyme, so I can spot them.

If you’d like more apple recipes, follow the link and you’ll find I have quite a lot of them. All delicious, of course.

As these brownies contain local and very seasonal apples, I am entering them into Simple and in Season, guest hosted this month by Nazima of Franglais Kitchen.

I’m also entering the apple cheesecake brownies into Javelin Warrior’s Made with Love Mondays as they’re made from scratch. Of course.