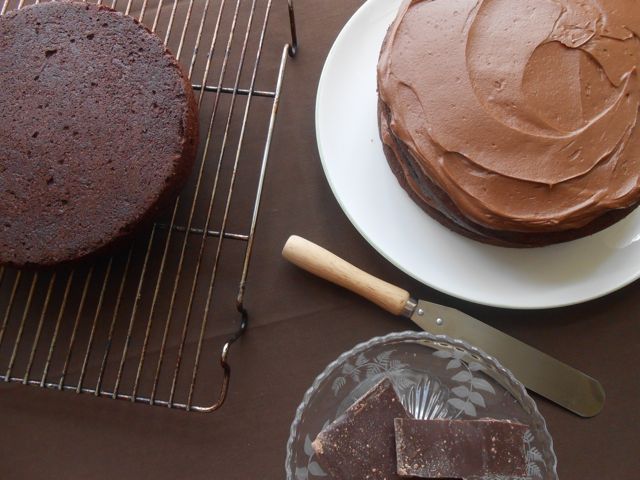 Celebratory Layer Cakes, We Should Cocoa | 22nd March 2015 | By Choclette

A sumptuous three layer chocolate cake, filled with chocolate buttercream and topped off with a rich chocolate drip glaze. It’s a real crowd pleaser and perfect for any special occasion. Who doesn’t adore chocolate layer cake?

END_OF_DOCUMENT_TOKEN_TO_BE_REPLACED

This is another recipe adapted from my vintage Christmas stocking present which I made back in January – yes I do have a few unposted recipes that have been hanging around in my drafts folder for far too long. I know Bonfire Night has now passed, but this seems a very suitable cake for this time of year, bonfire or no bonfire.

END_OF_DOCUMENT_TOKEN_TO_BE_REPLACED

Chocolate Blackberry Cake – We Should Cocoa #49

Celebratory Layer Cakes, We Should Cocoa | 10th September 2014 | By Choclette

As this is a We Should Cocoa anniversary, I wanted to do something a little bit special. I also had a cake to make for a friend. I knew I wanted to use the chocolate blackberry jam I made a couple of weeks ago; it’s not only rather special but seasonal too. Leafing through some of my baking books, I came across Ruth Clemens’ Ultimate Chocolate Cake recipe in her book, The Pink Whisk guide to Cake Making. The recipe looked good and as we are all in the throws of the Great British Bake Off, it seemed rather appropriate as Ruth was one of the finalists back in 2010.

I decided to follow the recipe for the cake batter and the ganache, but not the buttercream as I was going to use jam. I halved the ganache recipe and changed the cake recipe a little – I just can’t help it! I attempted feathering for the first time using the leftover blackberry white chocolate ganache from the blackberry puddings recipe I have yet to post. 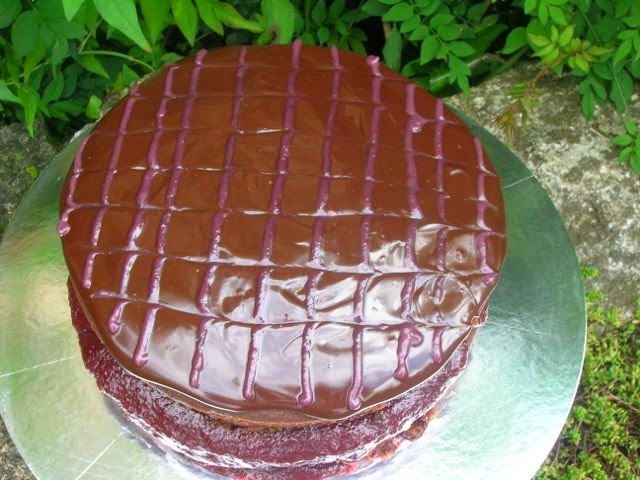 The batter rose so well, that it annoyingly overflowed, which was not quite what I was looking for. The mixture was also a little fragile, so needed to be handled quite carefully when still warm. It was, however, very light and quite delicious. CT, who wasn’t party to the intricacies of the creation, was quite taken by the unexpected pleasure of the blackberry jam cunningly secreted in the middle – ooh he said. 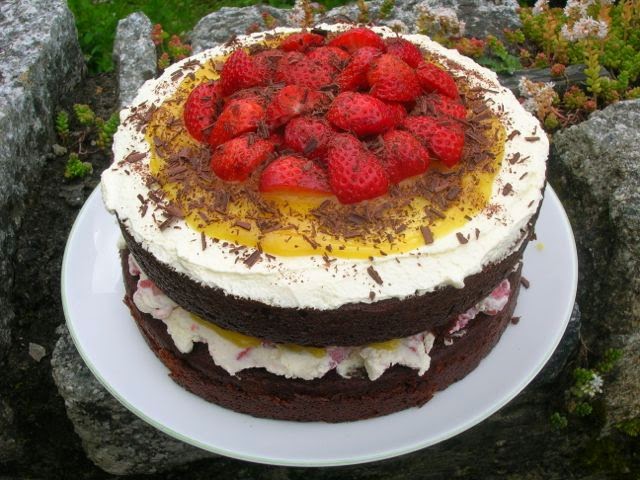 A celebration chocolate pomegranate cake. It’s made with pomegranate juice then layered and topped with cream, lemon curd, strawberries and chocolate.

END_OF_DOCUMENT_TOKEN_TO_BE_REPLACED

There’s nothing quite like the scent of ripe strawberries in summer. This Eton mess chocolate cake makes the most of this delectable bright red summer fruit. Two layers of chocolate cake are sandwiched and topped with lots of strawberries, cream and meringue. It’s perfect for birthday parties, celebrations or any alfresco occasion which requires cake.

END_OF_DOCUMENT_TOKEN_TO_BE_REPLACED 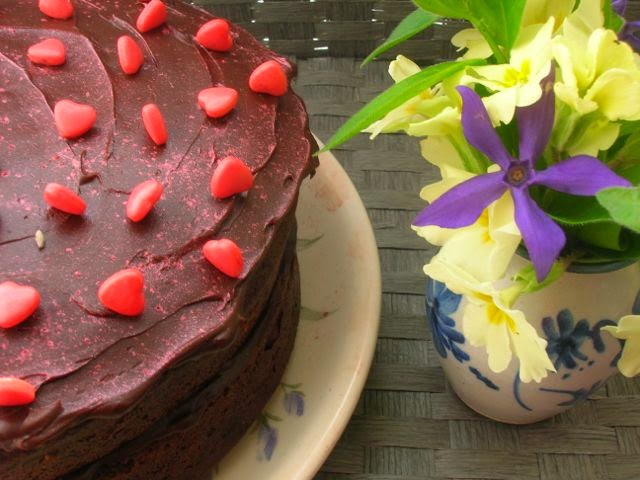 This dark rich lavender chocolate goose egg cake is made with a single egg. You can, of course substitute the goose egg with chicken eggs, but it’s well worth trying to get hold of one if you can. The cake is filled and covered with an unctuous chocolate ganache which is also flavoured with lavender. Ideal as a Mother’s Day cake and probably best enjoyed by adults.

END_OF_DOCUMENT_TOKEN_TO_BE_REPLACED 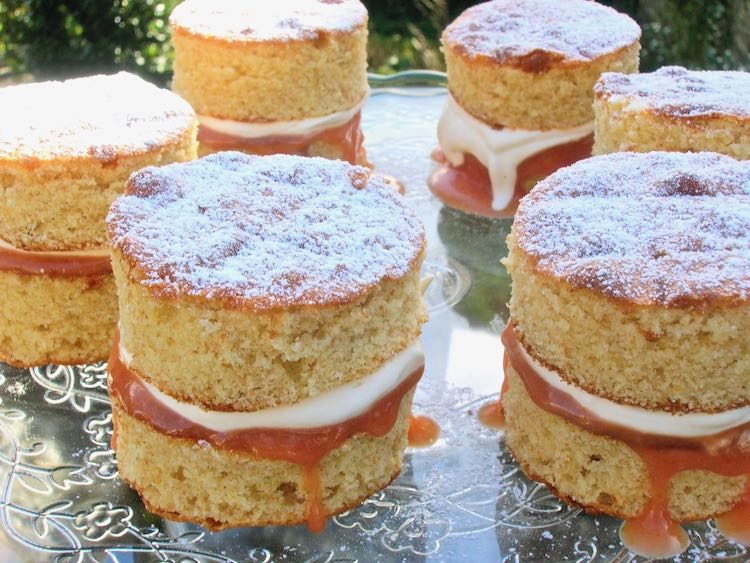 END_OF_DOCUMENT_TOKEN_TO_BE_REPLACED

My mother asked me back in November (oh dear where does the time go?) if I would make a cake for her. She volunteers at her village community centre and wanted the cake as a leaving and thank you present for her boss. I knew it was time to make Ruth Clemens’ (aka The Pink Whisk) Tiramisu Cake. This is not a natural choice for me as I am in a small minority of non-coffee lovers. However, I do know it is considered to be one of the most popular flavours ever and I have supporting evidence. When The KitchenMaid chose coffee as the We Should Cocoa special ingredient, we had a record number of entries and Lucy had to do the round-up in two parts. Tiramisu, everyone assures me, is a delicious dessert, so transformed into cake form, how could it fail to please? That was my reasoning anyway.

Ruth is one of those bakers whose recipes I trust. I’ve made a number of her bakes and not once has she let me down. However, as I am completely incapable of following a recipe, I did make a few adaptations. As it was meant to be tiramisu, I used cream cheese in the icing. I wanted to use the classic mascarpone, but when I went down to our local co-op, I found it had stopped selling it, which was mighty annoying. I had to make do with Philadelphia instead. I didn’t cover the cake with ganache either as I wanted the contrast between the chocolate and cream colours to stand out. I reduced the amount of icing sugar in the icing and also used slightly less sugar in the cake.

I wasn’t expecting it to turn out to be such a stonker of a cake, but petite it was certainly not. CT was rather upset to find his tasting services were not required; unlike me, he enjoys coffee flavoured cakes. Nevertheless, the feedback I received via my mother was very positive and was most gratifyingly demonstrated by an empty plate.

I’m also entering this into Emily’s Recipe of the Week over at A Mummy Too.