An almost classic Victoria sponge cake recipe, but sandwiched together with chocolate buttercream as well as the more traditional jam. Perfect for afternoon tea in the garden when the weather allows. 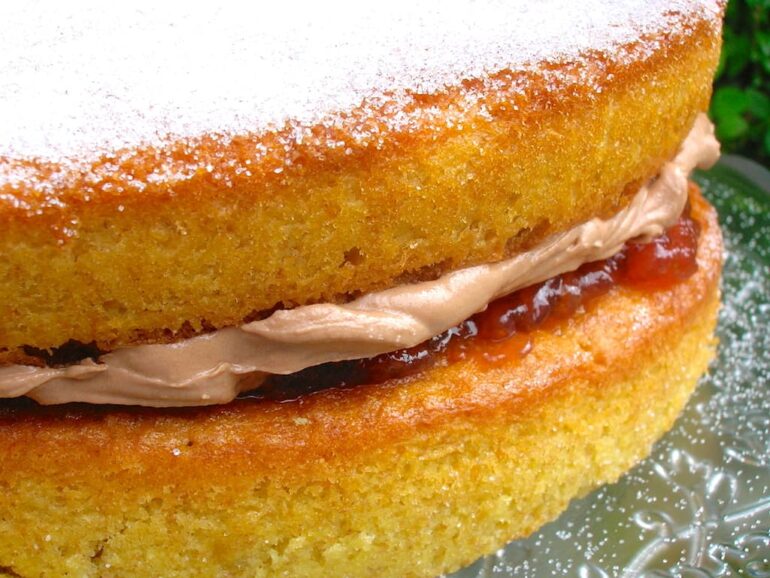 This month for Random Recipes Dom asked us to take no more than ten seconds to grab one book and run. He reckoned with no time to think, we’d automatically go for our most useful book.

My go to baking book is Nigella Lawson’s How to be a Domestic Goddess, which coincidentally is the book that featured in last month’s Random Recipes.  If I need a reminder on how to bake something or need a reliable recipe, then this is the first book I turn to. This doesn’t necessarily mean it’s the best or even the most comprehensive baking book I own, although I suspect it probably is. But I’ve had the book for many many years and it’s like an old familiar.

The next task was to randomly pick a recipe. When I asked CT to pick a number, he obligingly came up with page number fifteen, which is Nigella’s Victoria Sponge.

I’ve made Victoria sandwich cakes innumerable times, but I’ve never used Nigella’s recipe before. To be honest, you don’t really need a recipe for this classic sponge cake. Because all you need to do is weigh the eggs, then add equal quantitates of butter, flour and sugar.

She suggests substituting some of the flour for cornflour. I’m always interested in trying different methods and ingredients, so I was keen to see what, if any, difference this made.

I used duck eggs which always give a glorious rich yellow colour to sponge cakes. Sour milk works really well in bakes, so I used that rather than ordinary milk. It helps cakes to rise. I also went with a mix of wholemeal spelt flour and plain white flour.

On Nigella’s three page spread all about this classic sponge, chocolate was not even mentioned once – harrumph!

Luckily, with a sponge, this is really not a problem as you can generally fill it with whatever you like. I decided I’d fill mine with the fig and pomegranate jam I made last year and chocolate buttercream. Chocolate and figs are a good combination I reckon.

As I have a bottle of homemade chocolate extract in the cupboard, I added a little of that to the sponge mix to echo the chocolate notes in the buttercream.

The cakes rose beautifully in the oven and all looked good. But oh dear, this is where disaster struck. I normally leave the cakes to cool in the moulds for ten minutes before turning out, which is exactly what you should do. But in my eagerness I didn’t listen to the warning bells in my head.

Large chunks stuck to the bottom of the mould and my first cake was a mess. I dutifully left the second one in its mould for 15 minutes before turning out and it was absolutely fine.

I am eating a slice now and can attest that despite its rather crumpled look, the cake held together and tastes wonderful.

The jam and buttercream are a good combination, but I actually think jam with whipped cream is a better one. Less sweet and it would have allowed the jam to really shine.

I’m not sure I really noticed what difference the cornflour made to the texture of the sponge. But it wasn’t a double blind trial, so perhaps I need to make two at the same time to test it out.

Thanks for visiting Tin and Thyme. If you make this chocolate buttercream Victoria sponge, I’d love to hear about it in the comments below. And do please rate the recipe. Have you any top tips? Do share photos on social media too and use the hashtag #tinandthyme, so I can spot them.

If you’d like more layer cake recipes, follow the link and you’ll find I have quite a lot of them. All delicious and nutritious, of course.