For Mother’s Day this year, I decided to make some cake truffles. I had some left over lemon & poppy seed cake from the book swap event which, I thought, mixed with orange, would make some nice tangy St Clements Truffles. 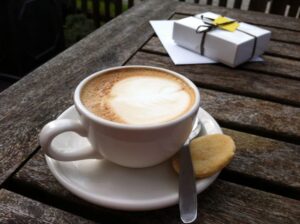 Oh my, these were delicious. It may not say much for the sophistication of my palate, but I’m becoming a real fan of cake truffles. They are a lot nicer than I would ever have believed and are set off so well when covered with a nice dark chocolate. I was a little concerned at how well the lemon flavour would go with chocolate, but I needn’t have been – sweet and sharp is a well known winning combination. The box found its way back to me empty, so I have to assume my mother quite liked them too. 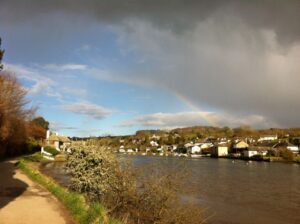 A walk along the lovely Lerryn river following an early lunch at Duchy Nursery were to be the treat of the day. My mother is particularly enamoured of the leaf that appears in the froth on the top of their coffees, as can be seen in the above picture (sort of). Although the weather was showery, we didn’t get rained on, which was most fortuitous as, due to an oversight on the restaurant’s part, we had to sit outside for lunch. Luckily, my mother is a hardy soul and she really enjoyed her day.
Previous Post: « Chocolate Polenta Cake – Rich Dark & Sophisticated
Next Post: Mascarpone & Apple Curd Tarts – We Should Cocoa 20 »