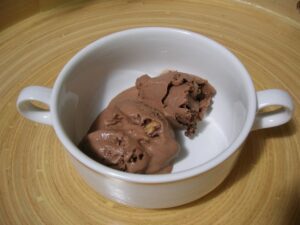 When Kavey announced that her Bloggers Scream for Ice Cream challenge this month was for chocolate, how could I not enter? Making ice-cream without an ice-cream maker is not my favourite activity, but after the success I’d had with my chilli chocolate ice-cream a few months ago, I was willing to give it another go. Decision made, I turned immediately to Ben Vear’s Make your own organic ice-cream to see what other chocolate delights he had waiting in store for me to try. Ah ha, a recipe for chocolate brownie ice-cream.

First thing to do was make some brownies then. I used this recipe for almond toffee brownies using 85% dark chocolate (G&B) and instead of using 3 eggs yolks, I used 1 duck egg yolk and 1 whole duck egg. Oh, a handful of chopped walnuts were also thrown in. I slightly overcooked the brownies, so they went crunchy rather than toffee like, but were certainly not cakey. This suited me fine as I thought the crunchy texture would go well with the smooth ice-cream.

This is how I made the ice-cream:

As I expected, the result was delicious and the crunch of the brownie made an interesting contrast to the creamy smoothness of the ice-cream. The permutations for this are endless, you could use any number of different brownie recipes to give varying flavours and textures as well as flavouring the actual ice-cream with chilli, orange, cinnamon or whatever else grabs your fancy. Next time – yes I really think there might be a next time – I’d like to try a fudgy type of brownie to see how it compares.
The day I served this up, it was really hot, so the ice-cream had virtually melted before I could take a photograph – that’s my excuse for rubbish photographs this time! I served this with some of Dom’s white chocolate sauce, although it really didn’t need it.

If ice-cream is your thing, I suggest you have a look at the Bloggers Scream for Ice Cream round-ups on Kavey’s blog Kavey Eats – you’ll see some fabulous creations.