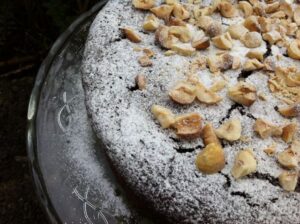 As part of the review process for Crazy Water Pickled Lemons I felt I needed to make one of the recipes. No surprise that I chose a chocolate cake – a hazelnut and sherry one.

The cake rose beautifully, I was expecting it to sink like a souffle, but luckily, it sank just enough to gave a pleasingly level top. This is one for the adults – rich, dark & slightly bitter it almost borders on the savoury. The crunchy pices of hazelnut provide an interesting contrast to the smooth crumb of the cake. As for the raison cream, it was delicious in its own right and we could have happily eaten a bowlful. It enhanced the flavour of the cake and bought out its fruity notes. This would be good as a dinner party dessert and despite its magnificence, it is very easy to make.