A review of the cookbook Stacie Bakes by Stacie Stewart. It’s an eclectic mix of recipes with vintage, classics and modern bakes both from Britain and abroad. They’re all given a Stacie twist. 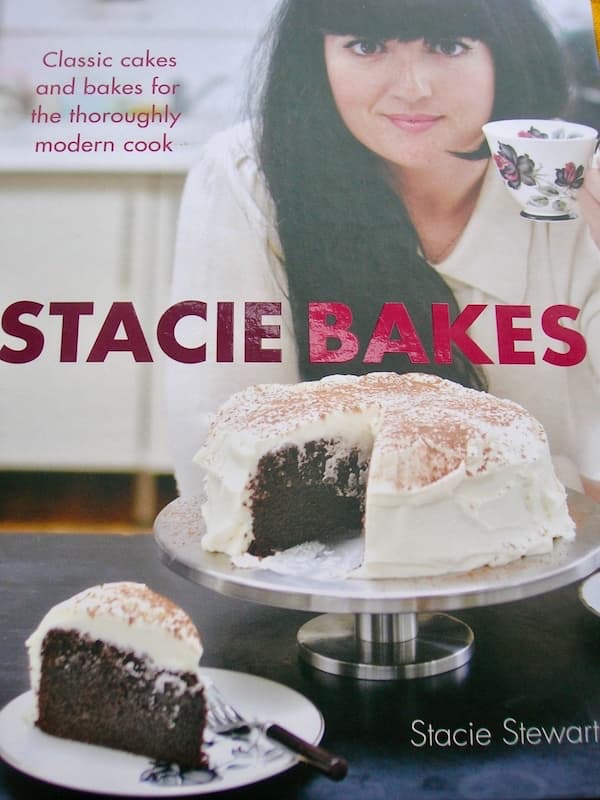 We don’t have a television, so I’d not heard of Stacie Stewart until I was sent her book to review. On finding out she reached the Masterchef finals in 2010 and is now on ITVs food. Glorious.food, I wasn’t much the wiser.

Well, along with this august claim to fame, she also has a bakery supplying cakes and bakes to shops and events around the country. Ahh, now I get it, she’s a baker. My interest has awakened.

Stacie bakes is a 208 page hardback book with a whopping hundred recipes. The chapters are arranged by the calendar. The first is, New Year, New Baking Rules and the last is Christmas Baking & Gifts.

I found some of the recipes placed a little arbitrarily: Turkish delight with pistachios sounds delightful, but I’m not sure I’d have put it in the chapter for Mother’s Day and Vintage Tea.

There’s an introductory section on baking tips and equipment. I think this is particularly useful for the novice cook and it’s rarely covered. Such essentials as: oven temperatures vary. I had no idea about this when I started baking and it’s caused no end of problems with both burnt and underdone bakes.

Toast nuts before you use them both for added flavour and for loosening skins. This is another of Stacy’s tips. Again, this is something I didn’t pick up for some while when I first started baking. You’ll find various other tips scattered throughout the book.

The recipes look to be really interesting and I have bookmarked a fair few of them. Each one starts with a little introduction, which I found to be a nice touch. Both historical and personal factoids are included; I didn’t know that the northern classic, singin’ hinnies got their name from the whistling noise they made when cooking.

There are a few gluten free recipes and a couple of “healthy” bakes, but the majority are full-on lip smackingly indulgent. Peaches baked in sweet wine are served with amaretti studded ricotta. Beehive bars for breakfast sound a tad decadent to me with their copious amounts of sugar, butter and syrup, but I’ wouldn’t say no to them at any other time of the day.

Rhubarb Tarte Tatin makes for a very interesting twist on the classic and one I am keen to try. Elvis gets a clever tribute with blue suede choux. That is to say, choux pastry filled with peanut butter cream and topped with caramel and bananas.

I was particularly pleased to see that chocolate was well represented throughout the book; chocolate cake filled with salted caramel custard had me reaching for a bookmark immediately.

I really don’t like the type face. It’s blocky and I found it a bit difficult to read. You can’t miss Stacie in the book with her vintage beehive hairstyle and heavy black eyelashes. In fact whilst the pictures are good, there seem to be far more of Stacie than the bakes she’s made. I would have preferred it the other way around.

All in all, however, I think Stacie Bakes is worthy of a precious place on my cookbook shelves.

As well as adapting her recipe for honey madeleines, I made Stacie’s cheese and leek scones for Easter Tea. Other than substituting some of the flour for wholemeal, I pretty much stuck to the recipe.

They were the star of the show, knocking my simnel cake, choc cross buns and other fancy treats into the shade. I shall certainly be making them again. Both recipes were easy to follow and very importantly, worked.

Thanks for visiting Tin and Thyme. If you have Stacie Bakes or have made anything from it, I’d love to hear about it in the comments below. Do share photos on social media too and use the hashtag #tinandthyme, so I can spot them.

If you’d like more book reviews, follow the link and you’ll find I have quite a lot of them.