A review of two food books, neither of which are cookbooks. A History of Food in 100 Recipes by William Sitwell is all about the history of food from a Western perspective. And The Diner’s Dictionary by John Ayto is all about the word origins of food and drink. 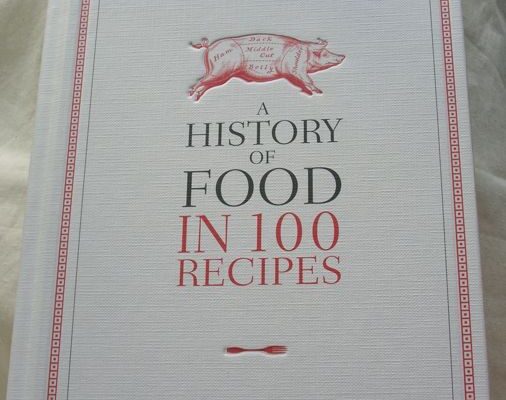 A History of Food in 100 Recipes

As the title suggests, A history of food in 100 recipes is a collection of stories elaborating on the history of food from a Western perspective. The book begins with a recipe for bread in Ancient Egypt from about 2000 BC and journeys through the ages right up to the present day where it ends with a recipe for meat fruit by Heston Blumenthal. Each chapter commences with a recipe – of sorts. These are taken from sources of the period so are not necessarily easily understood or recognisable as a modern recipe. This then leads into the chapter proper which is connected in some way with the recipe. The book is an engaging way of reconnecting with our food and where it comes from. It’s a treasure trove of fascinating facts, a history book written in a light, humorous and accessible style. I’m thoroughly enjoying it.

The Author William Sitwell is a food critic, journalist and presenter. He currently edits the food magazine Waitrose Kitchen amongst a plethora of other activities including gardening and being the resident expert on BBC TVs A Question of Taste. He has by no means covered the whole history of food, but has picked out the stories which particularly appeal to him.

Of course the first chapters I jumped to were the chocolate ones and I had two of these to revel in. Both interesting, both very different. The first was Hot Chocolate and recounts the well known “discovery” of chocolate by the conquistador Hernan Cortes. During his stay with Montezuma he learnt the secrets of the cocoa bean, so highly prized it was used as currency. And he enjoyed many a brew of spiced frothing hot (sometimes cold) chocolate. Cocoa beans went back with him to Spain where the drink soon became revered for its health giving properties. The second was Chocolate Cake, a chapter that was more about the first modern supermarkets than it was chocolate, but which featured an interesting chocolate cake recipe using bread flour. I shall certainly be trying that out at some future date. This chapter tells the remarkable story of Clarence Saunders in the USA and the founding of his chain of self service stores, Piggly Wiggly, in 1916.

Being a vegetarian, I was fascinated to learn in the chapter Cauliflower & Cheese, that the Vegetarian Society was formed as far back as 1847 with a surprising 150 members signing up at its inception. The first vegetarian cookbook was published as far back as 1812, Vegetarian cooking by a Lady (anonymous in other words). Amazingly, by 1897 there were seven vegetarian restaurants in London. I had always assumed that early Western vegetarians had chosen this diet for health reasons rather than ethics, but I was wrong. As far back as Pythagoras, vegetarians were also also motivated by animal welfare. This chapter is not for the faint hearted and perhaps should come with a warning; there are some very gruesome descriptions of animal brutality.

The book is a wonderful mix of facts, stories, interesting characters and recipes. It currently resides on my bedside table as it is a great book for dipping in and out of and the chapters are very short. By the time I get to bed, I can hardly keep my eyes open, so having a chapter which is just three to five pages long is ideal. Never has the term bite sized chunks seemed more appropriate.

This book was sent to me for review purposes and as always, all opinions expressed are my own.

Now I do like to know the origin of words, language is interesting and the language of food tells a long and complicated story about food and our relationship with other places and cultures. I was recently sent a review copy of the Diner’s Dictionary: word origins of food and drink by John Ayto. CT and I both dived in with relish.

This second edition is a small hardback which makes it easy to handle and unlike other weightier tomes is more likely to be referred to on a regular basis. With over 2,000 entries from Abernethy biscuit to zwieback, it is full of fascinating facts and like pottage can be dipped into at will. Pottage, interestingly is the predecessor of porridge, a phonetic change from t to r creating the oaty breakfast we love so much in this household. Who knew? A brief perusal will lead you down all sorts of interesting avenues and before you know it half an hour has gone. It also makes excellent bedtime reading as proved by its strange and regular migration to CT’s bedside table. Biscuit lovers may be reassured to notice that the Alpha and Omega of this dictionary are both biscuits.

Strangely (or not), chocolate was the first word I looked up. I was not expecting to find anything I didn’t already know about this food of the gods, but I was curious to find out what sort of coverage it was given. I was gratified to see it was one of the longer entries. In fact, I did learn something. The Aztecs made their cocoa drink with cold water rather than hot. It was the Spanish who introduced the use of hot water, a practice for which I’m very grateful as I warm my hands on my mug of cocoa on chilly evenings.

For all those keen bakers out there, the words flour and flower, I learnt were once identical. “The usage goes back to the early Middle Ages. When grain was milled, the most highly valued part, the meal, was characterised as the ‘flower’, the finest portion, as contrasted with the husks or bran”. This makes perfect sense, but I’d never thought of it before.

The first word CT looked for was “oca”, one of his wacky root crops; hooray, it was there. This, he took to be a good omen. However, he very soon revised his opinion downwards as the scientific name was not included. On further perusal of the other entries, he was further disappointed to find that no plant or animal scientific names had been included anywhere. For a dictionary, he felt, this was quite a serious lack. My copy of The Oxford Companion to Food by Alan Davidson, by contrast, includes scientific names of both plants and animals. The Diner’s Dictionary is also an Oxford University Press publication and we wondered if this represented a dumbing down of our great centres of learning.

With a recommended retail price of £12.99, this would make a fun and welcome addition to the food lover in your life’s Christmas stocking.