As a result of making some hollandaise sauce one night to go with some delicious Cornish asparagus (sadly not our own – yet), I had a couple of egg whites knocking around in the fridge that needed using up. 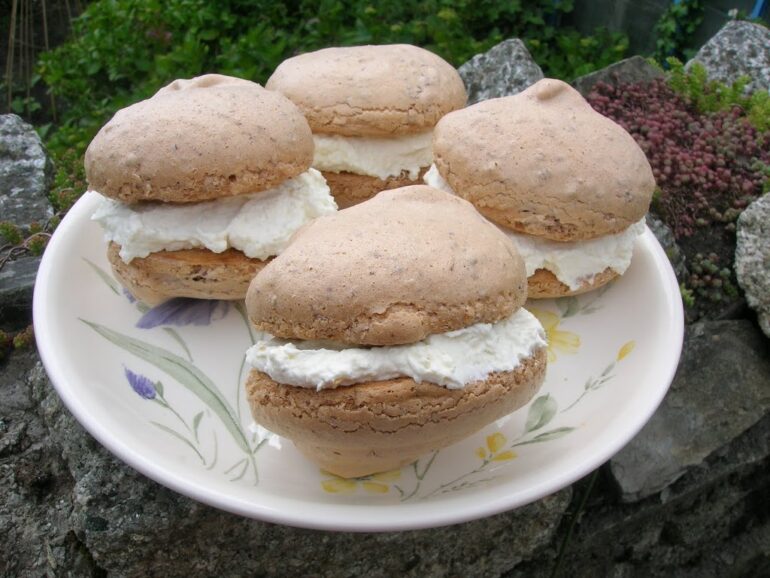 I also had a rose which was just about to open. A beautiful deep red scented rose that was going to have the elegance bashed out of it by the high winds we were experiencing that day. I could of course make rose syrup with it. But my mind went back to a party I’d hosted a few years ago when I’d made rose meringues to much adulation and applause (well perhaps only the latter). Brilliant, I’d make those.

Could I find the recipe anywhere? No, of course not. Oh well, it shouldn’t be that difficult to work out I thought. And actually it wasn’t. I was rather surprised though to find the egg whites went blue rather than pink when I added the rose petals. I’m a bit cross with myself for not taking a picture at this stage, because it was such an unusual colour.

In fact I’d just read a post by Johanna GGG all about blue foods or the lack of them that very morning. I shouldn’t have been surprised because remembering back, the very same thing had happened the last time. Egg whites must be quite alkaline I guess. To my disappointment, the meringues lost their blueness in the oven.

What To Make With Leftover Egg Yolks

This recipe leaves one leftover egg yolk. However, I always see this as a good opportunity to make something else. That something else is usually some sort of custard. But there are other delicious options.

Here are all the recipes on Tin and Thyme that use only egg yolks.

The meringues had a lovely subtle rose flavour to them. They were crisp on the outside and chewy in the middle, which is just how I like them. The tartness of the yogurt offset the sweetness of the meringues and to be honest, I’m not really sure what the white chocolate brought along. I’d added just the right amount of rose water for the cream to echo the taste of rose in the meringues without being overwhelming or too sickly. At least I now have a recipe for the next time I’m inspired to make rose meringues.

If you fancy having a go at some vegan meringues, I also have a recipe for brown sugar aquafaba meringues.