There’s nothing quite as comforting as a good old fashioned pudding. This self-saucing chocolate pudding is easy to make and a real crowd pleaser too. Think warm chocolate sponge soaked in real chocolate sauce. The magic happens as it bakes. 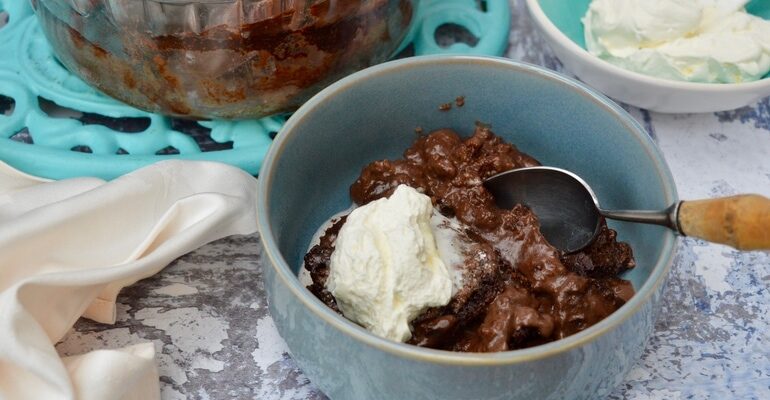 Although the day is bright, the sky is blue and spring can’t be far away, we woke to a white snow filled world again this morning and it’s feeling distinctly wintery.

Unless we have friends over to eat with us, puddings are a rare event in our house. Cakes don’t count, naturally. But the other day, comfort food was what we needed. We’d toiled away for hours sorting out a huge backlog of papers and then we got chilled when we ventured out to do the shopping.

Amazingly, I’ve only made this self-saucing chocolate pudding once before and that must have been at least a decade ago. I remember it as being successful and appreciated. So I’m not sure why I’ve failed to repeat the experience until now.

The original recipe comes from The Essential Vegetarian Cookbook*, which is one I picked up in a remaindered bookshop many years ago. Unlike others I’ve bought on a similar whim, I do actually use this one, however occasionally. As there were only two of us I didn’t use the full quantities given. But I couldn’t do an exact split, so the ratios ended up being rather different to the original recipe. I also find a bit of cinnamon to spice it up goes down a treat.

To make the pudding, you just need to create a basic sponge. But there’s no need for creaming or getting a mixer out. Just melt the butter, mix in the sugar and eggs then add the dry ingredients followed by the milk. It’s an easy all in one pan method.

Then all you need to do is create a very basic chocolate sauce and pour it over the sponge. When I say basic, unlike many other puddings of this type, my chocolate sauce is made with real chocolate, not just cocoa. A glass pyrex soufflé dish* is ideal for this sort of pudding. Into the oven and half an hour later you have a beautiful self-saucing chocolate pudding oozing with scrumptiousness.

This saucy pudding was as good as I remembered it and it certainly did a good job in providing much needed comfort. Despite the large quantity of liquid, the sponge soaks up the majority of the sauce, leaving a light but moist sponge with deliciously gooey patches welling up through it. The dark chocolate sauce which has no added sugar, makes for a rich but not overly sweet pudding. Just the way I like them. We had ours with some delicious local organic crème fraîche.

In fact, this pudding is so good, it’s become an occasional regular on our table. We particularly like it spiced up a with chilli chocolate. Serve it with cream, crème fraîche or ice-cream for something even more special.

This classic British pudding is also known as chocolate puddle pudding. Both names give the clue to what sort of dessert it is. As described above, you make a basic sponge mixture, then you add a very liquid chocolate sauce. Whilst the pudding is baking, the lighter sponge rises to the top, leaving a layer of sauce at the bottom.

Although, once the pudding is removed from the oven and starts to cool down, the sponge soaks up even more of the sauce. By the time it’s cold, the sauce has all but disappeared. For this reason, it’s best to eat this self-saucing pudding whilst it’s hot.

This recipe uses wholemeal flour. Bran inhibits the ability for bakes to rise. So, discard any large bits of bran that are left in the sieve. I usually chuck mine onto the garden as it’s not good for slugs. Otherwise, it goes onto the compost heap.

The possibilities for flavour when it comes to this self-saucing chocolate pudding are endless. The higher the percentage of chocolate you use, the richer and less sweet your sauce will be. So if you have a sweet tooth, you might want to go for milk chocolate or a low cocoa content dark chocolate. I find 85% dark chocolate works for us.

Our favourite way to enhance this self-saucing chocolate pudding is to go Mexican. I’ve already mentioned that I add cinnamon to the sponge mixture. So for this warming spicy number, I make the chocolate sauce with 70% dark chilli chocolate*. This works an absolute treat to give a warming pudding that doesn’t blow your head off. It also reminds me of the ancient Mayan origins of chocolate. They would often combine it with chilli to make a much revered drink.

Really, it’s all up for experimentation, but I think orange chocolate would be lovely. Ginger flavoured chocolate and raspberry could also be good. But remember, the sauce is soaked up by the sponge, so the flavours will be subtle rather than in your face.

Cinnamon Not Your Thing?

If you don’t like the idea of cinnamon, just omit it from the recipe. But you might like to add a teaspoon of vanilla extract instead. Chocolate and vanilla have a great affinity for one another and it will make your chocolate puddle pudding sweetly fragrant.

If you’re after more pudding ideas, take a look at my pudding category.

Thanks for visiting Tin and Thyme. If you try this recipe for self-saucing chocolate pudding, I’d love to hear about it in the comments below. Do share photos on social media too and use the hashtag #tinandthyme, so I can spot them.

The higher the percentage of chocolate you use, the richer and less sweet your sauce will be. So if you have a sweet tooth, you might want to go for milk chocolate or a low cocoa content dark chocolate.Please note: calories and other nutritional information are per serving. They're approximate and will depend on exact ingredients used.

This post contains affiliate links to Amazon*. Links are marked with an *. If you buy through a link it won’t cost you any more, but I’ll get a small commission. Thank you for your support of the brands and organisations that help to keep Tin and Thyme blithe and blogging.