Having received virtually a fridge load of TOTAL Greek yogurt to try I have, not surprisingly, been using and making quite a few things with yogurt recently – it wasn’t a hardship! I had both full fat and 0% fat varieties to try. Not generally being a fan of low fat, I dived straight into the full fat version, which was particularly thick, lush and creamy. It was delicious just eaten straight out of the tub. Chocolate pudding immediately sprang to mind, mostly because I had just seen this luscious looking chocolate banoffee cup on the Ordinary Cook’s site and knew I wanted to make something similar. In the end I made something quite dissimilar, so I still have the original recipe to look forward to. Here’s what I did:
This was surprisingly impressive for such a fast and simple dish to prepare and one I shall be using when I need a quick dessert I can prepare in advance for guests. It would be great with a layer of sliced strawberries underneath and maybe an orange liqueur rather than amaretto. CT, who had no idea I was making these, got very excited and thought they were so delicious that they should become a regular item on our dinner table. 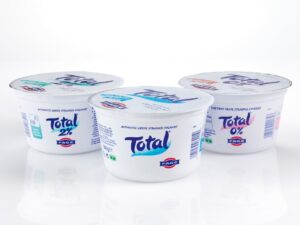 Because of its creaminess, it worked really well in the chocolate & lime cheesecake which I couldn’t help making again as I had the very good excuse of an abundance of yogurt to use up! It also worked exceptionally well incorporated into the topping on the chocolate lavender cake I recently made.
Although not generally a fan of low fat products – fat has been unfairly demonised in my opinion – I was quite impressed with the taste and texture of this 0% fat product. CT, who is also not a fan, took a couple of the 150g tubs to work for his lunch and enjoyed them. The 0% fat, being lighter, worked well in cakes. I made some delicious passionfruit and white chocolate cupcakes, which I shall be posting about later. They turned out to be really light and had a great consistency, so I put this down to the yogurt. I also used some in the simnel cake I’ve made, but as I haven’t tried it yet, I couldn’t possibly comment!
CT and I tried this with both muesli and granola. As it was so thick, it didn’t actually work very well, there wasn’t enough liquid in it to soften the grains. It could have been thinned down with milk, but that seemed rather to defeat the object. 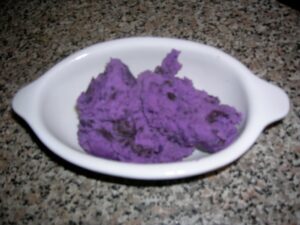 Just in case anyone is thinking that I survive solely on a diet of chocolate, I did use the yogurt in a couple of savoury dishes. I thought I would try the full fat variety in mashed potato instead of the usual butter and milk and I was seriously impressed with how creamy the potato turned out with the added bonus of a yogurty tang. We grow purple fleshed potatoes hence the rather strange hue of this mash in the photo. As it is so rich, thick and creamy, I thought I’d try it as a sour cream substitute and used it to accompany the cocoa refried beans that I make from time to time. Both CT and myself thought it worked just as well as the original sour cream.
0
Shares
Share  on Facebook  Share  on Twitter
Tags: yoghurt