Tart juicy raspberries provide a delightful contrast to sweet vanilla-infused cake in this easy recipe for white chocolate and raspberry blondies. The blondies are slightly fudgy with crunchy bits of caramelised chocolate which just add to the fun. They’re perfect afternoon tea material and robust enough to transport to picnics and potlucks. 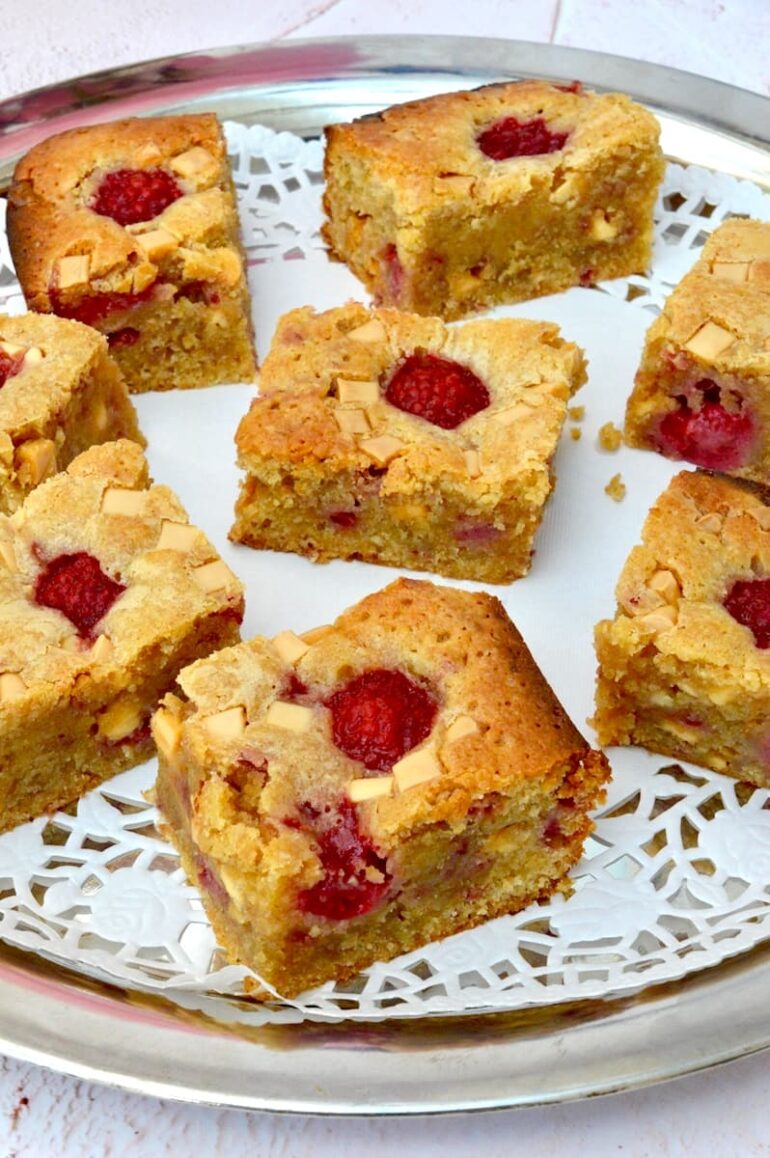 Sweet and sour is such a good flavour combination. I particularly like pairing raspberries and white chocolate together for this reason. When I needed a picnic recipe for a little jaunt to the beach recently, I was inspired by a display of Cornish raspberries at our local greengrocers.

Thus it was that when I needed a picnic recipe for a little jaunt to the beach, I made this blondie recipe with raspberries and caramelised white chocolate. All I needed to do was dash down to the greengrocer for a punnet of raspberries.

Just like brownies, these white chocolate and raspberry blondies are really easy to make and the hands on time is minimal. The only difficult bit is judging when they’re ready to come out of the oven. But oh my days, they are so good. They’re perhaps a little cakier than I’d expect from a good brownie, but they are, after all, blondies, not brownies.

Start by melting the butter, then adding the chocolate. Use a large pan as this will also be your mixing bowl. I’m a great believer in reducing the amount of washing up whenever possible.

I keep a couple of vanilla pods in a jar of golden caster sugar. You just never know when you’re going to need some vanilla sugar. It makes a lovely addition to cakes and bakes and it’s a bit more subtle than adding vanilla extract. As soon as I use any sugar from the jar, I refill it, so I always have some on standby.

I use duck eggs when I can get them as they’re just so good for cake baking. Take a look at my post on duck eggs for the reasons why. Most of the time though I use large hens eggs.

Break the eggs into the pan and beat until you have a smooth and glossy mixture.

As with most of my bakes I use wholemeal spelt flour for these white chocolate and raspberry blondies. Spelt is my favourite flour for baking, but you can substitute with ordinary wholemeal flour.

If you use a good gluten-free flour, you can easily make them gluten-free.

Numerous people have eaten and enjoyed my blondies and no-one has ever noticed they contain wholemeal. But I do remove the larger bits of bran. Just use a large mesh to sieve in the flour, then discard any bran that’s left. Fold in to the mix.

If you grow your own, so much the better. But if not, try and get locally grown raspberries if you can. They’re more likely to be fresher, travel distance is minimal and it helps to support your local economy.

Hang on to twelve raspberries to place on top of the blondies. Fold the rest in along with the white chocolate chips. It’s hard not to break up the raspberries, but try and keep a few whole if you can.

Scrape the batter into a twenty centimetres (eight inch) square silicone mould or lined tin. I use silicone just so I don’t have to line anything. It’s one less step and reduces waste too.

Scatter white chocolate chips over the top, then place the reserved raspberries strategically over the top. It’s good to get a raspberry in the middle of each future slice.

Pop the pan into the oven and bake for about twenty minutes. You want the top to be set and golden, but with a slight wobble in the middle.

When they come out of the oven, leave in the tin to cool completely. Then turn out and slice into twelve pieces.

Well, assuming you can stop yourself from polishing them off immediately, blondies will keep for a three days. Just make sure they’re in an airtight container and the air temperature isn’t too warm. They’ll keep for up to a week in the fridge.

You can also freeze them for up to three months.

Thanks for visiting Tin and Thyme. If you make these white chocolate and raspberry blondies, I’d love to hear about it in the comments below. And do please rate the recipe. Have you any top tips? Do share photos on social media too and use the hashtag #tinandthyme, so I can spot them.

If you’d like more brownie & blondie recipes, follow the link and you’ll find I have quite a lot of them. All delicious and nutritious, of course.

Can use frozen raspberries. Just stir them into the batter whilst still frozen.
Please note: calories and other nutritional information are per serving. They’re approximate and will depend on exact ingredients used.

When I first made this recipe, I also had Tea Time Treats very much in mind. Karen of Lavender and Lovage had chose picnics.

As I used local Cornish raspberries in these blondies, it made this post just right for Shop Local over at Elizabeth’s Kitchen Diary.