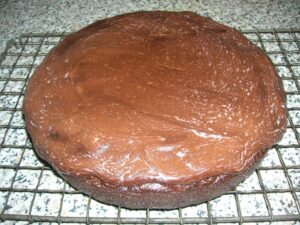 About 2 years ago, there was a great series of radio 4 plays about baking. The very first play was about making a chocolate cake with mayonnaise. How weird I thought, then forgot all about it. A few days ago, I again heard mention of mayonnaise used in cakes. So maybe it wasn’t just a few crackpots in a play! In need of a cake for a camping trip, I fished out the recipe and set to.

This is how I did it:
The “bitter” in the title refers to the bitterness in the play, but I suspect with all that chocolate as well as coffee, it will be a cake for the discerning palate. As we won’t be tucking into this until we are safely ensconced in our holiday retreat, I’ll have to report back at a later date on the cake’s edibility!
13 September 2009
Back from our break and have to report that the cake was delicious. Bitter was an apt name, as I thought it might be – all that dark chocolate and coffee played its part. Moist, rich and not too sweet, a little went a long way and lasted us most of the week. What about the mayonnaise? Well, if truth be told, we could taste it occasionally – presumably where it wasn’t as well mixed as it might have been! It was fun to try, but next time I make the cake I think I’ll just use eggs and butter.
Previous Post: « Peanut Butter Blondies: The Absolute Best
Next Post: Hazelnut and Apple Chocolate Cake »