Kohlrabi is one of those vegetables that’s lurking under the radar. Many people haven’t heard of it at all or if they have, they don’t know what to do with it. We had one delivered in our veg box this week along with a load of new season carrots. Instead of putting it on the veg rack to do something with later, I decided there was no time like the present and made this most delicious kohlrabi carrot slaw. 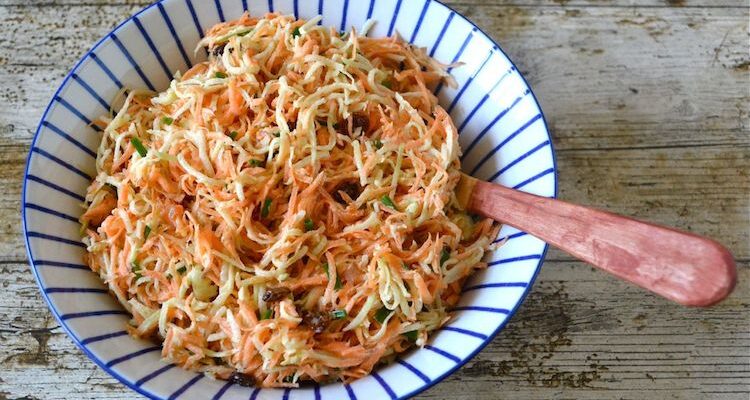 We’ve tried growing kohlrabi down on the plot a few times, but our success rate has not been high. For those not in the know, kohlrabi is a bulbous vegetable from the cabbage family. It’s actually a swollen stem rather than a root. Its name means turnip-cabbage in German, but it’s also known as German cabbage. Surprisingly for a northern vegetable, it’s also popular in India and Vietnam. It has a milld slightly sweet, slightly turnipy flavour. Its crisp texture works well in salads, stir-fries and gratins. The leafy greens sprouting from the top can also be eaten.

Ideally, I’d have sliced some spring onions into my kohlrabi carrot slaw, but I didn’t have any to hand. Luckily my chives are up and doing well, so I used a handful of those instead. A bit of lime to freshen it up, a small amount of mayonnaise for creaminess, a little mustard for heat, a few raisins for interest and job done. For an alternative vegan dressing, you could try the one I used in this orange ginger carrot salad.

We’ve been eating the kohlrabi carrot slaw with smashed avocado on toast or cheese toasties and it makes a satisfying and tasty accompaniment to both.

Will keep in a covered container in the fridge for up to 5 days.

I’m sharing this delectable salad slaw with Katie at Feeding Boys for Simple and In Season.

Thanks for visiting Tin and Thyme. If you make this kohlrabi carrot slaw, I’d love to hear about it in the comments below or via social media. Do share photos on your preferred social media site and use the hashtag #tinandthyme, so I can spot them. For more delicious and nutritious recipes, follow me on Twitter, Facebook, Instagram or Pinterest.