Crunchy on the outside and chewy in the middle these nutty fruity meringues have a great depth of chocolatey flavour. 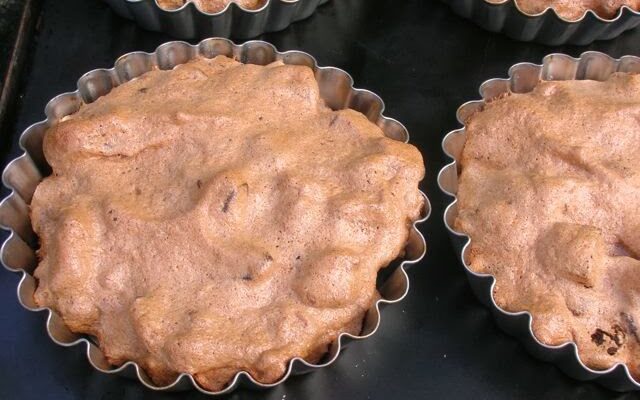 Oh wow, I can’t believe it took me so long to try the pear and almond dark chocolate that I was sent some months ago by Elizabeth Shaw. The blackberry and ginger was good, but this is one I can see becoming a regular. I have a penchant for almond chocolate anyway; this one has the wonderful crunch of almond slivers and a faint yet perceptible pear flavour which was a surprisingly good combination. The dark chocolate is mild giving richness without bitterness. I used most of the bar to make these tortes. Sadly I only left 20g of it to enjoy as was intended and enjoy it I did.

After making yogurt custard, I had some egg whites to use up. These tortes had caught my eye from a book CT had given me for my birthday, High Tea: recipes with a sense of occasion, an Australian book which has a lot of very good traybake ideas I’m keen to try. The original recipe contained dates, but as I had been sent some Crazy Jacks apricots to try out, I thought I’d substitute those instead.

Crazy Jacks apricots are used regularly in this household as they are unsulphered and organic. I actually prefer the flavour of these dark brown apricots which is quite toffee like. These ones were the soft, ready to eat variety, so they were softer and slightly less chewy than the dried ones I’m more familiar with, but still had the lovely toffee flavour. These won Gold at this year’s Soil Association Organic Awards, and I can see why. They are delicious eaten just as they are, but of course are also good chopped up on breakfast cereals, in fruit compotes and in cooking. Grown in the Euphrates valley in Turkey, these apricots are dried naturally in the sun making them particularly delicious as well as nutritious.

They are available from Tesco, Ocado, Amazon and all good health food shops and cost £2.99.

Thank goodness I decided to use rice paper rather than just grease the tin bottoms as directed in the recipe; I think they would have been difficult to remove otherwise. The tortes weren’t nearly as sweet as I was expecting them to be. CT described them as having a sort of grown up quality about them. As you’d expect from a meringue, they were crunchy and light on the outside, but chewy in the middle. The walnuts and apricots gave extra crunch and chew and the chocolate added a good depth of flavour. These are going to become a firm favourite I suspect.

Walnuts were one of the main ingredients used in these chocolate, apricot and walnut tortes and played a very important part both in texture and flavour. So I am sending these off to One Ingredient hosted by Laura of How to Cook Good Food which is walnuts this month. Nazima of Franglais Kitchen hosts the event on alternate months.

If asked to describe these tortes, I would have some difficulty, but the closest would probably be a biscuit – a light chewy and crunchy biscuit. With this in mind, I am submitting them to the Biscuit Barrel with Laura of I’d Much Rather Bake Than …. The theme this month is “bookmarked” and this recipe was bookmarked as soon as I first saw it.

Thanks to Kasia of Fuel Pr International for sending me a packet of Crazy Jacks apricots to try. I was not required to write a positive review and as always all opinions are my own.