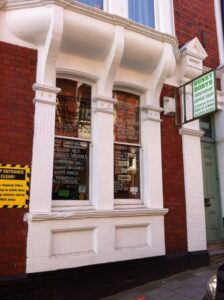 I’ve been following Shaheen’s blog, Allotment2Kitchen, for a few years now. I first knew her as MangoCheeks when she was living in Glasgow with her productive allotment and creative vegetarian cooking. Somehow, despite having a full time job, she managed to blog almost daily. She now has less time for blogging because she is running a vegetarian cafe in Newport and is having plenty of practice in putting her creative culinary skills to even better use. The cafe is Hunky Dorys – if ever you are in the vicinity of Newport, I strongly recommend you hunt it out.

Back in April when we were in that neck of the woods for my cousin’s wedding, I was hoping we would find a bit of time to slip away and pay Shaheen and Hunky Dorys a visit. Luckily we did and a had a quick tour of Newport into the bargain. We slipped off after breakfast on Satruday morning and arrived in Newport bright and early, too early for Hunky Dorys, which didn’t open until 10:00. This actually worked out really well as we had a chance to explore the city. The highlight for us was an impressive mural of the Chartists in an underground passage in the town centre. We were rather horrified to learn later from Shaheen that it was going to be knocked down to make way for a new shopping centre. Apparently feelings in the city were running high as a demonstration to protest against its demolition was going to be held later that day.

So to Hunky Dorys. I knew the food was going to be good, but had little idea what else to expect. I was delighted with what we found, we both were in fact. I now have serious cafe envy and wish we had something like it closer to home. The style was informal and friendly with wooden tables and chairs, cushions if you wanted them and various blackboards listing the scrumptious fare on offer – now that’s what I call a proper vegetarian cafe. Breakfast and lunch are served as well as coffee and cake of course. I was impressed by the wide selection of speciality teas which included some particularly unusual ones. The menu changes regularly, so customers don’t have a chance to get bored and vegans have plenty to choose from. Some of the fresh produce is home grown adding resonance to the name Allotment 2 Kitchen, or in this case Allotment 2 Cafe. I would have been very happy to stay for lunch as there were several things that sounded specially appetising and Shaheen’s pies in particular are legendary. She has recently written a post about the first one she made, garlic mushroom parsley pies. My photographs, sadly do not to it justice, but they are the best I have.

Having ordered our cake and cups of chilli and ginkgo tea respectively, we sat down to soak up the ambience. Cakes? Yes, even after a massive breakfast at the hotel, we could not resist the array of tempting treats laid out before us.  CT went for a strawberry chocolate cake and I had an Oreo chocolate one – both vegan and both absolutely delicious. We were soon joined by Shaheen, who managed to spare us a few minutes from her busy cooking schedule for an impromptu chat. CT thought she was absolutely gorgeous (which she was), so I had to remind him she was already taken. Corroboration came in the form of her husband D, who I was really pleased to meet as he is often mentioned on the Allotment 2 Kitchen blog. After a longer chin wag than she’d intended, Shaheen had to get back to ensuring her customers had something to eat for lunch, D had to go into town and we had a wedding to attend. It was with some regret that we had to leave so soon. It was a joy to meet Shaheen and finally get to see her excellent cafe. We both wish her every success with it.

Shaheen is hosting this month’s We Should Cocoa and has chosen a particularly appropriate ingredient – do take a look.