That goat, otherwise known as Ethel, has filled my head with thoughts of goats cheese and chocolate and I can hardly think of cooking with anything else. The fig and goats cheese tarts still have my mouth watering at the thought of them. At the weekend, rather than making my normal loaf for my work sandwiches, I thought I’d try something a little different to take in for lunch. Some lightly vinegared baby beetroot was in the hamper I received for the #capricornchallenge.

Beetroot and chocolate in cake form has become something of a classic in recent years, but I wanted to try a savoury version.  I am a big fan of beetroot, CT less so. I figured that he might find beetroot more palatable contained in a savoury muffin with lots of goats cheese. And if he didn’t? I was very happy to eat them all by myself.

I was hoping the vinegar in the beetroot would combine with the yogurt and help the muffins to rise, but not make the muffins sour. I didn’t want the chocolate to dominate, but I did want it present – the proof of the pudding would literally be in the eating. 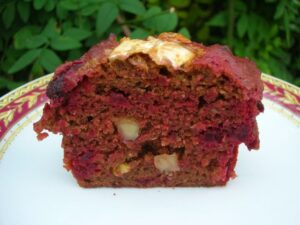 The shocking pink of the batter was beautiful before it went into the oven and I’m rather sorry I didn’t take a picture of it. It was brown by the time it came out, not in bad way, but not quite as impressive as I’d hoped.

We had some warm for breakfast on Sunday morning. Amazingly, CT thought they were good. He took some for his lunch that day and came back raving about them. I couldn’t quite believe it. I took some in for my lunch on Monday and I understood just what he meant. They were beyond delicious, bordering on addictive and a very satisfying meal in themselves. Goats cheese was the first thing to kick in, followed by the flavour of walnuts and then beetroot and not a sour note to be had. The cocoa did just as I hoped and gave a supporting role in bringing out the other flavours, rather than taking the lead. The only downside was these were not the normal one bowl wonder you expect from a muffin mix; I used three. Still, the washing up was worth it.

These are versatile, portable and would make a great picnic item as well as a good lunch, brunch or filling breakfast. Incredible as it may seem, they kept well too – CT was sworn to eschew any more so I could finish them off for my lunch today.

Thank you Ethel for inspiring me to come up with another fabulous chocolate and goats cheese recipe.

As beetroot are looking good and in season right now, I am submitting this to Ren’s monthly Simple & in Season. It is being hosted this month by Nazima over at her new blog Franglais Kitchen.