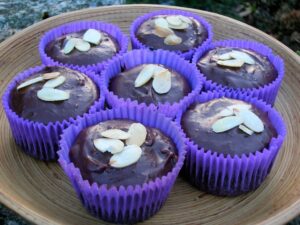 Yesterday afternoon we were going to friends for tea so I was presented with another opportunity to make something chocolatey. I was rather inspired by the white chocolate cupcakes at Chocolate Teapot and thought I would make these. However, I was also inspired by the chestnut and chocolate combination over at Mainly Baking and I remembered I had some leftover chestnut puree that needed using up – the white chocolate cupcakes would have to wait for another day.

This is what I did:
We ended up having a veritable feast of cake as a carrot cake and a lemon cake had also been made. CT is fast regaining the weight that he’s lost over the last couple of months. The cupcakes were divine – a lovely moist consistency with a clearly discernible chestnut flavour and the icing was totally delicious. Yum, yum, will be making these again.
Previous Post: « Mint Chocolates: an After Dinner Favourite
Next Post: Chestnut Biscuits with a Chocolate Cream Filling »