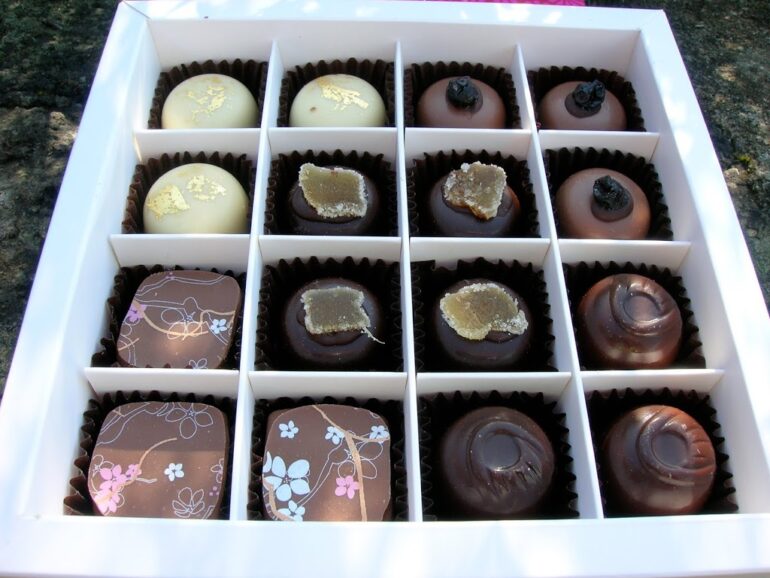 Since hearing quite a bit recently about combining chocolate and tea, I have been intrigued by the concept. I have been wanting to try making my own matcha or Earl Grey cakes and/or biscuits but still haven’t managed it yet. So, I was very excited to receive a box of tea chocolates from Matcha Chocolat in the post. 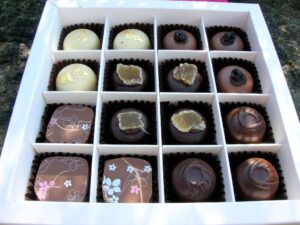 This box of tea chocolates was the Emperor’s Selection and was beautifully presented in pink with Matcha Chocolat’s distinctive Chinese teapot logo on the sides. The chocolates looked so good when I lifted off the lid, that I experienced conflicting emotions – get stuck in or just look at them with awe. These are definitely chocolates for savouring rather than wolfing down in the traditional British boorish style (or maybe that’s just us). Patience was called for however, as I first had to charge up the camera batteries and take photographs. As consolation, I had a good sniff and picked up a rich fruity scent. This could have been the result of the Valrhona chocolate used to enrobe some of the tea ganaches, which is renowned for having fruity qualities.
The chocolates are all handmade using fresh and often organic ingredients from an artisan choclatier whose ethics are very much at the heart of what she does. This of course gets my vote! 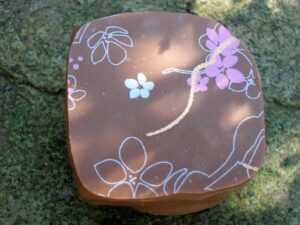 Uji Matcha – Beautifully decorated in a way that would be instantly recognisable to a Japanese person, this green tea ganache was enrobed in milk chocolate with a floral design. There was a slight, but noticeable green tinge to the ganache which was particularly smooth in the mouth. The matcha flavour is pronounced but not overpowering but leaves an almost savoury aftertaste on the palate – which is much nicer than it sounds. CT was transported straight back to Japan as the flavour of matcha is so distinctive and captured the taste of Japan for him. 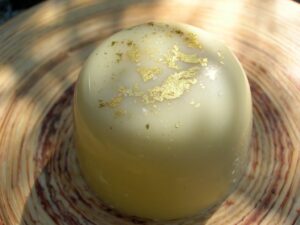 Jasmine Silver Needles – This was the most stunning to look at with its beautiful creamy white dome topped off with gold leaf which glittered delightfully. There was no detectable fragrance of jasmine before biting through the chocolate, but once inside the scent was released. The ganache was particularly creamy with a delicate but penetrating flavour of jasmine tea. 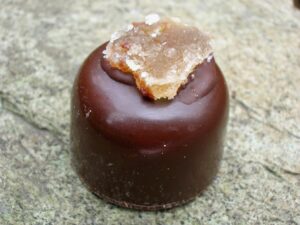 Masala Chai – There was no mistaking this one, it tasted just like a good cup of chai should do, warm, spicy, milky and sweet with the tea notes coming through loud and clear but by no means overwhelming the whole chocolate experience. The firm dark chocolate contrasted well with the soft milk chocolate ganache inside. The spicy notes of cardamom, cinnamon, ginger, pepper, cloves and aniseed lingered on for quite some time after the last vestiges had disappeared. Topped off with a sliver of crystallised ginger, this was a classy comfort food. 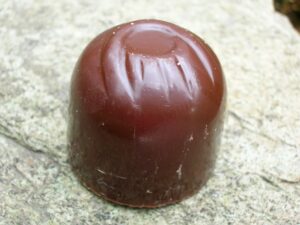 Midnight Peony – The dark chocolate casing had a strong fruity aroma which reminded us both of berries. However, once bitten into there was an immediate heady smell of alcohol followed very soon after by an unexpected smokey taste as though we were transported back in time to the Verandah of the Raffles hotel, white suited & posh frocked with mandatory cigarette holders in hand. The smokey flavour was certainly strong, but by no means unpleasant and combined well with the milk chocolate ganache. Interesting. 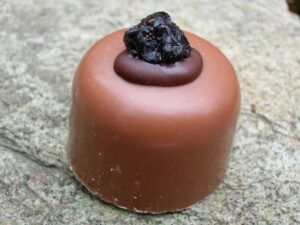 Blackcurrant Bliss – A smooth milk chocolate ganache enrobed with milk chocolate and a blackcurrant on top. We left this one until last as I thought the blackcurrant would dominate our palates for subsequent tastings. In fact it was quite subtle and very different to the crudity of certain blackcurrant and sugar beverages. Less is more in this case. The taste of black tea, Assam in this case, was noticeable though not overpowering.
As a drinker of green and white tea, I am not particularly fond of the black stuff, but I really loved these tea chocolates – all of them. I’m not even sure I could pick out a favourite if truth be told. They all challenged perceptions of what a chocolate should be and they all did it in the nicest possible way. Now I feel I should really do what I’ve been wanting to do for so long and make my own tea confections.
Previous Post: « Chocolate Mocha Layer Cake
Next Post: Chocolate, Raisin & Ale Cake »