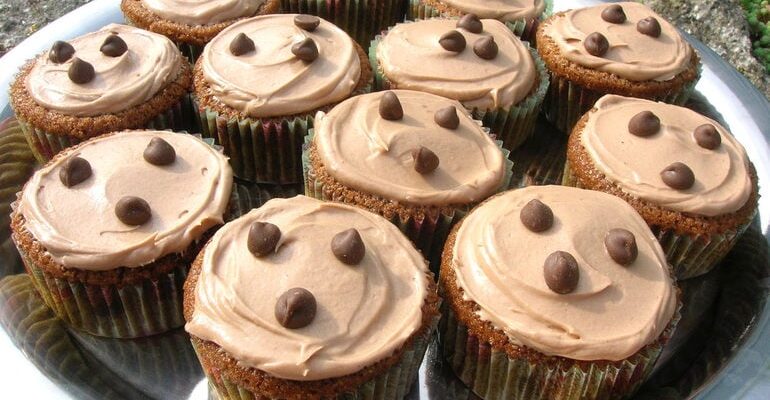 Last week was the nationwide Macmillan Coffee morning. It’s held annually to raise funds for cancer care. I took along a batch of these chai masala chocolate cakes to Jelly Pebbles, which was our venue for this most excellent of fund raisers. I also made some, on a third day of baking, for the Town Team’s bake sale.

Despite many attempts to oust it in popularity, it seems the cupcake is here to stay. To celebrate its Fine Cooks’ chocolate range, Dr Oetker have issued a new cupcake challenge – The Great Chocolate Bake.

Apart from the fun to be had in creating your own cupcake design, there is quite an incentive to win. The prize is a trip to the home of the cupcake itself, New York. You have until the 17th of October to make some sort of chocolate cupcake and enter it on the Dr Oetker Facebook page by submitting a photograph of your masterpiece.

Dr Oetker have a number of chocolate products that are ideal for making and decorating cupcakes. These include a dark 72% as well as a 54%, a milk 35% and white chocolate in 150g bars. They also offer chocolate chips and chunks in dark, milk and white.

With all this talk of cupcakes and a veritable cornucopia of Dr Oetker chocolate sent to me to use, my contribution was definitely going to be of the cupcake variety.

As regular readers will know, taste and texture are my prime concerns. The rest is literally icing on the cake. I’ve long been a fan of chai tea, despite my lack of partiality for the black stuff. I’ve always thought it would make an excellent flavour in cakes, but until now I haven’t tried it.

I adapted a recipe for Chai Masala Cupcakes from Indian Inspired Desserts by Roopa Rawal, mostly by adding chocolate. I’ve had my eye on this recipe for ages; it is a particularly interesting one as it is made without eggs.  Although I normally bake with dark chocolate, chai is such a sweet drink, I decided that milk chocolate would be the best choice in this instance.

I had to bake these in two batches as I didn’t have enough bun holders and just as well I did. The first batch fooled me and I thought they were done when in fact they weren’t. This resulted in a deliciously light yet fudgy consistency, but had the downside of sinking in the middle and pulling away from the bun cases which I wasn’t best pleased about.

The second batch I baked for a little longer and luckily they looked a lot better.

The cakes have a definite, but not overpowering taste of sweetly spiced chai tea. The texture is moist but also very light with a slightly fudgy consistency which everyone found most appealing. I was gratified to get some positive feedback from the two people who tried them before I left to go home and get my next next batch of cakes started.

I think these chai masala chocolate cakes are now my favourite fairy cake recipe. It’s an all round winner.

Thanks for visiting Tin and Thyme. If you make these chai masala chocolate fairy cakes, I’d love to hear about it in the comments below. And do please rate the recipe. Have you any top tips?  Do share photos on social media too and use the hashtag #tinandthyme, so I can spot them.

The letter selected for AlphaBakes this month is C. This means I could theoretically enter every bake I post this month using C for Chocolate. However, I am going for something a little bit different and am entering these as C for Chai. This is a monthly challenge hosted alternately by The More Than Occasional Baker and Caroline Makes.

As this is a recipe I’ve had my eye on ever since I got the book last year, I am submitting this to Bookmarked Recipes over at Tinned Tomatoes.