A simple but effective vegetarian side dish that will add pizzaz to any Mexican feast. Mexican brown rice is the same as Mexican rice, but made with the wholegrain rather than white. It’s also known as Spanish rice or tomato rice. This dish produces a lovely fluffy rice that’s not only tasty, but is healthy too. It takes a while to cook, but hands on time is minimal. This leaves you free to get on with other elements of the meal. 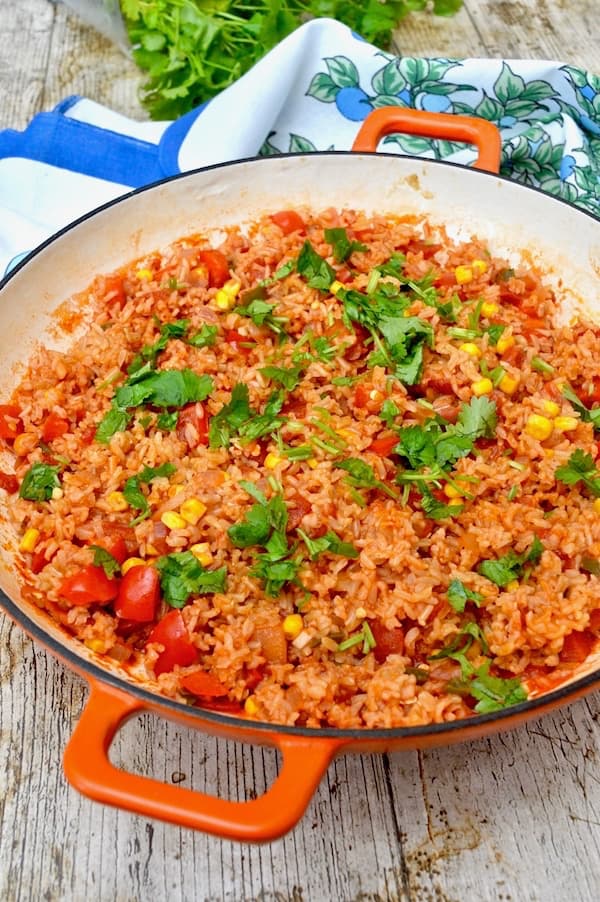 What is Mexican Rice

Mexican rice is a tasty dish of rice cooked with onions, peppers, tomatoes and cumin. It’s also known as tomato rice and Spanish rice in the Americas. It’s not, however, to be confused with Spanish paella. This is similar but the rice is short to medium grain rather than long and it’s spiced with saffron rather than cumin.

Watch out if you’re vegetarian or vegan though. Some Mexican rice is made with chicken or other meat stock, so do check if you’re eating out. It might also include butter.

How to Make Mexican Brown Rice

My Mexican rice is entirely flesh and dairy-free and thus suitable for both vegans and vegetarians too.

It’s a great way to spice up your rice and make it a little more interesting. It makes a delicious accompaniment to many Mexican meals and is an essential for any Mexican feast. In fact, this recipe is likely to become a mainstay in your culinary repertoire.

Mexican rice is mostly made with white rice. I prefer to make mine with wholegrain rice, as it’s not only healthier, but tastier too. Brown rice adds a slight nutty dimension. The dish contains mild chillies rather than hot ones, but you can always step things up a bit if you prefer a spicier finish.

Don’t just use any rice for this recipe, long grain is the one to go for. I use wholegrain basmati rice, just because there’s a limit to how many types of rice I can hold in my cupboard and that’s the one I use most often. Brown rice takes longer to cook than white rice and it also absorbs more water.

I soak my rice for eight hours in cold water or one hour in hot water, depending on how organised I am. This makes it easier to clean the rice and reduces its cooking time. Either way, make sure you wash the rice well and then drain it. It’s best to get ahead for this bit if you can so the rice has a chance to dry.

It’s best to use a medium to large brown onion for this dish. They generally have the most flavour. As you can see I used a red onion here as that was all I had. As always, it’s best to be pragmatic and work with the ingredients you’ve got.

Heat some oil in a large pan with a tight fitting lid. It’s best to use a wide shallow pan if you have one. Dice the onion, then fry for a couple of minutes over a medium heat until it goes translucent.

Sweet peppers such as bell or romano are what you’re after here. It doesn’t really matter which colour you choose. Green, yellow, orange, red or purple are all fine. It’s nice to have a contrasting colour though, so it stands out from the tomatoes. I only had a red pepper, so that’s what went in to this particular iteration of Mexican wholegrain rice.

Whilst the onion is frying, deseed the pepper and take out the stalk. Then chop into even pieces, slightly bigger than one centimetre, about half an inch in fact.

Add the pepper pieces to the onion and fry for another couple of minutes.

Step 4. Add The Jalapeño And Garlic

Whilst the sweet pepper is frying, chop the jalapeño pepper and garlic. If you’re not sure whether to keep the seeds in the pepper or not, see the section on green jalapeño chillies further down the post.

Add the jalapeño and garlic to the pan and stir.

I’ve added sweetcorn to my Mexican rice, but that’s not at all authentic. The real deal is made with onions and tomatoes only. But unless you’re serving corn as an additional side dish, it makes for a tasty and colourful extra If you’re not keen, just leave it out.

You can use either fresh, frozen or tinned sweetcorn. I went with frozen as I always have a pack in the freezer. If using tinned sweetcorn, drain it well before adding it to the other vegetables.

Add the sweetcorn to the other ingredients and stir.

One of the key elements to this dish is to fry the rice in oil before you add any liquid. It may seem a little odd to fry uncooked rice. But it really helps to stop the grains becoming mushy.

Add the drained rice to the vegetables in the pan and stir fry for a couple of minutes.

You can use fresh tomatoes for this Mexican brown rice if you really want to. I do if we have a glut in late summer. But most of the time I use a tin of chopped tomatoes, which makes it an awful lot easier and quicker.

If you use a can of whole tomatoes, chop them up with a knife, before adding to the pan.

Add the tomatoes to the rice.

The key to Mexican rice is to make sure you have enough liquid in the pan. But it’s also important that you use a pan with a close fitting lid. You want nice fluffy rice, not gloopy or burnt rice.

You can use a light vegetable stock or water for the liquid element. I usually add just water, although I’ll sometimes add a dash of something umami like soy sauce or miso.

It may seem that the rice can’t possibly absorb all the liquid in the recipe, but it will. It’s important to keep the lid on the pan so that the rice can steam away. Apart, that is, from an occasional check to ensure there’s enough liquid and the rice isn’t burning.

If the rice looks as though it’s getting too dry, add a little more water.

Once the rice has done its time, turn the heat off, but leave the pan where it is with the lid on and allow it to steam for a further five minutes or so. This helps the rice to finish cooking, absorb the rest of the liquid and become fluffy rather than mushy.

Fresh green jalapeño chillies are quite mild. Because of this, I don’t remove the seeds before chopping and throwing into the pan. However, their spiciness can vary, so if you prefer to have as little heat as possible, remove the seeds and placenta. The placenta is the bit that the seeds are attached to and it packs the hottest punch.

Jalapeño chillies are a medium sized fleshy chilli in the capsicum family: Capsicum annuum. These days they’re incredibly popular all around the world. But they originate in Mexico and are intrinsic to many Mexican dishes.

They’re generally harvested and used green, rather than red. Although when ripe, they’re smoked and hey presto, you have chipotle chillies. They lend themselves well to pickling and you can find jars or tins of jalapeño pickles in most supermarkets. Fresh ones are a little harder to source, but they’re worth seeking out.

What to Eat Mexican Brown Rice With

Mexican brown rice is a great dish to include as part of any Mexican inspired feast. But it also works well as a one pot meal if you add a little protein. Tempeh, tofu and beans are good vegan sources of protein, whilst cheese is also good for vegetarians.

Don’t limit yourself to just Mexican food though. Serve it with any type of bean dish, Mexican or otherwise. It’s also good with both tacos and fajitas. Or enjoy it, as we did this time, as Mexican rice bowls with black beans and feta, smashed avocado and pico de gallo.

Here are a few other suggestions:

Thanks for visiting Tin and Thyme. If you make this green vegetable galette, I’d love to hear about it in the comments below. And do please rate the recipe. Have you any top tips? Do share photos on social media too and use the hashtag #tinandthyme, so I can spot them.

If you’d like more Mexican inspired recipes, follow the link and you’ll find I have quite a lot of them. All delicious and nutritious, of course.

A simple but effective vegetarian side dish that will add pizzaz to any Mexican feast. Mexican brown rice is the same as Mexican rice, but made with the wholegrain rather than white. It produces a lovely fluffy rice that's not only tasty, but healthy too. It takes a while to cook, but hands on time is minimal. This leaves you free to get on with other elements of the meal.
Prep Time10 mins
Cook Time35 mins
Resting Time5 mins
Total Time50 mins
Course: Side Dish
Cuisine: Mexican
Keyword: rice, vegan, vegetarian
Servings: 6 people
Calories: 239kcal
Author: Choclette @ Tin and Thyme

Serves six as a side and four as a main.Crumble Mexican or feta cheese over the top if liked. Or fried crumbled tempeh is good for a vegan alternative.Please note: calories and other nutritional information are per serving. They’re approximate and will depend on serving size and exact ingredients used.

I’m sharing this recipe for Mexican rice with Sew White for #CookBlogShare.

Previous Post: « Cinnamon Swirls with Melt in the Mouth Shortcrust Pastry
Next Post: Carrot Top Pesto with Basil and Lemon »