A delicious and healthy vegan stir-fry packed with vegetables and cooked with tempeh in a sweet and savoury spicy sauce. This recipe for Korean glass noodles, known as japchae, is particularly rated for its crunchy colourful veg and slightly chewy, gluten-free noodles. 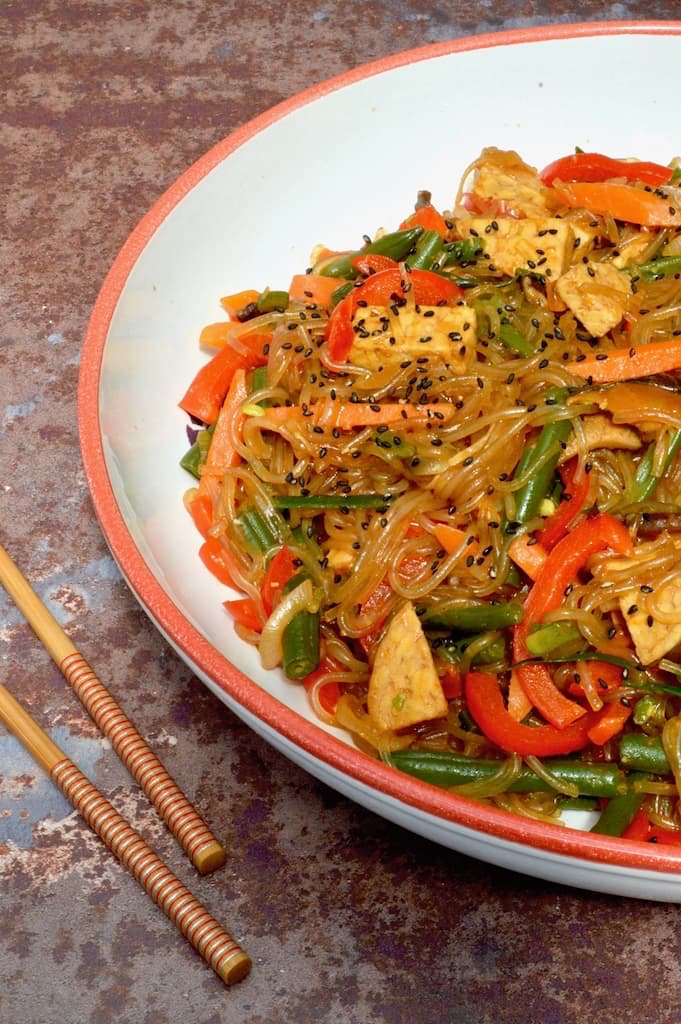 What Are Glass Noodles?

Sometimes called cellophane noodles, bean thread vermicelli or fensi, glass noodles are somewhat unusual. They’re made from sweet potato or mung bean starch, rather than wheat, rice or buckwheat. This makes them naturally gluten free. Once cooked they become translucent, like glass.

They’re particularly common in Chinese, Thai and Korean cuisines. With their slightly chewy texture and ability to absorb flavours really well, they make a delicious addition to the noodle family.

Korean glass noodles (dangmyeon) are made from sweet potato starch, so they’re not only low in calories, but they also have a low glycemic index. The single noodle strands are folded together like a skein of wool and are thus too long for easy manipulation. This means you need to either snap them into reasonable lengths before cooking or cut them up with scissors afterwards.

You can buy Korean glass noodles* online or at any respectable Asian food shop.

This stir-fry dish is traditionally made with a mix of colourful vegetables, mushrooms, noodles, meat and egg. It’s known as japchae in Korea where it’s really popular, mostly as a side dish. Glass noodles, made from sweet potato starch (dangmyeon), are the star of the show.

It’s all about the different tastes and textures. As regards flavour, japchae is a heady mix of sweet and savoury. Sugar generally adds the sweetness, but I use maple syrup instead. When it comes to mouthfeel, the contrast between chewy noodles and crunchy vegetables stimulates the senses. Japchae actually means “mixed vegetables”, which is exactly what I used.

My version is a bit easier than the traditional Korean Japchae, where every vegetable is stir-fried separately to maintain its colour. Pretty as that might look, I opt for simplicity where possible.

Strangely for a Korean recipe, Japchae isn’t particularly spicy. I’ve taken my own spin on it, however and added the Korean spice paste, gochujang. My version is also vegan. I swap the traditional meat and egg for tempeh. Tempeh is well suited to this stir-fry as it has a good robust texture and contains plenty of gut friendly fibre and protein.

You can serve these Korean glass noodles hot, as soon as they’re cooked. But they’re also good if you serve them at room temperature. This makes them ideal fare to prepare ahead of time.

We eat this noodle dish as a main. It’s substantial and very filling. But you could use it as part of an Asian feast or take it along to a potluck. It will keep well in a sealed container in the fridge for twenty four hours.

There are a few steps to take for this Korean glass noodle recipe, but once these are done, it all comes together very quickly.

If you have a wok, so much the better. I don’t. So I make do with a large frying pan instead.

Dried shitake mushrooms have more umami flavour than the fresh ones you find in supermarkets. So I recommend you use dried ones if you can. They’re generally a lot cheaper too, especially if you buy them from Asian shops.

You’ll need to soak them in water to rehydrate them before use. Place them in a bowl and pour hot, but not boiling water over them. Cover the bowl with a plate and leave to soak for twenty minutes.

Drain the mushrooms, but reserve the water for later. You may find you need to discard the stalks if they’re tough. Cut the shiitake into slices.

Once you’ve got the mushrooms soaking, mix up the tempeh marinade. Tempeh needs at least twenty minutes to soak up the marinade flavours, but the longer it’s left the better.

In a medium sized bowl, mix gochujang, soy sauce, toasted sesame oil, maple syrup and rice vinegar together. Grate or finely chop the garlic and stir into the bowl.

Cut the tempeh into bite sized pieces and place in the bowl. Stir it through so that you’ve covered every piece with the marinade. Leave to marinade for twenty minutes whilst you get on with preparing the vegetables. Stir occasionally.

Peel and halve the onion, then slice it finely.

Scrub the carrot, but don’t peel it. Top and tail it then cut into julienne slices. The thinner you make them, the softer they will be. There should be some crunch to this noodle dish, so I make mine fairly chunky.

Wash the beans, then take the tops off. You don’t need to tail them as well. Then cut them in half.

Wash the pepper, then core and deseed it. Slice into thin strips. Colourful veg is the key to this dish, so I’ve gone with a red pepper, but a yellow one would look good too.

I’ve never found stir frying beans in their raw state works very well. Maybe it’s because I don’t have a wok, but I find they end up with a rubbery texture which isn’t very pleasant. So I boil my beans first and add them to the other ingredients close to the end.

Bring a pan of water to the boil and add a pinch of salt. Then place the halved beans in, cover the pan and boil for five minutes or until al dente. They should not be completely soft and definitely not mushy.

Drain them in a colander and allow them to steam dry for a few minutes. Don’t throw away the water though, it makes a good addition to soups or any other dish where stock is needed.

Boil a kettle and half fill a large pan with the hot water. Bring to the boil and add the noodles. Push them down until they’re under the water. Boil for five minutes, then drain in a sieve. They should be slightly al dante with a chewy texture. Alternatively follow the cooking directions on the pack.

Whilst the noodles are cooking, make the marinade. Mix the mushroom water, sesame oil, maple syrup and soy sauce together in a small dish.

Rinse with cold water. This helps to keep the noodles from sticking together. Then drain again and leave to drip dry for a couple of minutes.

As the noodles are incredibly long, you need to cut them up with a pair of scissors, or they will be almost impossible to eat. Roughly cut them into thirds. Place back in the pot and stir in the noodle marinade. Leave until needed.

Heat the oil in a wok or large frying pan to a medium high heat. Add the the onions and start stirring. After a minute add the carrots and stir-fry for three to four minutes. Then add the pepper slices and mushrooms and stir-fry for a further two minutes.

Add the cooked beans and tempeh along with its marinade and stir fry for two minutes. If things are looking a bit dry, add some of the reserved mushroom water. There shouldn’t be any excess liquid in the finished dish, but it shouldn’t be dry either.

Finally add the glass noodles with their marinade and stir-fry for a couple of minutes until the noodles have cooked through and everything is hot.

Turn out into a serving bowl or individual bowls and scatter with toasted sesame seeds. Tongs are particularly useful for this.

Thanks for visiting Tin and Thyme. If you make this japchae, I’d love to hear about it in the comments below. And do please rate the recipe. Have you any top tips? Do share photos on social media too and use the hashtag #tinandthyme, so I can spot them.

We eat this noodle dish as a main. It’s substantial and very filling. But it’s traditionally eaten as a side.Use it as part of an Asian feast or take it along to a pot luck.It will keep well in a sealed container in the fridge for twenty four hours.Please note: calories and other nutritional information are per serving. They’re approximate and should only be used as a guide.