Light spongy cupcakes made with wild blueberry jam. They’re topped with white chocolate and mascarpone which is flavoured and coloured with bilberry powder. These wild blueberry cupcakes are worth making for the colour alone, but bilberries do have quite a few health benefits too. 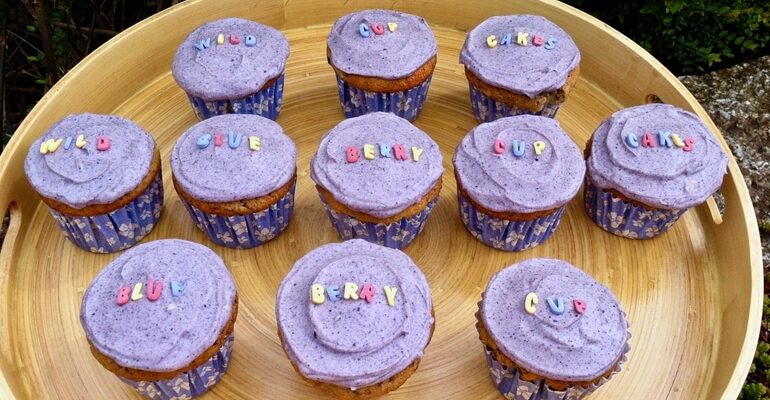 On a recent trip to St Austell, I was quite excited to discover Nature Kitchen. This is a shop dedicated to spices and herbs. What bliss, I could have spent hours there and bought up half the shop if only I had the time, space and money.

One of the purchases I did make, however, was a pot of bilberry powder or ground dried bilberries. Bilberries are the UK’s native blueberry and grow wild around these parts. They’re incredibly good for you, but the season is short and they are often difficult to find. They’re also much smaller than the commercial blueberry that most people are familiar with.

Buying the powder, I reasoned, would not only enable me to give a blueish colour to cake icings, but would imbue me with super powers too!!!

I was eager to try the bilberry powder out as both a flavouring and colouring. So I decided to make some wild blueberry cupcakes at the first opportunity. CT had a pot of wild blueberry spread that he’d been gifted at some point, but it’s been loitering around in the cupboard now for far too long. This was the ideal opportunity to use it. It’s called a spread because it’s made with apple juice rather than sugar so EU regulations prevent it being called jam.

For the cake part of the recipe, I based it on the one given for raspberry cupcakes in Cupcakes from the Primrose Bakery. I substituted the blueberry spread for the stated raspberry jam. And I also used half wholemeal flour as I usually do and made a couple of other tweaks. The icing I made up.

Rather than mixing the jam into the batter completely, I tried to swirl it in so that the finished cakes were streaky. But by the time the cakes were cooked, it was hard to see the difference in colour. So there’s really little point in attempting that step.

These wild blueberry cupcakes went into the last of my favourite blue cupcake cases. I’ve not been able to find them again, so I heaved a bit of a sigh. But really blue cakes had to go into blue cases.

The white chocolate and mascarpone icing was delicious. At first I added the bilberry powder rather cautiously. Just a pinch and then a bit more. But the colour was not as powerful as I thought it might be, so I ended up adding larger quantities until I’d used a rounded teaspoonful.

I used some of the sugar alphabet letters from my recent cake decorating wins to write Wild, Blue, Berry, Cup, & Cakes on the top of the bilberry cupcakes. This was rather time consuming and I’m not sure I’d be so exacting again.

The cakes were delicious, well risen, moist and surprisingly light. The icing was also good and set the cakes off nicely, I thought. I loved the colour, but was a little disappointed that I couldn’t taste anything in the least bit fruity. CT, however, as a seasoned bilberry forager was adamant he could taste the bilberries. My palate obviously requires radical cleansing.

Thanks for visiting Tin and Thyme. If you make these wild blueberry cupcakes, I’d love to hear about it in the comments below. Do share photos on social media too and use the hashtag #tinandthyme, so I can spot them.

Ros chose B as the letter for this month’s AlphaBakes. So I’m submitting my wild blueberry cupcakes to this monthly challenge which is hosted this month by The more than occasional baker.

I’m also adding these bilberry cupcakes to Made With Love Mondays. This is a blogging event created by Javelin Warrior which I keep meaning to enter but never seem to manage. The aim is to encourage people to make everything from scratch rather than use ready made items.

And I’m sharing these wild blueberry cupcakes with Apply to Face Blog for #BakingCrumbs.