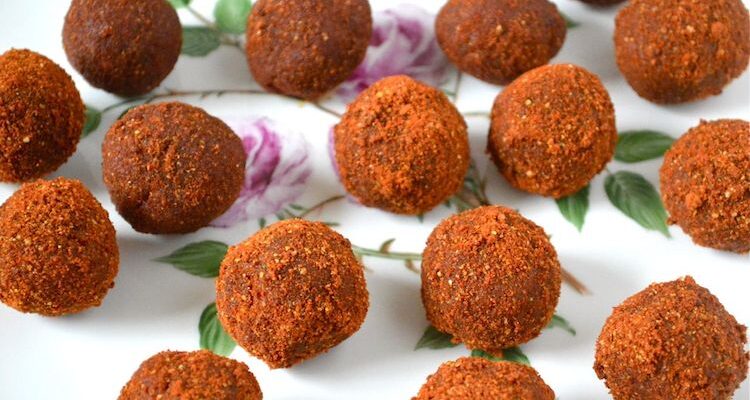 Energy balls are all the rage now. Look in any self-respecting modern “healthy” cookbook and you’ll find at least one recipe for them. There’s a good reason for this. They are easy to make and utterly delicious. I’ve made quite a few over the last few years and these goji berry bliss balls are the latest.

When I need a sugar hit, I find one, or possibly two, energy balls gives me just what I need. They stop me dashing off to the shops for a far less healthy sugar fix. I like to call them bliss balls rather than energy balls, as that really is the effect they have – on me at least. But as well as being delicious, both in taste and texture, they usually contain all sorts of beneficial nutrients.

The Chinese have used goji berries in traditional medicine for over 2000 years. They contain all sorts of phytonutrients, vitamins and trace minerals, including Vitamin A and Iron and are said to be good for boosting the immune system, supporting healthy circulation and preventing fatigue.

Indigo Herbs sell a whole range of high quality and mostly organic super foods via their online shop. I used two versions of goji berries in my recipe. I’ve been buying and eating dried goji berries for many years now, but I’d never come across goji berry powder before.

I was quite excited at the prospect and immediately fancied making goji berry bliss balls and rolling the balls in the goji berry powder. I was expecting it to be red, but it’s actually more amber in colour. Once I got used to the idea, I decided it looked rather fetching. Unlike some powders I’ve tried, it tastes good. It’s slightly sweeter than I was expecting, but has a subtle bitter tone which is typical of goji berries.

I’ve had a packet of lucuma powder lurking in my cupboard for some time now. I bought it the last time I was in Totnes. So it’s now time to try it out.

For those who are unfamiliar with lucuma (and I include myself in this catagory), it is an Andean “superfood” made from the fruit of the lucuma tree. It’s meant to be particularly rich in beta-carotene, niacin and iron.

This pale yellow powder is quite sweet and is used extensively in raw products as a sugar and flour substitute. It also makes the best ice cream ever – apparently! Dipping my finger into the powder, it tastes remarkably like Hunza apricots and it’s quite delicious.

In these goji berry bliss balls I’ve included oats to help balance any sugar spikes from the dates and maple syrup. Normally, I use cashew nuts when I make energy balls, but I substituted some of them with macadamia nuts this time as I had some lying around that needed using up. Macadamia nuts are particularly oily, so although I added a little coconut oil to the mix, it wasn’t really necessary.

Like all of the energy balls I’ve made, these goji berry bliss balls are super simple to make. I chuck all of the ingredients into a blender, my power blender* to be precise and blitz for 20 seconds. If you don’t have a power blender you can make these just as well in a food processor, though the texture will probably be less smooth.

All that’s needed after this, is to roll the mixture into balls and coat with the goji berry powder. The bliss balls will keep in a cool place for a week, assuming you can hang onto them that long. No chance of that happening here. CT’s verdict was “lush”. He particularly liked the their chewy, fudgy personality.

Next Sunday, 26th March is Mothering Sunday. Why not whip her up a batch of these goji berry bliss balls for a delicious and healthy treat. Put them in a pretty box or on an attractive plate and they are good to go. I’ve given bliss balls to my mother on a few occasions and she’s now a big fan.

If you’d like even more ideas for bliss balls, you’ll find plenty of recipes on my Energy Bites board on Pinterest.

Thanks for visiting Tin and Thyme. If you make these goji berry bliss balls, I’d love to hear about it in the comments below or via social media. Do share photos on social media too and use the hashtag #tinandthyme, so I can spot them.

Makes 18-20 balls depending on size.Store in an air tight container. Will keep in a cool place for a week.Please note: calories are per serving. They’re approximate and will depend on exact ingredients used.

This is a sponsored post in collaboration with Indigo Herbs. I was not expected to write a positive review and all opinions are, as always, my own. Thanks to my readers for supporting the brands and organisations that help to keep Tin and Thyme blithe and blogging. The post contains affiliate links. Buying through a link will not cost you any more, but I will get a small commission.