Subscribe and receive my FREE 7 day vegetarian meal plan Subscribe
Home » Reviews » Eating Out, Travel and Events » Events » A Day at River Cottage on the Devon Dorset Border
Share on TwitterShare on FacebookShare on PinterestShare on LinkedInShare on E-mail

A day out at River Cottage HQ on the beautiful Devon Dorset border has much to recommend it, especially when the sun is shining. A few days ago, I had the pleasure of visiting for a second time. There was food, foraging, cooking, photography and a tour. 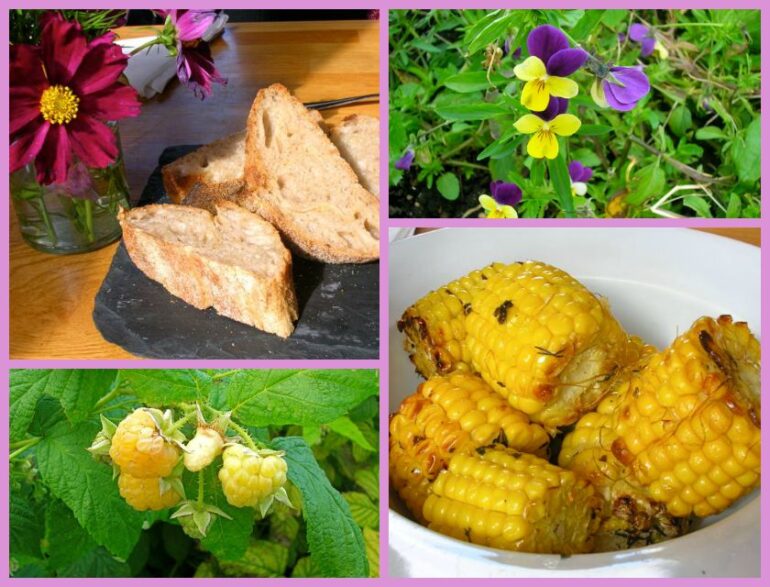 Last year I spent a thoroughly enjoyable day making preserves with Pam Corbin and Liz Neville in the excellently equipped River Cottage cookery school kitchen. Last week’s visit was rather different, but equally, if not more, enjoyable. It was a food blogger’s bootcamp. A food blogger’s what, you may ask? Well!. Fifty (ish) food bloggers from as far away as Aberdeen and as close as, er, Cornwall, got together for a day of workshops, networking, food and fun.

I may not have mentioned the tractor in my previous post as I arrived late and walked from the car park down to River Cottage. As the name implies, the cottage is at the bottom of a rather steep hill. A tractor and trailer is there to ferry arriving guests down to the farm and take them back up again. It’s a good way of getting to know one’s fellow companions as the ride is rather a wild one; the humps and bumps threw us virtually into each other’s laps. It was a really good ‘ice breaker’ and got everyone laughing, exclaiming and chatting.

As soon as we arrived at the farm, we were ushered into a large yurt, complete with hay bales and a log burning fire. Here we learnt the order of the day. This was quickly followed by refreshments in a sunny corner, including some welcome frittata canapés and chocolate pastries. Coffee and tea making facilities along with pitchers of cool water and elderflower cordial were readily available all day long.

Photography Workshop with Capture by Lucy

After a bit of friendly catch-up time, we were divided into three groups and it was off to our first workshop. My group started off with a session on styling and photography with the wonderful Lucy Heath who blogs at Capture by Lucy. She had so much to share and so many tips, we could have done with a full day just with her.

It was a hands on session outside and Lucy was talking as we were taking photographs, so it was impossible to write anything down. The consequence of this is that I can’t remember nearly as much as I’d like to. However, there were a few of tips I did hang on to:

A Tour Around River Cottage

The head gardener, Will Libinstone followed this session with a tour of the farm. This was really interesting and assuaged some of the doubts I’d had on my first visit as to what the farm was really for. The ethos is all about sustainability and local sourcing and the farm is organically certified by the Soil Association. The food grown on the farm feeds the thousands of visitors attending courses and events and anything that is not home grown comes from a 30 mile radius and is provided by small growers and businesses.

The garden is very prettily laid out and was bursting with autumnal bounty. As well as vegetables, herbs and edible flowers, there was also a lot of fruit. We were let loose in the golden raspberry patch and there were many exultant oohs and ahhs to be heard. From the garden, we made an obligatory stop at every gardener’s delight, the compost heap. Will was keen to tell us about the principles and benefits of organic gardening – he didn’t need to convince me.

It was then a wander up the track to see the pigs, chickens, orchards and pollytunnels. The pigs were the stars of the show and I’m sure were the most instagrammed subject to appear that day and probably the next too.

After all this excursion, it was time for lunch and what a lunch it was. A ragout of vegetables with a spelt ravioli filled with cheese and leeks for us vegetarians. The chefs had made pesto from the last of the season’t basil. This they drizzled liberally over our ragout. It was also accompanied by bread and a bowl of sticky chilli and garlic corn on the cob. The layers of flavour were just exquisite and we were all mightily impressed. However, when it came to dessert, silence reigned.

We all agreed, it was amongst the best any of us had ever eaten. Fennel pollen meringue, coffee ice-cream with salted caramel shards, honey roasted damsons and oat crumble. The table was decorated with jars of flowers from the farm and the company was convivial. What more could we ask for? Well we may not have asked, but along came a tray of chocolate truffles, which I, for one, was unable to resist.

The last activity of the day for our group was making butter and soda bread with Chef, Gill Mellor. When I initially heard this, I was a little disappointed. We were food bloggers after all; making soda bread is pretty basic stuff and butter is something most of us have done accidentally by over-whipping cream. However, I should have had more faith. The River Cottage chefs are nothing if not creative.

Once we’d made our butter, we flattened it out and added a layer of edible flowers and/or herbs on top. I picked a few heart’s ease for mine and also nasturtium leaves, but kept a fairly light touch. We then rolled up our respective creations tightly and left them in the fridge to firm up. When I cut mine into slices, it produced a beautiful swirled effect as well as adding interesting flavours.

When you make butter, you get buttermilk. And what better thing to do with buttermilk than to make bread? But first we went foraging for blackberries. Blackberries? Yes, we weren’t making just any old soda bread. Ours was to be a blackberry and apple one with cheese and herbs thrown in for good measure. I managed to break mine up when trying to move it whilst still hot, so I don’t have any photos. However, it was so delicious I made one at home a couple of days later and have now posted a recipe for blackberry and apple spelt soda bread.

After that we had time for a bit more chat and last minute photo taking. Then we went back into the tractor for another bone shaking ride up the hill to the car park.

Other Takes on The Day at River Cottage

Many thanks to Foodies100 for arranging such an excellent day and to River Cottage HQ for being so hospitable and welcoming. They didn’t expect me to write a positive review and all opinions are, as always, my own.