Jump to Recipe
The best vegetarian pizza ever may be a tall claim, but I adore a good winter squash and this homemade crust with a flavoursome chocolate tomato sauce topped off with squash, walnuts and goat’s cheese does it for me. And not just me, CT and my mother were full of praise for this squash, walnut and goat’s cheese pizza and neither of them are vegetarian.

I’m extremely fond of winter squash, it has a sweet nutty flavour and the bright orange colour is just what is needed to brighten things up at this time of year. What with one thing and another, we’ve been unable to grow any this year, so I have to make do with buying butternut squash. These are OK, but not nearly as good as an Uchiki Kuri for example – a round orange Japanese squash with dense sweet orange flesh that keeps well right through the winter. 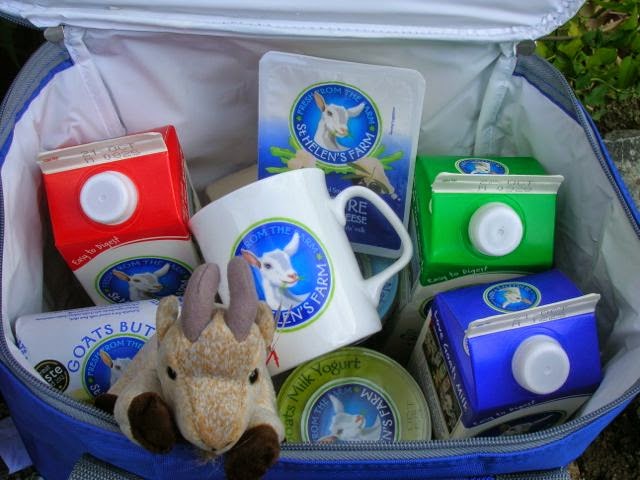 Recently a wonderful goaty hamper turned up on the doorstep, full of good goaty things from St Helen’s Farm in Yorkshire. It was even accompanied by an actual goat. I wasn’t quite certain if she was there to ensure safe arrival or to keep a critical eye on my activities.  I have a real soft spot for these lively, inquisitive and capricious animals. Growing up, I used to spend time on a smallholding and when there it was my job to take the two goats, Starlight and Moonlight out to the fields in the morning and bring them back in the evening. I even had a go at milking them, but have to confess I never really got the hang of it. I also didn’t find their milk delicious. I drank it, but it had quite a strong caprine taste that some people find off-putting. 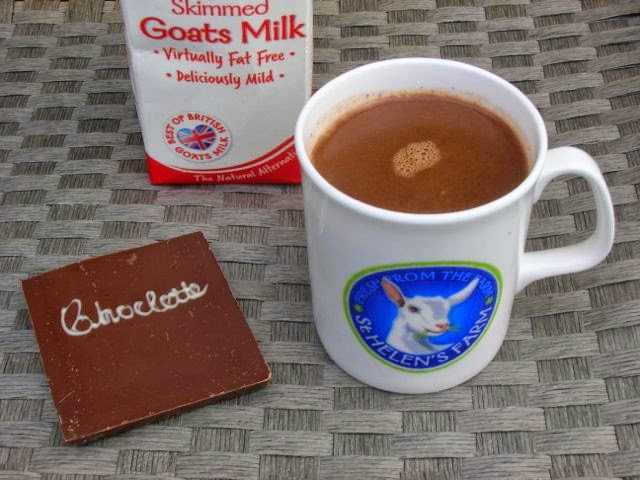 I was very pleased to find that this was not the case with the milk from the good goats of St Helen’s Farm. There is a bit of a goaty tang, but nothing too distracting and it gives the milk character making a welcome change from cow’s milk. “Deliciously mild, it states on the pack and we could not disagree. This is good news as goat’s milk is not only nutritious, but has a structure similar to human breast milk which makes it more easily tolerated by people with a lactose intolerance. It is also quite nutritious with more calcium, potassium and vitamin A than cow’s milk. The skimmed milk made a most delicious breakfast smoothie with banana, oats, chia seeds and raw cocoa powder. We also used it to make porridge, where it worked to good effect. The semi-skimmed milk was perfect for making hot chocolate, which at this time of year is, quite frankly, essential. Very thoughtfully, our little goat brought a couple of mugs along with her, so we were able to sip our beverage whilst admiring her sister nannies. We saved the full fat milk for pouring on our muesli and for a recipe that will be appearing at a later date.

I’m a bit of a purist when it comes to yogurt – I like it natural. So, I was slightly hesitant about trying the yogurt pots with fruit. The yogurt made up the bulk of the pot, with a layer of fruit puree at the bottom. I liked this, as not only did it look pretty, but I was able to try the yogurt on it’s own and then mix as much or as little of the puree as I desired on each spoonful. The yogurt with mango and lime was my first choice – I’m a sucker for mango. The yogurt was smooth and creamy all on its own and the limey mango gave bursts of flavour which were veryt welcome indeed.  I’m a convert and thought this made a very nice dessert. This came together with a pot of blueberry & rosehip, which was nice, but not as lively. Pots of yogurt stirred with honey are sitting invitingly in the fridge. The pots weigh 125g and come in packs of two.

The full fat live yogurt was absolutely delicious and it didn’t taste in the least bit goaty. It was mild and creamy and fabulous eaten just as it was. However, we did use some of it to top our breakfast muesli and to accompany a curry and it enhanced both. We also had a pot of 0% fat goat’s milk yogurt and whilst I’m not normally a fan of fat free, this one was quite tasty. It worked best in smoothies and in cooking, where I found that it didn’t separate out as much as ordinary yogurt does.

There was also a pack of butter in the hamper, which I’m looking forward to trying. I’ve been holding off doing so, however, as I’m saving it for the recipe mentioned earlier.

For the pizza, I used “Mild and Creamy Goats Cheese”, which wasn’t creamy at all. It was a hard cheese with a grainy texture; it had bite and depth with a good, if mild, flavour. I thought it quite delicious and happily polished off the remaining half in my cheese sandwiches. As I am a big cheese fan, I was really pleased to have a 240g pack of their mature version too. This was very similar to the mild, but with more depth and flavour. It reminded me of a good cheddar and can be used in exactly the same way. I was planning on using it with some of the butter to make goat’s cheese scones, but it went the way of the first and was consumed with relish along with my homemade bread and apple chutney.

Cooking with Herbs this month is all about parsley, sage, rosemary and thyme. Well I used two of these in my pizza, so I’m happily sending one off  to Karen over at Lavender and Lovage.

Very sensibly Shaheen, over at Allotment 2 Kitchen has chosen Halloween colours for this month’s Vegetable Palette. October is a month full of colour and pumpkin bounty and my squash pizza fits right in.

With pumpkin very much in season this month, I’m also sending one of these off to Ren Behan for Simple and in Season.

For this pizza I used the butternut squash that was left over from making my pumpkin, pecan, chocolate cake. It also used a handful of tomatoes that had grown “wild” in our plot, but were a little past their best. So one of these also goes to Vohn’s Vittles where this month’s No Food Waste Challenge is being hosted on behalf of Elizabeth’s Kitchen Diary.

It’s been a while since I submitted anything to Recipe of the Week, so I’m sending one of these off to Emily at A Mummy Too.

Many thanks to St Helen’s Farm and Purple Cow for the hamper of delicious goat’s milk products. I was not required to write a positive review and as always, all opinions are my own.